“You showed yourself to be a man of honour. You inherited that trait from your mother.”
— Morgause to Arthur[src]

Queen Ygraine Pendragon (née de Bois) was Queen of Camelot through her marriage to King Uther Pendragon, but died giving birth to their son, Arthur Pendragon. She unknowingly became the stepmother of Uther's secret daughter Morgana Pendragon. Whether Uther's affair with Morgana's mother, Vivienne, was before or after his marriage to her is unknown. She was the younger sister of Tristan and Agravaine, and posthumously became the mother-in-law of Guinevere Pendragon through her son's marriage.

The youngest child and only daughter of her family, she grew up with her two older brothers, Agravaine and Tristan who were both close to her and protective of her. It is also presumed that she was close friends with Vivienne and well knew Gorlois.

Sometime in her early life she met Uther and fell in love with him.

Sometime after Uther became King of Camelot, he married Ygraine de Bois, thus making her his queen. A traditional jousting tournament was held in Camelot before Uther's marriage to Ygraine.

Ygraine and Uther were friends with the High Priestess Nimueh. After discovering Ygraine was unable to have children, Uther sent Gaius to ask Nimueh to help them. Nimueh agreed and used magic to allow Ygraine to conceive a child, thus producing a son and heir, Arthur Pendragon. Although Nimueh knew that by using magic to create a life, another life had to be taken in exchange, she claimed that she did not foresee that Ygraine's life would be the price. Ygraine died in childbirth and because of the loss of his beloved wife, a grief-stricken Uther turned on Nimueh, accusing her of treason and banishing her from Camelot. He then began the Great Purge, ordering the execution of hundreds of sorcerers, both good and evil.

After Ygraine died in childbirth, her brother, Tristan, blamed Uther for her death and challenged him to a duel to the death. Uther won the duel but, before he died, Tristan swore that he would rise from the dead and have his revenge. Now having lost two siblings to the Pendragons, Ygraine's second brother, Agravaine, hated both Uther and Arthur and began to foster a grudge that would last throughout the rest of his life. Not with the knowledge of Uther killing Tristan, Arthur trusted Agravaine and was soon betrayed by him when he revealed that he was actually working with Morgana as a spy.

A brooch engraved with her sigil belongs to the sorcerer Merlin, given to him by her son Arthur.

Morgause later used a spell to make Ygraine appear when Arthur wished it as a reward for passing her test, and Ygraine then told Arthur about his past. However, the apparition of Ygraine was part of Morgause's plot to turn Arthur against his father and claimed that Uther went to Nimueh with full awareness that Ygraine's life would be sacrificed for Arthur to be born, which would be contradictory to Uther's subsequent hatred towards magic due to the death of his wife.

It is unknown if the Ygraine that appeared was the true Ygraine, but given Morgause's treachery, it may have been a false representation of her that meant that Arthur returned to Camelot and nearly slaughtered his father. Only when Merlin told Arthur that Morgause had lied did Arthur cease his attack on Uther, leading him to believe that his father was not to blame for Ygraine's death (The Sins of the Father).

Later, when Morgana used a Mandrake Root to make Uther lose his mind, he hallucinated Ygraine calling to him for help from inside a well. He continuously saw his dead wife again, this time surrounded by other younger victims - victims whom he had drowned in the Great Purge. The visions disappeared when Merlin removed the Mandrake Root from under his bed and destroyed it (The Tears of Uther Pendragon).

It appeared that Ygraine was a much loved queen when she was alive. She was potentially more tolerant with magic-users than her husband ended up being because of the statement that Morgause made about Ygraine being a woman of honour.

Morgause also claimed that she knew her very well and seemed to think well of her, which would suggest Ygraine was not adverse to magical beings. Ygraine also seemed selfless, devoted, and loving towards her family, since when Arthur finally met Ygraine after Morgause conjured her spirit to speak with him, she told him that she was very proud of him and that she would willingly give her life for him again (although this implies that she died unwillingly to begin with).

However, Ygraine claimed that Uther knowingly sacrificed her to get a son, and whether Ygraine honestly believed this or not is unknown since Morgause's ulterior motive was to get enrage Arthur and cause him to kill Uther Pendragon.

Therefore, it is unclear whether the summoned version of Ygraine was a genuine representation of her as she was in life. 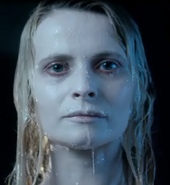 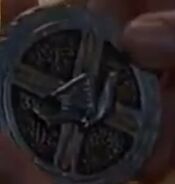 Sigal from Ygraine (from a deleted scene)
Community content is available under CC-BY-SA unless otherwise noted.
Advertisement