With All My Heart is the ninth episode of the fifth series of Merlin.

The warlock is determined to break Morgana's twisted control over Gwen. But it will be no easy task, even for Merlin, as only the most powerful magic can save the Queen - and the high priestess will not give up her puppet without a fight.[2]

Gwen is leaving the castle to meet  Morgana however she is stopped by Percival who asks her where she is going so she lies by saying she is leaving so she can be close to Elyan and Percival is fooled by her and allows her to leave. She is later seen in the forest talking to Morgana and telling her a plan to kill Arthur however Arthur and Merlin overhear all this and Arthur is shocked and horrified by Gwens betrayal and is ready to attack however Merlin stops him saying they need to find a way to free Gwen from Morgana control and Arthur agrees.

Back in Camelot  Gaius talks to Arthur and convinces him to use magic to restore Gwen however he reveals the Sorcerer  will be a woman which will force Merlin to use a womans disguise. Gaius the privately tells Merlin about an ancient ritual which was used on Gwen called the Tiene Daga which would bind the victims will to the high priestess by instilling horrific fear in them causing them to become a former puppet of themselves and suggests to Merlin that he travel to the Dochraid to find an answer however he warns him to use a disguise when visiting her so she doesn't realize who he is. Merlin becomes  Dragoon the Great and visits her with Excalibur and asks how Gwen can be freed.

The Dochraid recognizes Merlin by smelling his hand and knows of his intentions since the earth spoke to her, and refuses to help the warlock, for Emrys is no friend of the Old Religion or of Morgana. Merlin threatens her with Excalibur, the only weapon which could kill a creature of the earth such as the Dochraid. She thinks that he doesn't have the power to use it however he does and wounds her on the arm. With the sword at her throat, the hag tells Merlin Gwen is doomed her spirit consumed by the Teine Diaga and bound to the Silver Wheel for all eternity. Her body is nothing but an empty vessel, filled by Morgana's will.

To free the Queen's spirit, a thing that only the most powerful sorcerers could hope to attempt, Merlin would have had to travel to the Cauldron of Arianrhod and there use all his powers to summon the The Triple Goddess herself. The waters of the Cauldron held the Goddess' powers and only their touch could heal her, but Gwen would have had to enter the lake willingly; if she were tricked, forced or beguiled, she would fall into the abyss and be lost forever. After having obtained this information, Old Merlin is  ready to depart, but the Dochraid cast a spell on a dagger and sent it flying towards him. Merlin deflected it with magic and stabbes the creature with Excalibur severly wounding her. Some time later, the Dochraid recovers and cast a spell to take strength from the earth, curing herself. She then sends raven to Morgana, informing her that Emrys is going to thawrt her plan.

Merlin relays this information to Gaius who says that they must tell Arthur which they do and  they conspire to drug Gwen using Belladonna which Merlin and Arthur are forced to taste then while Gwen and Arthur are dining they slip the belladona in to Gwens drink and knock her out.

Merlin leaves Mordred behind and catches up with Arthur who says they must go back however Merlin convinces him not to and they leave. Morgana gently strokes Mordred head however he wakes up and stands before her as she demands the identity of Emrys however Mordred refuses to tell her and says he willingly supports Arthur and knocks her out using magic.

Merlin leaves Arthur and dresses up as a woman and uses magic to disguise himself as an old woman called Dolma. Mordred returnms and meet Arthur who thought he was lost  Arthur and Mordred are taken by surprise when they first met Dolma due to her interesting clothes and 'familiar face'. To cover up Merlin's disappearance she syas  that "the gangly boy" is her surety and will be returned when the ceremony has concluded.

Dolma the uses Magic to awaken Gwen and begins the cermony as Gwen wakes she is taken aback in shock and demands to know where she is. Arthur tries to bring her into the Lake forcefully however Merlin reminds him she must enter of her own will and Arthur recites a huge speech saying how much he loves her. This touches Gwen and she willingly enters the lake and is purged.

After the ceremony has finished and Gwen returns to her original state, the King and Queen thanked Dolma for her help. In return she asked that Arthur remember that it was magic which saved Gwen; pointing out the nature of magic was determined by the wielder and not magic itself. As they began to walk away she reminds them that they had forgotten Merlin. She finally tells Arthur that one day he will recognise the true worth of those around him and with a small wave Dolma runs away to change back into Merlin.

While riding back to Camelot, Mordred tells Merlin that he knew that Merlin had been the one disguised as Dolma. 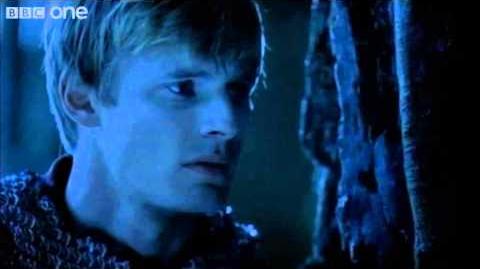 Retrieved from "https://merlin.fandom.com/wiki/With_All_My_Heart?oldid=175594"
Community content is available under CC-BY-SA unless otherwise noted.