Merlin Wiki
Register
Don't have an account?
Sign In
Advertisement
in: Creatures, Animals, Enemies and Villains,
and 6 more

Lancelot and Guinevere
The Darkest Hour

Wilddeoren are very large, carnivorous rodents that live in the Tunnels of Andor. Though blind, they're able to use their senses of hearing and smell to find prey.

A pair of lethal Wilddeoren were kept as pets by the bandit Hengist, who used them to dispose of unwanted guests. It was Hengist who ordered the ransom of Guinevere, who he mistakenly believed was the Lady Morgana. While being held prisoner at his hideout, Gwen witnessed her old friend Lancelot duel another fighter for Hengist's and his mens' entertainment. Lancelot won and was shown mercy, but his opponent was fed to the Wilddeoren. The same fate befell Kendrick when Hengist learned that Gwen was not Morgana, but her serving girl.

Meanwhile, Arthur and Merlin had set out to rescue Gwen and decided to take a shortcut through the Tunnels of Andor, which were known to be infested with Wilddeoren. Before they entered the tunnels, Arthur smeared himself and Merlin with Gaia Berries in the hope that their foul stench would hide their presence from the Wilddeoren, who relied on their sense of smell to find prey. His plan worked and they escaped the tunnels without being eaten.

Merlin and Arthur arrived at the bandits' hideout to find that Gwen and Lancelot had been sentenced to death and were about to be fed to the Wilddeoren. Fortunately, they were able to rescue them. As the group made their escape, Hengist entered the Wilddeoren's cage to stop them and Merlin used his magic to lock him inside, where he was subsequently devoured (Lancelot and Guinevere).

Two years later, while on a quest to the Isle of the Blessed, Arthur and the Knights of the Round Table decided to take a shortcut through the Tunnels of Andor. As the tunnels were still infested with Wilddeoren, Arthur once again relied on the Gaia Berry trick to grant them safe passage. The technique worked well until Gwaine panicked and killed one of the Wilddeoren after it began sniffing him for an extended period of time. The Wilddeoren's death cry alerted the rest of its pack to the group's presence and they were forced to flee (The Darkest Hour).

Wilddeoren were very large, rodent-like creatures that Arthur once noted resembled giant baby rats. They had sparse fur, huge teeth, and a taste for human flesh.

Wilddeoren were also completely blind, and as such relied on their senses of hearing and smell to find prey. Arthur and Merlin were able to use this to their advantage by smearing their faces with foul-smelling Gaia Berries. Though a Wilddeoren nosed at and slobbered all over Merlin, the berries successfully disguised their scents and they were able to travel through the Tunnels undetected.

Arthur tried to use this a trick second time while traveling with the Knights of the Round Table. However, it failed when Gwaine killed a Wilddeoren that sniffed him and alerted the rest of the pack to their presence (Lancelot and Guinevere, The Darkest Hour). 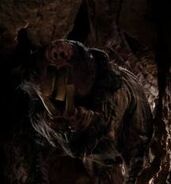