"The Eye of the Phoenix"

"The Eye of the Phoenix"

Warwick Davis is the actor who portrayed Grettir, the gatekeeper to the lands of the Fisher King in the episode "The Eye of the Phoenix" in Series Three of BBC's Merlin. He is also widely known for playing Professor Flitwick in the Harry Potter film series and for playing the title character in the movie Willow.

In 1983, he was cast as Wicket the Ewok in George Lucas' Star Wars Episode VI: Return of the Jedi. In 1988, he portrayed Willow Ufgood, the main protagonist in the film Willow. He had two roles in Star Wars Episode I: The Phantom Menace, where he played the Rodian Wald and a human (seen with Watto during the Podrace). In 2005, he appeared in The Hitchhiker's Guide to the Galaxy as Marvin the Paranoid Android. The character was voiced by Alan Rickman.

Davis has also played Professor Flitwick and the goblin, Griphook, in the Harry Potter film series.

In 2006, Davis guest-starred in an episode of the comedy series Extras, in an episode in which Daniel Radcliffe, played himself, performed a spoof of Harry Potter; Davis (also appearing as himself) played a magical creature in the spoof.

Warwick Davis is also notable for starring himself in the 2011 TV series Life's Too Short. 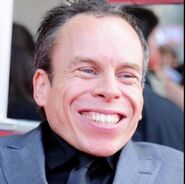 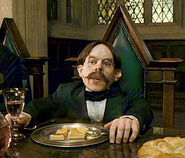 As Professor Flitwick in Harry Potter 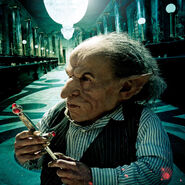 Warwick Davis as Griphook in Harry Potter
Add a photo to this gallery
Retrieved from "https://merlin.fandom.com/wiki/Warwick_Davis?oldid=213218"
Community content is available under CC-BY-SA unless otherwise noted.