This article is about the episode Valiant. To see the page on the character, see: Valiant.

“I just saw one of the snakes on Valiant's shield come alive!”
— Merlin to Gaius

Valiant is the second episode in the first series of Merlin which was first broadcast on 27 September 2008. Not counting the end of the previous episode, it marked Merlin's first few days as Arthur's servant.

Camelot is hosting an annual Tournament, and knights from throughout the realm have come to compete for its coveted title.  Among those hoping to win the crown is the Knight Valiant. Armed with a magical shield, he will stop at nothing to win his prize, even if it means killing Arthur! Merlin tries to expose Valiant as a cheat to save Arthur's life, but even those closest to him do not believe his claims...

Knight Valiant, a renowned warrior of Albion, procures a shield decorated with three painted snakes that have been enchanted to come to life upon his command. After killing Devlin, the sorcerer that sold him the shield, Valiant rides to Camelot and enters the annual Tournament, the defending champion of which which is Prince Arthur Pendragon.

Meanwhile, Arthur rehearses his swordfighting with his manservant, Merlin. Later, in the physician's quarters with Gaius, Merlin uses magic to summon a scroll that he must learn before the Tournament, and Gaius warns him not to be caught using sorcery. When Merlin laments his work as Arthur's servant, Gaius informs the boy that the Prince is under a great degree of pressure in his role as the future king of Camelot. The next day, King Uther Pendragon begins the Tournament, and both Arthur and Valiant easily defeat their first several opponents.

Merlin later uses magic again to complete his long list of chores for Arthur and spends the rest of his time studying from the book of sorcery that Gaius gave him. Meanwhile, Valiant is introduced to the king's ward Morgana and flirts with her, promising to win the Tournament so that he can have the privilege of escorting her to the celebratory feast afterwards.

While replacing Arthur's body-plating in the knights' armoury the next morning, Merlin hears the sound of snakes hissing and examines Valiant's shield to find one of the snakes blinking. Valiant arrives and prevents Merlin from inspecting further, and Merlin manages to escape the armoury without arousing further suspicion. Arthur praises Merlin's work on his armour, while Merlin privately admits to enjoying his job at the castle. During the day's fighting, Valiant faces a difficult opponent in Knight Ewan but manages to pin him beneath his shield, commanding the snakes of his shield to strike. Valiant wins the duel, and Ewan is taken to the physician's quarters to be treated. Gaius discovers a snakebite, and Merlin deduces what has happened.

Merlin heads to Valiant's private quarters to spy on the knight, and sees him feed live mice to the animated snakes on his shield. Merlin informs Gaius of his discovery, but Gaius cautions Merlin not to accuse Valiant of using magic to cheat until he can prove the allegation. The Tournament progresses, and the final duel is set: Arthur will face Valiant in defence of his title as Champion. Gaius concedes to Merlin that Valiant must be stopped from killing Arthur, and concludes that brewing an antidote to the snakebite will heal Ewan so that the knight can testify before the King. Valiant and the knights dine with Uther, and the King offers Valiant a place with the Knights of Camelot once the Tournament ends. Meanwhile, Merlin returns to Valiant's quarters and examines his shield, provoking one of the snakes to lash out; Merlin decapitates the snake and flees with the head.

Merlin delivers the snake's head to Gaius in order for the physician to brew an antidote, then proceeds to inform Arthur about Valiant's deception. He gives Arthur his word that he is telling the truth, prompting the Prince to request an audience with his father. After Gaius administers his antidote, Ewan awakens and confirms the magical nature of Valiant's shield; when Gaius leaves for a moment, Ewan is attacked by another of the snakes, this time fatally. Speaking before the court, Arthur accuses Valiant of sorcerery and presents the snake's head as evidence, but Uther's inspection of the shield reveals nothing insidious.

When Gaius and Merlin then arrive and inform Arthur that Ewan is dead, Arthur recants his accusation and apologises. Uther orders Merlin's arrest, but Valiant entreats the King not to punish Merlin on his account. Valiant offers Arthur the opportunity to concede the Tournament, but Arthur refuses. A devastated Arthur orders Merlin to leave his room and fires him as his servant, but Merlin visits the dragon beneath Camelot, who claims that the wizard's destiny lies with Arthur. Gwen encourages Merlin to pursue the truth, and Merlin strikes on a way to expose Valiant's deceit, searching Gaius's book for a spell capable of bringing inanimate objects to life. He tries to convince Arthur to forfeit the Tournament lest he die at Valiant's hand, but Arthur insists that doing so would mark him as a coward, destroying his ability to lead his soldiers in battle. Risking his own life, Arthur refuses to forfeit, accepting his fate as a duty of his position as Prince.

Merlin spends the night practicing the Animation Spell from Gaius's book on a granite statue of a dog, perfecting it by morning and turning the statue into a living dog. On the Tournament pitch, Arthur and Valiant battle fiercely, eventually shedding their helmets to the delight of the spectators. Merlin watches the two clash from afar, incanting the Spell to invoke the snakes on Valiant's shield and uncover his deception before the crowd. From the grandstands, Morgana throws a second sword to Arthur, who uses it to behead the snakes and impale Valiant, killing him and securing his title as reigning Champion. At the feast that night, Morgana teases Arthur about being rescued by a woman, and he arrogantly declares that he needed no help. Arthur then obliquely apologises to Merlin, rehiring him as his royal manservant.

Morgana at the tournament

Merlin at the tournament

Gwen and Morgana watch the tournament

Gwen and Morgana watch on

Arthur makes an accusation against Valiant

Gaius in his chambers

Morgana wakes from a nightmare 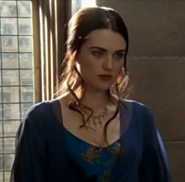 Valiant received an audience rating of 4.92 Million (30.6%) but soon reached to 6.41 million through out until the end of the episode.

Rate this episode!
Retrieved from "https://merlin.fandom.com/wiki/Valiant_(episode)?oldid=179669"
Community content is available under CC-BY-SA unless otherwise noted.