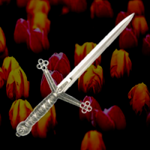 Please leave a message below. Keep in mind that talk pages are for conversations: If you contact me here, I will reply here; and if I wrote something on your talk page, please reply there.

Hi, welcome to Merlin Wiki! Thanks for your edit to the Knights of Camelot page.

Just put the file name next to the "image" parameter (you can take a look at the Alator source for an example). It's easiest in source mode, but if you want to do it in visual mode, hover over the template, click edit and look for the image field. The infoboxes used here are rather basic and I haven't gotten around to improving them yet, so you may have to adjust the size of the image so the box doesn't expand unnecessarily; I used 220px for Alator, which is actually a bit smaller than it needs to be. --Tulipclaymore 16:21, November 10, 2011 (UTC)

To you who keeps making edits on Arthur's page, Arthur only had one real love, Gwen! He was enchanted twice and he was engaged to elena and mithian, but he broke off those engagements for gwen, which means he is in love with gwen. He is not currently in love with gwen, he has always been in love with gwen, so if you can prove otherwise, stop changing my edits.

You must have me mistaken for somebody else. I undid one of your revisions, primarily because you deleted the infobox. That said, it is true that Arthur occasionally professed interest in other women in the show, most recently with Mithian. As of the last episode, Gwen is not Queen, and we don't know (100%) what is going to happen. --Tulipclaymore 23:29, December 13, 2011 (UTC)

Have you not read the legend, Guinevere is supposed to be Arthur's wife and queen. He liked Morgana in season one, but since then his only interest has been Gwen. Are you even watching the show! Tns31091 23:33, December 13, 2011 (UTC)

I am. Are you? The creators are following the legends (plural) when they feel like it. They've already significantly altered Lancelot's usual role and butchered the character of Percival; who knows what else they're up to. Of course it's likely Arthur will marry Gwen at some point in the future, but we can't know for sure that it's going to happen until it happens or it's confirmed by one of the actors or show staff or whoever. --Tulipclaymore 23:41, December 13, 2011 (UTC)

Many merlin's plots are not given away, but people have leaked pictures from filming of guinevere wearing her queen gown! And... what makes me think that is you seem as though you don't want them to marry, and you said that those other princess were Arthur's love interest when he was really enchanted, it seems to me you wanted mithian to be with Arthur. And yes, I have seen every episode that is how I knew arthur was enchanted beforeTns31091 23:49, December 13, 2011 (UTC).

First off, it's a television show. I don't really care who ends up with whom as long as it results in a good story. And in any case, my personal opinions (and yours) have no bearing on the matter; the wiki needs to accurately depict what happens in the show, not what I want to happen. Secondly, you appear to be confused on exactly what I did yesterday. I did not "[say] that those other princess were Arthur's love interest" (which, by the way, is arguably true, because 'love interest' is a neutral term used to describe characters in a fictional text); I clicked one button to restore a rather important section of the page you managed to delete with your edits (unintentionally, I assume). The rest of your changes were basically collateral damage. I haven't touched the page since (though you really should reword the sentence in question). --Tulipclaymore 09:39, December 14, 2011 (UTC)

Hey a-hole, u think ur so big at the mlp forum. Let me tell u this, the ONLY proof you need for Daring-Do's voice actress is comparing the voices with other characters. Chiara Zanni is the TRUE voice actress for Daring-Do. Other bronies know this not by "official proof", but because the can ACTUALLY tell who the voice is. And heres a message for Kinrah, that SOB, when u talk to him: I'll be coming after him where he leasts expects it, I promise him that! Have a failing like you SOB!!!

Retrieved from "https://merlin.fandom.com/wiki/User_talk:Tulipclaymore?oldid=45713"
Community content is available under CC-BY-SA unless otherwise noted.