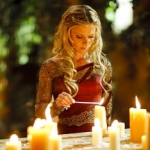 Hey there, thanks for stopping by my profile. I discovered Merlin just a couple years ago, actually, when I was messing around on Fanfiction.net and came across a Merlin story. I liked the characters and general concept, so I took a chance and bought the first season on DVD and it quickly became one of my favorite shows. I didn't even bother to wait until I was through with the first series to buy all the rest. xD

Retrieved from "https://merlin.fandom.com/wiki/User:November_Witch?oldid=210781"
Community content is available under CC-BY-SA unless otherwise noted.