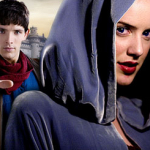 Nimueh, the priestess of the old religionEdit

Nimueh, was a High Priestess of the Old Religion. An opponent of Uther Pendragon, she devised a number of schemes to wreck his kingdom before she turned her attentions onto Merlin, a young warlock, and Arthur, Prince of Camelot. She is my favourite evil of Merlin, appeared in Series 1 and killed at the end by the sorcerer Merlin. I also prefer the character of the protagonist of Series, Merlin. For this reason i decided to give this name on this wikia.

Other my favourite pages and charactersEdit

Retrieved from "https://merlin.fandom.com/wiki/User:MerlinNimueh?oldid=213660"
Community content is available under CC-BY-SA unless otherwise noted.