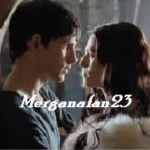 While I adore Merlin and Freya (they are just too cute) I have to admit that I really like Merlin and Morgana together. I blame my Mergana fascination entirely on The Nightmare Begins and A Servant of Two Masters. Such chemistry between those two...

I preferred series two Morgana to any other. I think that the inner conflict really made her a much deeper character. Series three she seemed like she had been completely brainwashed, and series four she bordered on unhinged.

Retrieved from "https://merlin.fandom.com/wiki/User:Merganafan23?oldid=174300"
Community content is available under CC-BY-SA unless otherwise noted.