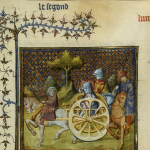 The inspiration of Arthur and Mordred confrontation in the finaleEdit

It's plausible that the last episode of the show takes his inspiration from Excalibur (1980, John Boorman) for the ultimate confrontation between Arthur and Mordred.

Only one line and it's Mordred who gets it ; only one shot, as if the two of them were ready to comply with the prophecy even if they never heard a word of it.

I left the last dialogue between Arthur and Lancelot, because we learn that Lancelot is redeemed and proclaimed the most noble knight of the Round Table, and that Guinevere became queen again. In this version of the legend (based on Thomas Malory's novel), Merlin is trapped in a cave, Guinevere is left alone on the throne, the knights are all dead and Percival, who is the last companion of Arthur in his deathbed, throws Excalibur in the lake (this time, not Girflet, not Bedivere, not even Merlin).

The healing skills of MerlinEdit

I'm amazed that, despite Merlin being the most powerful sorcerer to have existed and saving Arthur's life many times, he fails to heal him, relying on someone else, in:

He succeeds only once,

in Aithusa, where Borden flings something poisoneous into his stew and he and the knights consume it.

If he didn't heal Uther (A Remedy to Cure All Ills), Morgana (The Crystal Cave), Uther again (The Wicked Day), we would say that healing is his weakness. Unless we object that to heal Uther, he needed the assistance of Gaius, and to heal Morgana, the assistance of the Dragon. Then, perhaps healing is not his forté. He is skillful to kill his opponents, but not to heal people, especially Arthur. He can save him, but not heal him. Anyway, it's quite strange- the most powerful warlock ever is a poor healer.

Why is it so difficult to find out about Merlin's magic ?Edit

This episode is named after the fantasy novel (1970) by Mary Stewart. It seems to be a tribute to this novel, but the connection between the film and the novel is not obvious.

O Merlin in your crystal cave

Deep in the diamond of the day,

Will there ever be a singer

Whose music will smooth away

The furrow drawn by Adam's finger

Across the memory and the wave?

Or a runner who'll outrun

Break through the gate of memory

And hang the apple on the tree?

Will your magic ever show

The sleeping bride shut in her bower,

The day wreathed in its mound of snow

and Time locked in his tower?

The knighthood and the knight's codeEdit

For the meeting between Merlin and Balinor. The writers made Balinor one of the deepest and most complex characters of the series, in just fifteen minutes. A Tour De Force! The performance of John Lynch was awesome.

For one of the most overwhelming, heartbreaking, distressing moment of the whole series. When Merlin is bent crying over his dying father and, in this very time, must hide his feelings from Arthur.

The huge misunderstanding was an absolute delight. Morgana didn't know she was the source of the magic and Merlin didn't know that she didn't know and thought that she'd turned evil. Morgana didn't understand why Merlin, the kindest person in the world, and her close friend, would poison her. Poor Arthur, as well! He didn't have a clue of what was happening at the stage; not even slightest idea of the forces surrounding him.

So far, until todays, one the best thriller of the series. Three characters trapped in the Castle of Sleeping Beauty during thirty minutes. This episode is unlike any other. I dream of another like this.

One question though.. how was it possible that Morgause did not wonder how Merlin managed to know the truth about the source of the magic?

The Eye of the PhoenixEdit

If the adjective "marvelous" fits to one episode only, it's this one. A Perilous Quest, scary beasts, the great myth of the Wasted Land, wild country, a valiant Prince, action, magic, emotion. All this in one episode, it's more than we could wish, a visual enchantment. 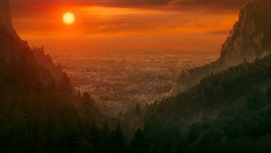 Many of us may find a LOTR's style 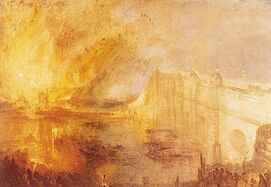 It pleases me to find a more Turner's 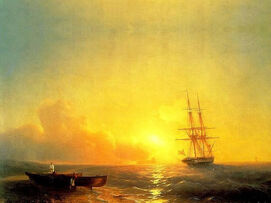 A Vessel on the Ocean 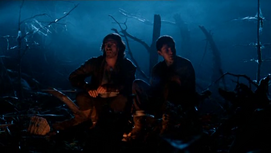 The alchemy between Gwaine and Merlin is perfect. Pheasant ?
Add a photo to this gallery

The Sins of the FatherEdit

The confrontation between Arthur and Uther was stunning. One of the best performances by Bradley James. As usual, Anthony Head was superb. I liked the way he said, nonchalantly: "Morgause told you this? She's lying." The scene was breathtaking. 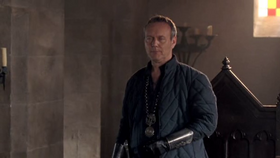 Morgause told you this ? She's lying 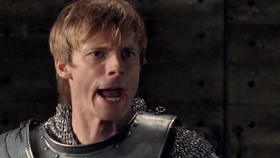 'You're an hypocrite and a lier ! Such an intensity in the voice !' 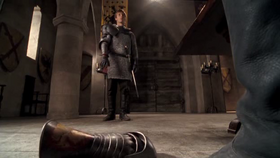 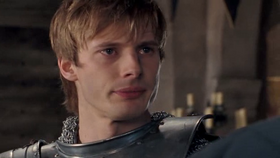 I will strike you were you stand. The face of B. James ! What a catch ! 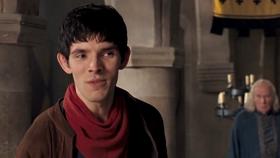 I fear that there's no great scene without Merlin. He was incredible !
Add a photo to this gallery

First of all, for one of the most thrilling confrontations between Merlin and the Dragon. We see how Merlin became a very confident young man, and is not afraid of abusing his power (the dark side). I love the way he said: "I command you".

Is there really a part of Merlin who enjoy Morgana's death ?

I will not save her

I am a Dragonlord, you cannot refuse me !

How dare you to treat me such ?

I command you
Add a photo to this gallery
Second, for the Crystal cave itself, it was fascinating and we understand the fascination melted with terror of Merlin. The following dialogue between Merlin and Arthur, who didn't have a clue of what happened while he was completely out, was brilliant.
Third, the treachery of the crystals.

The Tears Of Uther PendragonEdit

The Servant Of Two MastersEdit

A Remedy to cure all IllsEdit

Love in the time of the DragonsEdit

The Sword in the StoneEdit

The worst creatures of the seriesEdit

The making of this creature is a complete failure, a catastrophe. The scenes between the Griffin and Merlin, then between Lancelot and the Griffin are at least pathetic, awful; especially when Merlin, lying on his back, is waiting to be killed by the Griffin, and when Lancelot strikes a blow against the creature. 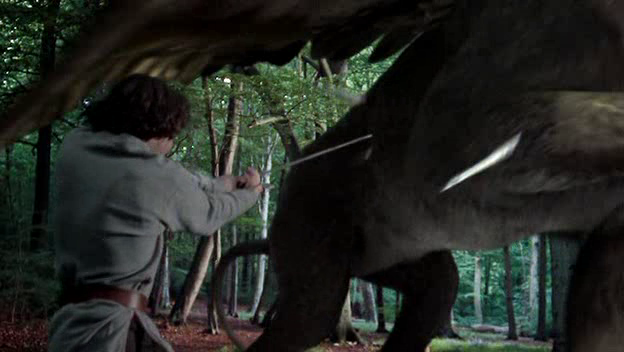 Cinema is unforgiving. Everyone sees that Lancelot is not facing the Griffin, just a green screen.

Look at this beast... 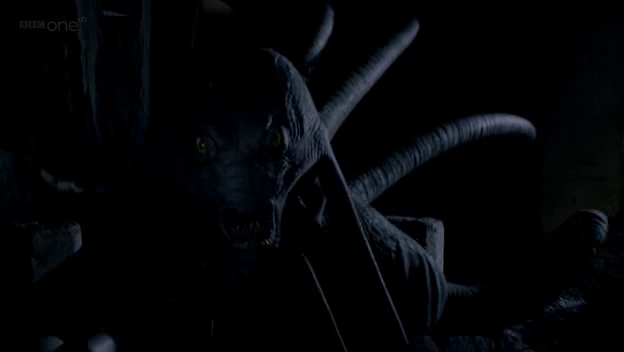 It reminds me this other one:

Glass eye and plastic body. It's not scary, just laughable. By the way, why would such an alien have anything to do with the Old Religion and the Arthurian Legends?

This creature was not as much of a failure as the Griffin was, though it was not great, but this picture... 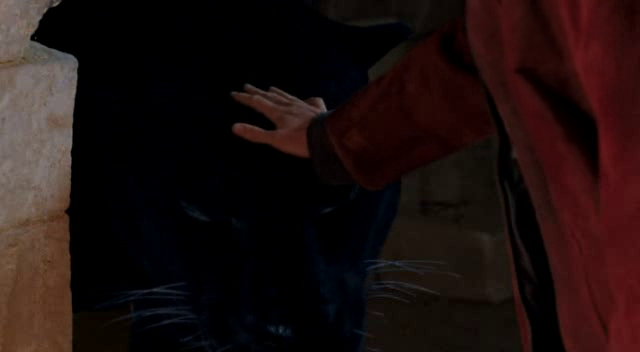 ...looked so fake. The cinema is unforgiving, this error alone ruins the entire scene. 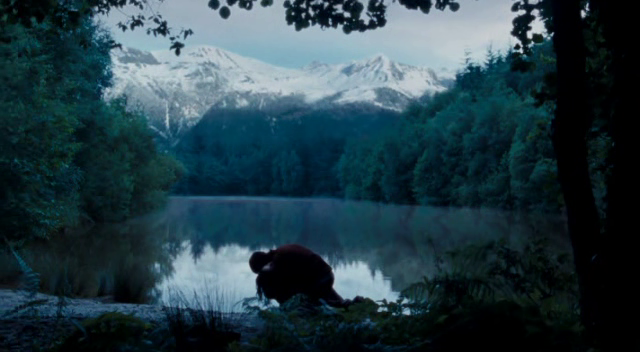 It looks like we are in a Hollywood studio in 1950. It's a shame, because the face of Colin Morgan... 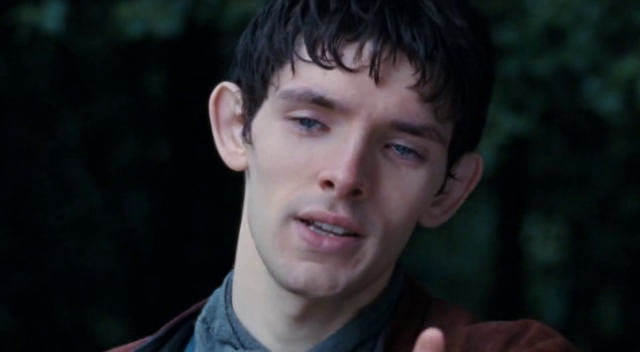 Oh! The face of Colin Morgan!

1. Tristan and Isolde. By far, the worst couple of the whole series. They came out of nowhere, then we didn't have much time to know them. I don't understand why the female characters are so mistreated in these series. Very often, they're black or white. Isolde appears as a tough woman, but in fact, she's mainly cheesy, especially when she told Gwen to never give up hope, or, worse, when she explain to Arthur why she wanted to fight at his side. It was pitiable. I never believed one second in the romance Tristan/Isolde. Thanks to the writers, we got rid of Isolde. Good riddance to bad rubbish. Unfortunatly Tristan is still on the spot. We've got already enough dumb knights, especially dumb knights who think they are intelligent. At least, we can give Percival the credit of not pretending to be smart. Besides, I don't understand why, finally, the couple chooses to fight at the side of Arthur. That was pointless. The mythical couple is a real mess !
2. Arthur and Gwen. Same all same. I don't believe in their relationship. That's happened to quickly and we don't understand why. I can bear one moment the whole kisses' stuff (The light, the music). Apparently the writers fail to give some credit to the relationships male/female. B. James assumed himself in an interview that the bromance Arthur/Merlin is far stronger than the romance Arthur/Gwen. Astonishly, the banishment's scene is heartrending and very well acted. What a shame ! The alchemy works when the lovers are to be separated !

In the first two series, she was one of the most well painted character. Some episodes has drawn very well the psychological progression of her character :

2. Gwen. In fact, for me, there is two Gwen. One I loved and one I can't bear. I loved the woman in love with Merlin, she was spontaneous and very friendly. I loved especially the way she's often completely confused ("I prefer ordinary men like you" or "anything... obviously not anything", etc.) I like her recantations : "I say that but I don't want to say that". She's always betrayed by her own words. I miss this aspect of her character, and since it has disappeared, she became empty for me, she gets me bored, the eternal good Gwen giving lessons, sermonizing and showing how much she's perfect. I'm not in a hurry to see that Gwen again.

Retrieved from "https://merlin.fandom.com/wiki/User:Knightofthecart?oldid=165699"
Community content is available under CC-BY-SA unless otherwise noted.