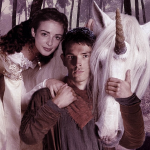 You can call me Adelina.

That's not my real name, but that's okay, I'll still know you're talking to me, and that's what matters, LOL.

Little known fact: I actually considered making my username on here "Freya-Defender" at one point, appalled with some of the hate her character unfairly gets (though I admit it's not just her; poor Gwen gets a lot of uncalled for hate as well from time to time). But I decided, instead, to use the same name I write fanfiction under.

I'm a big fan of BBC's Merlin, as I assume everyone on here pretty much is. For me, it started when I saw a few clips of the show in a Narnia fanvideo and went, "Hey, that en't Narnia! What's that from?" Then, for a while, I forgot about it. Not long after, though, I stumbled across a Hunger Games trailer redone with Merlin clips and my interest was renewed. Then I found the first episode on youtube, thought it was pretty good/interesting, and said, "Hmm, wonder what happens next... Maybe I'll watch just one more episode..." And so the trap snapped shut. LOL.

I desperately want to be a published writer, I love to read, adore books in general, and am highly anti-kindle/e-reader of any sort (if I want to read off a bloody screen, I'll blow off some hours on FF.net, and that's all there is to it, got it?).

As of late, I have fallen in love with Arthurian Legend based books (a love in part rekindled by my becoming a fan of Merlin).

Honourable mentions: Here Lies Arthur by Philip Reeve, The Mists of Avalon by Marion Bradley Zimmer, The Merlin books by Mary Stewart, and The Once and Future King by T.H. White.

On writing and favorite pairings of choiceEdit

Find me on fanfiction.net here: http://www.fanfiction.net/u/3939275/Adelina-Le-Morte-March (I'm always excited to get comments on my stories!)

My favorite Merlin pairings are:

Merlin/Freya: This is my favorite pairing. In part, because Freya is my second favorite character on the show, right after Kilgharrah, who is just too awesome (Aithusa may be super cute as a baby, but even she's no match for The Great Dragon in my opinon). I don't care how many hard-core Morgana/Merlin shippers may hate her, or that she was only in two (three, if you count her arm at the end of Diamond of the Day, which I totally do!) episodes; I think Freya's a wonderful character and a perfect match for Merlin. Plus I have a big soft spot for the Merlin/(nice) Lady of the Lake pairing in general; all the more so after hearing Heather Dale's amazing song about them!

Arthur/Gwen: They're great on the show, but I should probably admit my love for this pairing may stem from a childhood resentment towards Lancelot in the Legends. In the older legends, it was Arthur who Guinevere loved and was loyal to, then someone came up with a romance between her and Bedivere in which she was unfaithful to Arthur. Then someone made up Lancelot, the gary-stu of Camelot, in my opinon, and pushed Arthur aside, making Guinevere fall all over him instead. I HATED that, when I read about Lancelot and Guinevere in books as a child. I wanted her to love Arthur and stay loyal to him. I loved them ever since I read the story about them and the magic cap in a King Arthur picture book; I just couldn't stand the thought of that adorable couple breaking up. As a kid, I even had these little paper dolls of Guinevere and Arthur and I always kept them together -yes, yes, I know I'm weird, get over it, I am- and I kept my eyes peeled for books in which Guinevere didn't ditch him for Lancelot. So, I LOVED how in this series Arthur and Guinevere ended up happily married and the Lancelot triangle was a spell and happened during their engagment and not during their actual marriage. It did, however, utterly break my heart when Arthur died and left her alone. Sooo sad! But, as much as I hate that Gwen's all alone, I'm not a Leon/Gwen shipper. I enjoy their friendship, which is cute, but no one's been able to 'convert' me to liking them as a romantic paring. Arwen will always be better than them. Heck, in my opinon, even Merlin/Gwen is better than Leon/Gwen.

Merlin/Morgana: I know I'm probably supposed to hate this pairing, since I'm a firm Merlin/Freya shipper, but I don't actually. At least not completely. I actually really liked the thought of them together starting from as early as episode one (though the episode that really made me ship them was The Beginning of the End, seeing them take care of Mordred together). Then Freya showed up and I wasn't as hardcore Mergana after that, simply because I jumped on the Freylin ship headfirst, LOL. All the same, because Freya was dead and the writers only brought her back ONCE, I was still kinda thinking maybe he and Morgana would be good together. And then, of course, as we all knew was going to happen, Morgana became the main villian on the show, and all that negative history between them ensued. There was her trying to kill him and his master, ALL THE TIME. I still liked them for a while, but after seeing how she treated him (Merlin) in The Hollow Queen, I think I finally gave up on them as a couple. Mainly because I feel Morgana was very unthankful for everything he DID do for her. Yeah, he didn't tell her about having magic, but he TRIED to help her, and was the one who helped her find the Druids and so on... Her words in The Nightmare Begins (when she promised never to forget his help) struck me as very fake in the end because she DIDN'T remember the good things he did for her, AT ALL. And Merlin blamed himself (snort) for what she became. It's in character for him, true, but I still found it unfair. If she'd changed and became good again, like she does at the end of some of the legends, and they were able to work things out, they might have been okay together. But I do think he was still a little too good for her, though... Which is why I prefer Merlin/Freya.

Agravaine/Morgana: Don't hate me, but, yes, I confess, I ship it! I didn't used to, AT ALL, finding them creepy beyond all reason as a pairing, but then somebody just had to go and compare them to the Polar Bear and the Snow Queen in the 2002 film Snow Queen (which I love to bits!) on a forum I happened to be reading some comments on, and I realized, with extreme shock, OMG, that person is so RIGHT! They ARE like the snow queen and her polar bear! And I LOVED the snow queen and her polar bear! Now I'm stuck with the stigma of being an Agravaine/Morgana shipper. Ugh. Well, nothing I can do about it, except try to maybe sneak little Agravaine/Morgana moments into my fics from time to time in hopes of showing people that, done right and in character, the pairing doesn't HAVE to be creepy.

The Great Dragon (Kilgarrah) has been my very FAVORITE character on Merlin since episode one. My love of this dragon surpassing even my love of Freylin! It thus pains me that fans seem to feel the need to blame Kilgarrah for everything that went wrong in Merlin's life.

I support Kilgarrah. I think he was a great, wonderfully developed character. Let's give give our great dragon -who could sometimes be good, sometimes bad, sometimes neither, through the course of a wonderful show- a great big hand! You rocked Killy, and John Hurt was great as your voice; T.V. will be a much duller place without you!

Retrieved from "https://merlin.fandom.com/wiki/User:Adelina_Le_Morte_March?oldid=190595"
Community content is available under CC-BY-SA unless otherwise noted.