“I should have realised he had magic. No one can make butterflies appear from thin air.”
— Merlin on Trickler[src]

The Trickler is the jester of King Alined, by whom he's always ill-treated and threatened. He was the one responsible for enchanting Arthur Pendragon and Lady Vivian which caused them to fall in love with each other.

Trickler has magical powers and a certain aptitude for love spells. In fact, under Alined's orders, he created a love potion to make Arthur and the lady Vivian fall in love with each other. King Olaf, Vivian's over-protective father, challenged Arthur to a duel to the death, causing Camelot to be on the brink of war, just as Alined had hoped. However when Gwen kissed Arthur and the enchantment was broken, the Prince made peace with Olaf. Alined considered Trickler responsible for this and, after having chained him to his horse, made him run all the way home (Sweet Dreams).

Trickler is an extremely odd and comical character, making strange comments and slightly creepy faces while humming off key. He has a great fear of his master, King Alined, stating that he didn't want to lose his head because it was his prettiest feature. 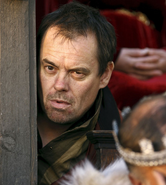 Retrieved from "https://merlin.fandom.com/wiki/Trickler?oldid=210974"
Community content is available under CC-BY-SA unless otherwise noted.