The Sword in the Stone

“All I know is that, for your many faults, you are honest and brave and truehearted, and one day you will be the greatest king this land has ever known.”
— Merlin to Arthur

The Sword in the Stone comprises the twelfth and thirteenth episodes of the fourth series of Merlin and is the two-part finale which was first broadcast on the 17th and 24 December 2011.

With Morgana at the helm of a vast Southron army, a deadly net is closing in around Camelot. When the sorceress strikes, the ferocity of her attack forces everyone to run for their lives - even Arthur. But Morgana will not let him escape that easily. And so begins a chilling hunt...

Can Merlin save the King from Morgana's clutches? Or has Arthur's luck finally run out?

Morgana and Helios have successfully captured Camelot, and Merlin and Arthur are outlaws on the run. Trapped in Ealdor with a ruthless army closing in, their situation becomes desperate. Arthur must take control before Camelot is lost forever, but faced with Agravaine's betrayal and the strength of Morgana's force, the young King has lost his conviction. Only Merlin can restore his faith, and only an extraordinary act can prove to the King that he was born to rule. Will the young warlock convince Arthur before his dreams of Albion fall to pieces?

While Arthur celebrates Beltaine in Camelot, Agravaine uses to siege tunnels under the castle with which he's able to have some of the Southron enter the citadel. Agravaine also signals to Morgana and Helios that it is finally time for the High Priestess and the warlord to attack Camelot. Morgana's army attack and burn down many parts of the kingdom while the Knights of Camelot attempt to protect the kingdom. Arthur is then alerted of the attack and he orders everyone to leave the feast while he goes into battle. Merlin, who is helping Gaius treat the wounded, decides to protect Arthur.

Arthur is wounded during the battle after killing many soldiers but Merlin arrives in time and distracts the soldiers with his magic, allowing both of them to escape. As they hide, Arthur looks out and sees Agravaine walking through the courtyard with Morgana, Helios and the army marching into the citadel, finally discovering his uncle's treachery. Enraged at Agravaine's betrayal, Arthur attempts to fight his uncle but Merlin talks him out of it as there are too many soldiers and Arthur is wounded. When Morgana finally captures Camelot, the Knights of Camelot, including Sir Leon, evacuate the citizens and escape from the kingdom while Merlin and Gaius tend to Arthur's wound. Gaius tells Merlin that they need to evacuate Arthur from the kingdom to Ealdor but since Arthur is willing to die to protect Camelot, Merlin enchants Arthur, making him confused and easily controlled. He agrees to leave the kingdom and go to Ealdor. While Merlin and Arthur leave with Percival, Gaius remains behind with Gwaine to distract Morgana, however as Morgana enters, she has Gaius and Gwaine captured and goes to hunt down Arthur. Elyan joins Arthur, Merlin and Percival as they escape the kingdom but Morgana eventually catches up to them and uses her magic to knock them over, separating Percival from Arthur, Merlin and Elyan. As Percival has disappeared, Merlin and Arthur continue while Elyan fends of Morgana's soldiers and is later captured. Merlin orders the enchanted Arthur to change his clothes and disguise into a villager as they continue their journey to Ealdor. However, along the way they are captured by some smugglers led by Tristan and Isolde but they allow the disguised Arthur (whom Merlin introduces as a 'simpleton) and Merlin to stay when Merlin tells them that they are heading for Ealdor. Meanwhile, Morgana returns to Camelot and uses a Nathair to torture Elyan who is forced to tell her that Arthur is heading for Ealdor. Morgana then tells Agravaine to go to Ealdor and capture Arthur while imprisoning Elyan with Gaius and Gwaine. During the night, Arthur, under his enchantment, tells Merlin that he finds it hard to be polite to Merlin and that he still has much to learn, to which Merlin tells him to clear their belongings. The next day, Arthur is free from Merlin's enchantment and demands to know where they are and why he is dressed as a villager. Merlin tells him that Camelot has fallen and that he had to disguise him to prevent his true identity from being revealed to Morgana's men. They come across a smuggler's caravan led by Tristan and Isolde and Arthur, when introduced to them, continues pretending to be a 'simpleton' under Merlin's supervision. However, when Agravaine catches up and ambushes them, he reveals his true identity to Tristan and Isolde. As they escape the ambush, Tristan reveals that the taxes Arthur enforced was the reason why he and Isolde had to become smugglers, making it hard for Arthur to help them. However, when Arthur saves Isolde's life , Tristan reluctantly allows Arthur to join them but only does it for Isolde who is grateful to Arthur for saving her.

As they camp, Arthur laments over Agravaine's betrayal, saying that he had been blind to his treachery as he was to Morgana's but Merlin comforts him, saying that people only hate him as they are hungry for power.

Meanwhile, in Camelot, Gwaine is forced to fight a man to get food for Gaius, who is starving, but when he wins, Morgana only gives him a piece of bread and tells him that he has to fight more men to get more food. Arthur, Merlin, Tristan and Isolde eventually arrive in Ealdor where Merlin is reunited with his mother, Hunith. Arthur is also reunited with Gwen, who has been staying in Ealdor since Arthur had her exiled for her apparent betrayal. Gwen tells Arthur that she has missed him and Arthur says that he has also missed her, and they embrace each other. Arthur later apologises to Tristan for the taxes he gave which caused him and Isolde to become smugglers as well as the loss of his cargo during Agravaine's ambush but Tristan says that he while he has lost his cargo, he still has Isolde. Agravaine later arrives in Ealdor with his men, forcing Arthur, Merlin, Gwen, Tristan and Isolde to escape while Agravaine orders his men to pursue them. 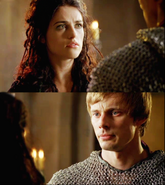 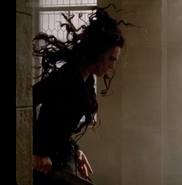 Retrieved from "https://merlin.fandom.com/wiki/The_Sword_in_the_Stone?oldid=132710"
Community content is available under CC-BY-SA unless otherwise noted.