“Without magic, I'm a nobody. People think they can kick dirt in my face.”
— Gilli to Merlin

The Sorcerer's Shadow is the eleventh episode of the third series of Merlin which was first broadcast on the 20th of November 2010.

Camelot's legendary tournament has only one rule – there are no rules.

As the mythic city fills with terrifying warriors, Gilli prepares to join the action. Despite his small stature, Gilli has victory in his sights and a secret weapon to help him – magic.

As Gilli begins to realise the full potential of his powers, Merlin is torn. Not only is his new friend putting his own life in danger but his actions also threaten to rip apart the very fabric of Camelot. Can Merlin make Gilli see sense before it's too late?

As the episode begins, a young man named Gilli is travelling to Camelot and is confronted by two thugs, Nollar and Tindr, as he walks through the forest. When Gilli explains that he is heading for Camelot to take part in the tournament, the brutish pair laugh and knock him to the ground, humiliating him. As Nollar and Tindr leave, Gilli retrieves a ring from his backpack. The ring glows with magical power, as do Gilli's eyes, revealing that he has magic. In Camelot, Arthur explains to Merlin that the knight's code means nothing at the upcoming tournament, which is open to all comers. The only rule is that there are no rules. Merlin is almost hit with a throwing axe by Nollar, who has now arrived in the kingdom with Tindr. Gilli arrives in Camelot and takes a room in the tavern, though the innkeeper demands immediate payment, since he believes that the diminutive Gilli will be killed before sunset.

As Merlin carries out his duties, Nollar begins to bully him, demanding that the servant clean his boots and striking him with his whip. Gilli arrives and demands that Nollar leave Merlin alone, using his magic ring to summon a sword and disarm the thug. Nollar departs and Merlin thanks Gilli for his help, noticing the magic ring as he shakes his hand. As they share dinner that night, Morgana discusses Uther's victories at past tournaments. Uther suggests that he might compete again, but Arthur insists that the king should not endanger his life. As Arthur leaves to prepare for the tournament, Morgana tells Uther that it would be good for the morale of the people to see their king compete. As the tournament begins, Morgana welcomes the various competitors and announces that Uther will take part, much to Arthur's surprise. The skilled king and prince both beat their first foes with ease. The vicious Nollar also competes, beheading his first opponent. Gilli's first match is against a much larger opponent and his arm is slashed by his foe's sword. However, Gilli uses his ring to give him an advantage and wins the fight. As he

1 of 3
Add photo
departs the battlefield, Gaius offers to tend his arm wound, but Gilli refuses. Gaius explains to Merlin that Gilli's ring acts as a conduit for magical powers and warns that the newcomer will be killed if Uther discovers the truth.

In a castle corridor, Gilli casts a spell while clutching his arm, creating a blinding light and a wave of scorching heat. Two guards are attracted by the light and wrestle with Gilli, who loses his ring in the scuffle. Gilli escapes the guards and examines his arm, which is now healed. However, he notices that his magic ring is now gone. Uther later examines the scorch marks that Gilli's spell has left on a wooden door. He explains to Gaius that the guards did not get a good look at the sorcerer due to poor light, and, while the king is distracted, Gaius scoops up Gilli's ring from the floor. When Uther departs, Gaius explains to Merlin that Gilli must have used a cauterising spell on his wound. He implores Merlin to speak to Gilli before it is too late.

Merlin visits Gilli at the tavern and admits that he knows about the newcomer's use of magic. Gilli denies it, but Merlin returns the ring to him. Gilli confesses that his father left him the ring, but never used it himself, since he was frightened of magic. Merlin insists that Gilli must withdraw from the tournament, but the young sorcerer claims that he is "a nobody" without magic. Merlin warns him that he will be killed if caught by Uther. In the tournament quarter final, Uther and Arthur each defeat their opponent, meaning that the father and son must face off in the next stage. Meanwhile, Gilli's next opponent is Nollar. As the thug backs Gilli into a corner, his partner Tindr grabs hold of him. Gilli uses magic to propel Nollar backwards and head-butts Tindr. As Nollar crawls on the floor, Gilli runs him through with his sword. The crowds cheer, but Gilli is clearly shaken by his actions.

Later, Gilli admits to Merlin that he just wanted respect, but that he is not a killer. He agrees to withdraw from the tournament. However, as Gilli returns to the tavern, he is cheered and applauded by the people and clearly enjoys the adulation. Meanwhile, a troubled Arthur admits to Merlin that if he fights Uther with his full strength, he could defeat and humiliate the king, and even accidentally wound or kill him. Merlin suggests that Arthur will have to let Uther win the match, but the prince cannot stand the thought of his father's gloating. The following day, the pair face off. As the match begins, Arthur clearly has the upper hand against his father. However, realising that Uther is frustrated and embarrassed, Arthur willingly throws the fight and allows the king to win.

With Uther through to the final, Gaius points out that his next opponent could be Gilli, who is still in the competition, much to Merlin's shock. Gilli once again secretly uses his ring to overcome his opponent, badly wounding him. An angry Merlin visits Gilli at the tavern and orders him to withdraw. Merlin conjures a flame in his hand, revealing his magical skills to Gilli. He admits that he understand how hard it is "to be special and pretend you're a fool". However, Gilli argues that Merlin has been pretending for so long that he has forgotten his magical heritage. He claims that someone with magic needs to strike a blow against the tyrannical Uther. Later that night, Merlin summons the dragon Kilgharrah, desperate to discuss his quandary with a creature of magic. Though Kilgharrah reminds the boy wizard that he previously ignored his advice and overruled him, he agrees to help. When Merlin explains the situation with Gilli, Kilgharrah suggests that Arthur's heart will be hardened against magic if he sees his father killed by a sorcerer. Kilgharrah suggests that Merlin must let Gilli die.

In the final battle of the tournament, Gilli and Uther face off. When Gilli uses his ring to compete against the king, he overpowers Uther, but Merlin covertly uses his own magic to thwart his fellow sorcerer. Unwittingly aided by Merlin, Uther is eventually able to overcome Gilli, knocking him to the ground. Uther is crowned champion and Gilli leaves the stadium defeated. Merlin attempts to apologise, but a disheartened Gilli ignores him. As he packs to leave Camelot, Gilli accuses the visiting Merlin of betraying his kind.

However, Merlin asserts that it is Gilli who is the traitor, since he acted dishonourably and used magic for his own glory. Gilli admits that he was wrong about his own father, realising that he was not afraid of magic itself, but the power it has to corrupt the weak. Gilli apologises for his actions and Merlin promises that on the day that magic is permitted once again in Camelot, they will reunite. The pair reconcile and Gilli peacefully departs the kingdom.

That night at dinner, Uther boasts about his victory over Gilli. However, when Morgana taunts Arthur about losing the fight against his father, to their surprise (Arthur even nearly chokes on his food) Uther casually reveals that he is completely aware that his son threw the fight to save him embarrassment. The king thanks Arthur, proclaiming that his honourable actions have proven that he is now truly ready to become king. As the episode concludes, Gaius presents Merlin with a special dinner, insisting that he is proud of his ward. When Merlin modestly claims that he does not deserve such treatment, Gaius snatches up the dinner and begins ravenously eating. Merlin is even more shocked when Gaius swats his hand for reaching for the plate, but the cheeky physician produces a second meal for him. Gaius chuckles as the pair tuck into their food.

Merlin reveals his powers to Gilli 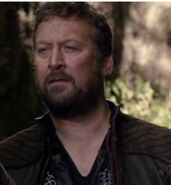 Merlin tells Gilli that they will meet again

Poster for the episode

Gilli uses his magic to take down his opponents.

Rate this episode!
Retrieved from "https://merlin.fandom.com/wiki/The_Sorcerer%27s_Shadow?oldid=179391"
Community content is available under CC-BY-SA unless otherwise noted.