The Secret Sharer is the seventh episode of the fourth series of Merlin which was first broadcast on the 12th of November 2011.

Morgana joins forces with the enigmatic wizard Alator of the Catha in an attempt to uncover a secret to change the course of destiny, as the magical drama continues. With allies on both sides of the castle walls, can anyone stop her before Merlin's secret is revealed?

Morgana is recovering inside her hut from her duel with the disguised Merlin who she knows as Emrys, where Agravaine brought her while she was unconscious. After telling Agravaine Emrys attacked her and he destroyed the Fomorroh, Agravaine tells Morgana someone has been telling Emrys everything about them. Agravaine suspects Gaius as he was the only one in Camelot who knew of the Fomorroh. Determined to learn who Emrys is, Morgana searches for Alator of the Catha, a priest and warrior.

In the meantime, Agravaine persuades Arthur that Gaius is the traitor. Taking Agravaine's advice, Arthur and his uncle question Gaius and his views of magic but when Gaius tells them nothing, they let him go. Morgana finds Alator and asks him to abduct Gaius in exchange for her healing bracelet. Alator accepts and abducts Gaius from his chambers with the help of Agravaine.  Agravaine plants evidence of Gaius' supposed betrayal in Gaius' room to prove to Arthur he had been correct in suspecting Gaius' motives.

In the morning, Agravaine tells Arthur Gaius was last seen running away and many of his possessions are gone. Merlin immediately suspects Agravaine and informs Arthur of his suspicions, however Arthur refuses to listen.

Alator and Morgana question Gaius as to Emrys' true identity. Merlin later finds evidence in Agravaine's chambers as to where Gaius is, so he and Gwaine ride out to rescue Gaius. Agravaine rides out and warns Morgana moments before of Merlin's suspicions. Morgana and Agravaine arrive and Morgana tells Agravaine to kill Gaius while she deals with Merlin and Gwaine. After Alator mentally tortures Gaius with a magical ring of fire, Gaius tells Alator that Merlin is Emrys, the most powerful sorcerer destined to unite the old and new ways together.

Gwaine finds Agravaine about to kill Gaius, however Agravaine lies and says he was saving him and the two hurry back to Camelot with the unconscious Gaius. Morgana soon finds Merlin and is about to kill him when Alator arrives. Alator tells Morgana he knows who Emrys is and where Emrys is making Morgana believes Alator is about to tell her the identity and whereabouts of Emrys. However, Alator says he has no intention of giving away this information, responding to Morgana's command to divulge the information by saying "never".

Alator aims his staff at Morgana and uses a stunning spell to knock her unconscious. Alator kneels and introduces himself to Merlin, telling him he understands his burden of keeping his magic secret and fulfilling his destiny. He says he and other sorcerers are willing to give their lives to help him.

After Merlin, Gwaine and Agravaine return to Camelot with Gaius, Agravaine tells Arthur he misjudged Gaius and  they owe both Gaius and Merlin an apology for suspecting them. As Gaius is recovering, Merlin tells him Morgana did not learn he is Emrys and Alator turned against her to protect his secret. Arthur arrives and apologises to Gaius in private after apologising to Merlin in his own way by making him resume his duties. Gaius tells Arthur that Morgana wanted information from him but did not get it, before telling Arthur the sorcerer (who was Merlin disguising himself as Emrys), who he thought had killed Uther, did not actually kill him and did his best to save him, reassuring Arthur one day he will learn the truth on how other people care about him. 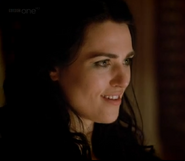 Retrieved from "https://merlin.fandom.com/wiki/The_Secret_Sharer?oldid=213377"
Community content is available under CC-BY-SA unless otherwise noted.