“He saved my life, I can't just stand by and watch him die!”
— Arthur to Uther

The Poisoned Chalice is the fourth episode of the first series of Merlin, which was first broadcast on 11 October 2008. It is a follow-on of the previous episode in which Nimueh attempts to enact her revenge on Merlin.

Posing as a servant girl, the sorceress Nimueh enters Camelot seeking revenge on Merlin with a plot to poison him. Meanwhile, Bayard and the Knights of Mercia are welcomed to Camelot to celebrate the union between the two kingdoms. Unaware of Nimueh's true identity, Merlin saves Arthur from drinking from a poisoned chalice by drinking the potion himself, which puts him in a deep coma. Gaius discovers the origin of the poison and needs to make an antidote to save Merlin. Arthur disobeys Uther's commands and sets off on a quest to save Merlin. He ventures deep into the Forests of Balor to find an antidote, but little does he know he's walking into a trap...

Bayard, the king of Mercia, comes to Camelot to sign a peace treaty between the two kingdoms. Nimueh, posing as a Mercian handmaiden named Cara, purposely bumps into Merlin and flirts with him to gain his trust. Later when Bayard passes the two ceremonial goblets (one for Uther and one for Arthur), Nimueh takes Merlin to one side and tells him that she witnessed Bayard poisoning Arthur's goblet. He rushes in on the ceremony to warn Arthur, but is forced to drink from the goblet himself - if he lives, he will be turned over to Bayard to use as he wishes. However, prior to coming to Camelot, Nimueh had poisoned and cast a spell on the chalice. Shortly after Merlin drinks the contents of the goblet, he begins to gasp, and then he collapses.

With Merlin dying, Nimueh returns to her domain and Uther, believing Bayard was trying to assassinate Arthur, throws him and the other Mercians into the dungeons. Gaius, Gwen and Arthur carry Merlin to Gaius's chambers where Gaius discovers a poisonous flower petal stuck inside the chalice. He explains to Arthur that an antidote can only be made from the leaves from the same flower, the Mortaeus flower, which may only be found in the caves beyond the Forests of Balor. He also explains that it would be a dangerous journey. Arthur hesitates and then asks what would happen to Merlin if he didn't get the flower. Gauis then answers that Merlin would have three or four days to live, but he would die eventually. Arthur decides to go find the antidote, but Uther forbids it, saying that Arthur's life is more important than Merlin's.

Morgana, however, is able to reassure Arthur to go, saying Camelot would rather have a king who would risk his life to save a servant than one who did everything his father told him to. While Arthur is gone, Gaius and Gwen notice the poison's effect is progressing rapidly. Merlin, still unconcious, is getting paler and having difficulty breathing. The poison will kill Merlin sooner than Gaius originally thought. Through his research, Gaius discovers the poison is more potent when magic is used to prepare it, and quickly realises that Nimueh was behind it.

In the forest where the cave is located, Arthur finds Nimueh disguised as a maiden, claiming to have run away from her abusive master. After fighting and defeating a Cockatrice, Nimueh tells him she knows where the flowers are found and leads him to them. While in the cave she casts another spell causing the ledge Arthur is standing on to collapse. She leaves him clinging to the edge of cave to die, telling Arthur that it isn't his destiny to die at her hand.

Meanwhile Merlin, under the influence of the poison, begins to mutter out things about Arthur and say magical words that Gwen doesn't recognise. Gaius sends her for more water to keep temperature fever down. Merlin appears to be aware that Arthur is trapped in the dark, suggesting he is either subconsciously using magic or has some kind of link with Arthur, and creates a sphere of ethereal light in his palm. It then appears beside Arthur, trying to lead him the way out of the cave. Arthur is soon attacked by many more spiders, but manages to reach across to pick the leaves of the flower needed to make the antidote that will cure Merlin, and then clambers up the wall to the exit of the cave, guided by Merlin's light.

However, once Arthur returns to Camelot with the flowers, he is immediately arrested and taken to the dungeons for disobeying Uther. He begs his father to take the flower to Gaius, but Uther, wanting to teach Arthur a lesson in obedience, crumples the flower and drops it outside the cell, saying he can find a new servant when he is released. Arthur watches in horror, and yells at his father as he leaves the room. Arthur reaches through the bars to get it back.

Gwen poses as a servant bringing Arthur's food in order to see if he has the flower. Arthur manages to secretly give her the flower, and Gwen returns to Gaius. In order to make the antidote work, Gaius secretly uses magic for the first time in the series, despite it being forbidden. Gaius quickly gives the potion to Merlin. For a moment, Merlin stops breathing and his heart stops. Gaius and Gwen assume that he is dead and have a moment of deep sadness. Gaius hugs Gwen to comfort her. Then the two hear Merlin voice say, "That is disgusting! You should be ashamed of yourself, you're old enough to be her grandfather!". They turn to see a fully conscious Merlin. Upon realising Merlin is alive, Gwen kisses him in happiness. Gwen apologises for her behaviour, to which Merlin replies "It's fine. It's more than fine." He claims not to remember anything since he drank from the goblet.

News of Bayard's arrest reaches Mercia, and an army is soon sent to Camelot to free him. While Uther is preparing for the attack, Gaius reveals to him that the poison was magical and that Nimueh must have been behind it. Upon realising Bayard had been framed, Uther releases him from his dungeons and a potential war between Camelot and Mercia is averted. Uther then reveals to Arthur that the woman he met was Nimueh, and emphasises how he believes all magic to be corrupt.

Bayard is allowed to go free, and Arthur goes to Gaius and Merlin's chambers to make sure he is alright. After he has left, Merlin asks Gaius why Nimueh had gone to all the trouble of framing Bayard for trying to poison Arthur instead of just letting him just drink the poison and die. Gaius tells Merlin that it was Merlin himself that Nimueh wanted to kill, not Arthur, saying "it seems that someone else knows you're destined for great things." 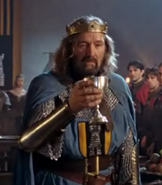 Rate this episode!
Retrieved from "https://merlin.fandom.com/wiki/The_Poisoned_Chalice?oldid=213699"
Community content is available under CC-BY-SA unless otherwise noted.