“I'd be happy if he died tomorrow.”
— Gwen to Sarrum about Arthur.[src]

The Hollow Queen is the eighth episode of the fifth series of Merlin.

When Merlin agrees to help a young Druid boy, Daegal, he has no choice but to leave Camelot on a dangerous mission. With the citadel distracted by the visit of the fearsome Sarrum of Amata, it seems that no one will notice his absence.

But as the sky darkens, so do Merlin's suspicions - is there more to Daegal than meets the eye? And can a man as ruthless as the Sarrum ever really be trusted? Before long, the young warlock realises he has made a terrible mistake.[1]

A cloaked figure scales the walls of Camelot, scraping his arm as he does so. As he walks through Camelot, a group of knights escorting Queen Guinevere comes across him. Sir Leon orders the figure to show himself; he does so, pulling down his hood to reveal the face of a boy. He tells them that he has been out catching frogs, and Guinevere insists that the knights let him go home.

Guinevere arrives at the chambers she shares with King Arthur. Arthur and Merlin—mostly Merlin—are in the process of decking it out in flowers and rose petals. Guinevere acknowledges the fact that Arthur thought of it and he suggests that Merlin leaves prior to picking her up and escorting her to bed so that they may do the horizontal hokey pokey. She asks Merlin to draw her a bath.

Merlin goes to prepare the water. The boy approaches him, introducing himself as Daegal and revealing a Druidic tattoo. He asks for Merlin's help in healing his fatally ill sister, who is in the Valley of the Fallen Kings. Merlin initially refuses because the trip is more than half a day, but when Daegal presses him, Merlin agrees to meet him at the entrance to the Darkling Woods at dawn tomorrow.

The next morning, Gaius attempts to dissuade Merlin. Merlin refuses to change his mind, saying that he cannot just let this girl die. Promising to be back by nightfall, Merlin leaves to meet Daegal.

Merlin finds Daegal waiting for him. As they leave, Merlin gives Daegal some bread to eat for breakfast. Daegal confesses he thought Merlin wasn't going to come and asks if Merlin will get in trouble for ditching Arthur; Merlin responds that Arthur will be so busy with the preparations for the Sarrum's arrival, he won't even notice Merlin's absence.

Back in Camelot, Arthur shouts for Merlin as he digs through a drawer. Guinevere enters and immediately finds the comb Arthur was searching for. Guinevere reminds him to get ready for the Sarrum. Realizing he doesn't know where his robes are, Arthur goes to Gaius's rooms to find Merlin. Gaius tells Arthur that Merlin is out gathering herbs, and will be unavailable for the day. Sensing the lie, Arthur orders Gaius to sober Merlin up when he gets back from the tavern.

Merlin and Daegal travel through the woods. Noticing Daegal's arm wound, Merlin cares for it. Daegal is astonished by Merlin's proficiency, but Merlin waves it off, crediting Gaius. He asks after Daegal's family and learns that Daegal is an orphan. Merlin asks if Daegal's mother was a Druid as well, and Daegal nods. They continue on their way.

Meanwhile, Arthur is struggling with his clothes. When Gaius enters without Merlin, Arthur insists that Gaius help him get dressed. However, Gaius accidentally puts Guinevere's nightdress on Arthur instead, ripping it in the process.

As they travel through the woods, Merlin tosses Daegal another apple, telling him to eat. Daegal questions Merlin, saying that people don't care, and he can't understand why Merlin can care for Daegal, who doesn't matter to anyone. Merlin tells Daegal to never think himself worthless, and the two go on.

Guinevere sneaks out of the castle and leaves something at the roots of a tree. Arthur is in his chambers with Gaius, finally dressed. They discuss the Sarrum, who has a reputation for sadistic cruelty. However, Arthur needs the Sarrum's help in order to achieve peace throughout the five kingdoms; that, and the rumors that the Sarrum had once captured Morgana, drive Arthur to seek an alliance with such a horrible man.

Merlin and Daegal continue to traipse through the forest. Daegal returns an apple to Merlin, claiming he doesn't want it. They continue on but Merlin notices some bandits creeping nearby. He calls out telepathically to Daegal, but Daegal continues on, about to walk right into the bandits' eyesight. Merlin lunges and grabs Daegal, dragging him into hiding just as the bandits pass by. Daegal thanks Merlin for saving his life, but Merlin says he's not safe yet: the sooner they reach Daegal's sister, the better.

In Camelot, Arthur and his knights have assembled to welcome the Sarrum. The Sarrum remarks that the last time he saw Arthur, Arthur was only a little boy, and Uther held a tournament in his honor. Arthur responds that he fights his own battles now, and the Sarrum laughs, saying they will have to put Arthur to the test.

Merlin and Daegal reach the Valley of the Fallen Kings, but there is no sister for Merlin to tend to. Merlin reveals that Daegal is not a Druid and he demands to know why Daegal has brought Merlin here. Morgana appears and blasts Merlin with magic. Morgana tosses Daegal a pouch of coins and, declaring that Merlin has meddled in her plans too often, she gives Merlin a lethal, agonizing dose of poison.

Arthur and Guinevere dine with Sarrum. Arthur asks him about Morgana, and the Sarrum explains that he took Aithusa hostage, forcing Morgana to cooperate for Aithusa's sake. He kept them in a well, but it was too small for Aithusa, who as she grew over the course of two years slowly became crippled. Unable to listen further, Guinevere leaves. She goes to meet Morgana, and the two plot to use the Sarrum to assassinate Arthur. Afterwards, they will kill the Sarrum, and Guinevere promises Morgana that the Sarrum's last moments would be filled with agony.

Merlin is dealing with the agonizing poison Morgana gave him. He coughs up foam and bleeds black blood from sores. His attempts at magic fail, and he passes into unconsciousness.

The next morning, Arthur duels against the Sarrum's best warrior and loses. After the Sarrum leaves the training grounds, Guinevere approaches him and tells him that he should have ordered his warrior to kill Arthur. The two agree to meet later and plot Arthur's death.

Merlin continues to suffer terribly. Daegal returns and shakes him awake, giving him water. He begs Merlin to tell him how to heal him. Merlin tells him to gather some herbs and grind them into a tincture, quickly. Daegal does so and administers the antidote to Merlin, but Merlin convulses and then goes limp.

That evening, Gaius goes to find Arthur but finds Guinevere instead. He tells her that Merlin has not yet returned. He asks that a patrol be sent to search for Merlin, but Guinevere refuses, saying that they need to keep all their men here in case the Sarrum tries to pull something.

Late that night, Merlin wakes. Daegal tells him he did not know Morgana was going to kill Merlin. Merlin asks what Morgana's plan is, but Daegal doesn't know anything except that she intends to kill Arthur. Merlin and Daegal head back to Camelot to warn Arthur, but they encounter bandits. Merlin tells Daegal to run but Daegal refuses, tossing the bandits the money Morgana gave him. When the bandits don't leave, Merlin attacks the leader with magic. The bandits quickly retreat.

The next day, Guinevere passes a key to the Sarrum. The key is to a door leading to a balcony over the room where Arthur and the Sarrum will be signing a treaty. The Sarrum gives it to the warrior who had bested Arthur and tells him that once Arthur is dead, they need only kill the queen and then Camelot is in their hands.

As Merlin and Daegal rush to Camelot, Daegal asks Merlin about his secret magic. Merlin admits that Arthur does not know about his magic, but will someday create the world Merlin has been dreaming of. Daegal asks to help him, telling him that though Merlin is a warlock, he needs help.

Gaius brings his concerns about Merlin to Arthur, but Guinevere interferes, claiming that Merlin has gone to visit a girl. Arthur, incredulous that Merlin has a girlfriend but relieved he is in no danger, decides to go through with preparing to sign the treaty.

In the woods, Daegal bandages Merlin's leg. Merlin says that Daegal has done well. Daegal is surprised, commenting that he has not done any good things in his life. Merlin, examining the bandages on his leg, says that Daegal must have the physician's "gift." Daegal says it's from his mother, and that everything he told Merlin, other than making up a sister, was true. His mother had had magic, but hadn't been a Druid.

Merlin and Daegal reach Camelot. As they search for Arthur, Merlin notices the unlocked door; the pair climbs the stairs and interrupts the assassin, who is aiming a crossbow at Arthur. The man lets fly some arrows at Merlin and Daegal, which Merlin deflects. The man begins to throw knives at them, but Merlin's leg gives out and he trips as he dodges. Merlin uses his magic to hurl an arrow at the assassin, throwing off his aim and causing an arrow to hit Sarrum instead of Arthur.

Merlin looks back and sees that one of the assassin's knives is embedded in Daegal's chest. Merlin stays by his side as Daegal dies, having finally done something good in his life.

That night, Merlin served dinner for Arthur and Guinevere. Arthur asks Merlin about his girl, saying that Guinevere told him that Merlin was seeing someone. Merlin looks at Guinevere, who merely smiles.

Merlin and Gaius bury Daegal. As they walk away from his grave, the two decide they need to do something about Guinevere. 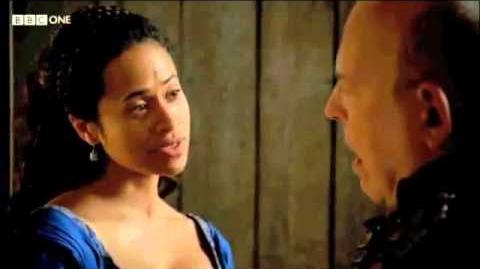 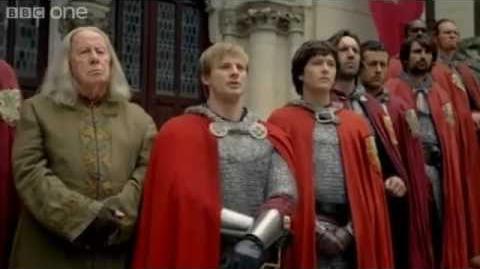 Previous Story: A Lesson in Vengeance | Following Story: With All My Heart