“When the Fires of Idirsholas burn, the Knights of Medhir will ride again.”
— Gaius

The Fires of Idirsholas is the twelfth episode of the second series of Merlin which was broadcast on 12 December 2009. This sees the second appearance of Morgause, the departure of Morgana and the release of the Great Dragon.

When the fires of Idirsholas burn for the first time in 300 years, Gaius fears a sorcerer has revived the deadly Knights of Medhir. Morgause returns, hell-bent on ending Uther's reign, with Morgana on her side, they are almost unstopable....

Inside the ruined castle of Idirsholas, Morgause performs a magical ritual in the presence of seven motionless figures clad in black. Upon the completion of the ritual, a fire erupts in the centre of the room, animating the figures. In Camelot, Uther is brought word by a farmer that smoke was seen to be rising from the citadel of Idirsholas. Worried, Gaius warns Uther that the old legend says that the Knights of Medhir would ride again if the fires of Idirsholas burn. Arthur orders men out to the site to investigate, despite the prince's sceptical nature.

Gaius reveals to Merlin that 300 years ago, seven of Camelot's finest knights were seduced by the sorceress Medhir. The knights became a force to be reckoned with as they swore to serve Medhir, destroying everything in their path. The knights were only stopped when Medhir was killed, as without her magic, they became lifeless. When Arthur , Merlin and a group of soldiers arrive at Idirsholas, they are ambushed by the knights and it is only with the secret use of Merlin 's magic that he and Arthur survive. Merlin 's arm is cut by something in the battle and Arthur insists on using his shirt to bandage the cut despite Merlin's complaining. They decide to return to Camelot to regroup and devise another attack.

Meanwhile, Morgause contacts her half-sister Morgana and they meet in secret. Their common hate for Uther strengthens Morgana's conviction that he must be defeated. She thus agrees to help Morgause, but still unsure of Morgause's true plan and intention. When Morgana awakes, she finds that the people around her are coming down with a strange sickness which renders them weak and tired and causes them to eventually fall into  sleep. When Arthur and Merlin return, they are horrified to find everybody in a state of unbreakable slumber. Working their way through the castle, Arthur and Merlin struggle to understand the enchantment cast over Camelot. After placing a sleeping Gwen on Morgana's bed, Arthur almost injures a hiding Morgana, believing her to be an enemy. Suspicions about Morgana's health in the wake of the enchantment arise, though Merlin is successfully able to deflect such suspicions by saying that Morgana took a potion before Gaius became ill, hence her health. They then rush to find and keep Uther hidden, fearing that he would be sought after by the intruders(Morgause and the Knights of Medhir). The situation worsens as Arthur and Merlin both begin to succumb to the sickness. Merlin volunteers to 'search' for the potion that Morgana took.

While Merlin searches for the potion, he encounters and eludes a Knight before seeking out the Great Dragon's help. Merlin is initially denied assistance, the Dragon only agreeing to help when Merlin makes a promise of his mother's grave that he will release him. The Dragon says that the only way the spell over Camelot will be broken is if Merlin kills the source of the magic, Morgana. Troubled by the task set to him, Merlin hesitantly takes a bottle of hemlock from Gaius' quarters and returns to Morgana and Arthur, who are attempting to transfer a sleeping Uther to a cart outside the castle. They are ambushed by the Knights however, and Arthur takes it upon himself to delay them from getting near his father.

While he does so, Morgana stumbles and falls at the feet of a Knight. Merlin ignores her pleas for help and Morgana is almost killed but the Knight surprisingly stops as if he recognises his victim. He pursues Merlin instead, but is defeated by Arthur. Morgana, Arthur, Merlin and a sleeping Uther are forced into the throne room where Arthur plans to fight the Knights on his own while Morgana and Merlin lower Uther into the cart. While Arthur fights, Merlin secretly poisons the water he offers to Morgana. After initial refusals, Morgana eventually accepts the water and begins to choke. Merlin apologises as Morgana succumbs to the poison.

Hearing her sister's cries telepathically, Morgause rushes to her aid, accusing Merlin of murder. She demands to know what poison Merlin has used, but Merlin replies that Morgause will only gain such information when she stops the attack. Morgause threatens to kill Merlin, but after realising Morgana will die as well, she relents and halts the attack. Surrounded by Arthur and the reawoken Uther and knights of Camelot, Morgause uses magic to escape with Morgana. Uther thanks Arthur, but admits that Morgana's abduction hangs over his head. He remarks that Morgause must not be allowed to get away with what she has done. In Gaius' quarters, it is obvious that Merlin is still troubled by his actions. Gaius attempts to comfort him by saying that although they both cared for Morgana, she chose to use her gifts for evil. Merlin reluctantly agrees and leaves, saying he needs to do something.

After taking a sword from a Knight, an artefact of the Old Religion, Merlin returns to the Great Dragon. He asks what the Dragon's intentions are once released, but the Dragon cryptically replies that there is only one road he can take. Merlin asks the Dragon to promise to not harm Camelot, but the Dragon simply replies that he believes enough bargains have been made. Merlin wields the sword and frees the Dragon, who roars in triumph and escapes to freedom ready to attack Camelot.

The Castle of Idirsholas

According to the legend there were only seven Knights of Medhir'

Morgana reads the note from Morgause 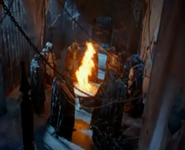 Rate this episode!
Retrieved from "https://merlin.fandom.com/wiki/The_Fires_of_Idirsholas?oldid=172492"
Community content is available under CC-BY-SA unless otherwise noted.