“I want an end to my suffering, for the arrival of a new time, the time of the once and future king.”
— Fisher King to Merlin

The Eye of the Phoenix is the eighth episode of the third series of Merlin which was first broadcast on the 30th of October 2010.

Arthur embarks on a solitary quest to retrieve the Golden Trident from the Fisher King and prove himself worthy of the throne of Camelot, as the fantasy drama continues.

Beyond the protection of the citadel, Morgana sees an opportunity to use her dark magic and gives him a precious bracelet containing a Phoenix Eye. She insists he wears it at all times for protection but instead it saps him of his life force and he is left defenseless in the Fisher King's perilous realm.

With the help of Gwaine, an old ally, can Merlin reach him in time and fulfil his own quest to protect the future king of Camelot?

Merlin dresses Arthur in a white ceremonial cloak before Arthur then enters the main hall by moonlight. He kneels before the throne, and closes his eyes, while Merlin watches through a crack in the door. He explains to passing Gwen that Arthur is transcending his body so that a quest is revealed to him in a vision. The quest he chooses will then prove whether he is worthy to be king. Merlin falls asleep from watching him all night, and when he is abruptly woken,  Arthur informs the court of the quest that he has chosen: He is to enter the realm of the Fisher King and bring back his Golden Trident, alone and unaided.

Later, while eating dinner, Gaius explains to Merlin who the Fisher King was. He was a sorcerer who was wounded in battle. The wound became infected, and the infection spread not only through him, but his kingdom as well. As a result, the kingdom became a wasteland (renamed 'The Perilous Lands ' by northerners), and still is. There were legends that the Fisher King was kept from death by his magic, and still inhabits his castle. Few who visited the lands have returned.

Morgana is later met in the town by Morgause (in disguise as an old beggar woman), and tells her of Arthur's chosen quest. Morgause then gives her a a bracelet and give it to the prince just before he leaves. The gift will cause Arthur to die, and Morgana will take her place as heir to the throne. As Morgause leaves, her true face is seen in a mirror by Gwen, who is confused at Morgana's well being having met her former kidnapper.

As Arthur leaves, he kisses Gwen goodbye, and Uther expresses his worries to Morgana. Merlin learns of Arthur's gift from her, and senses magic. Gaius and Merlin then discover it's a phoenix eye. Phoenix eyes absorb the life force of anything they come in contact with. If worn for too long, the wearer will die. Merlin then gallops out of Camelot to help Arthur, and to fetch a friend along the way.

That night, Morgana performs an enchantment, and Arthur's bracelet begins to glow. Gwen interrupts Morgana's ritual, and is confused by her curt manner. The next morning, Arthur fights off bandits with much less energy and skill than he usually does. Merlin enters a tavern, and greets a dishevelled Gwaine. The pair then run from a group demanding money, while Merlin explains Arthur's predicament. They steal a pair of horses and ride for the perilous lands.

Arthur continues on his journey and arrives at a bridge. There he is met by Grettir, 'keeper of the bridge'. Grettir names him Courage, and informs him he will need 'magic' and 'strength' if he is to complete his quest. Grettir, having spotted the bracelet, pokes fun at  it. He senses the magic of the bracelet.

Back in Camelot, Morgana gives Gwen a day off, under the cover of an apology for shouting at her the other night. She later returns and fetches the materials she needs for the enchantment, and performs it. Unknown to her, she is being watched by Gwen. Gwen, horrified, rushes to Gaius's chambers to informs him of what she had seen. She tells Gaius that Morgana is using magic, and that she has changed a lot, adding that she intends no good for any of them. Gwen becomes the third ally of Camelot to learn of Morgana's true loyalties. Meanwhile, Arthur is ever closer to the castle of the Fisher King, but faints while trekking through a swamp.

Merlin then appears at the bridge, and is called Magic by Grettir, who informs him that he only intends to see the Fisher King's land restored. Gwaine then appears, and is called Strength by Grettir, who announces that the trio is complete. Both of them then continue on their journey. Arthur approaches the castle, closely followed by Gwaine and Merlin. Despite being attacked by wyverns(distant cousins of the dragons), the three men enter the castle safely. Gwaine and Merlin split up to search for Arthur, who collapses with the wyverns about to break through the door. However, Merlin arrives just in time and commands wyverns with his dragonlord powers, and later Gwaine stabs another wyvern with his sword. Merlin then removes the bracelet and Arthur wakes up. Though enraged at first that his vow to do the quest on his own is broken, he allows his friends to help him search.

The friends spot the throne room, and as Merlin begins to enter, he sets a trap and the door closes shut behind him with Merlin trapped inside and the other two outside. Initially unbeknownst to the presence of the king, he is then greeted by the old and weary Fisher King.  The Fisher King explains to Merlin that Albion's time of need is near and he'd need all the help he can get to save her. And thus, the King gives Merlin a vial with water, from the Lake of Avalon, and tells him that it'll be of aid in the dark times ahead.Merlin then realises why  he and Arthur were brought here. The King asks Merlin for a gift in return and tells him that he wants an end to his suffering. Merlin gives the king the eye of the phoenix and with the last of his strength, the Fisher King dies, upon wearing the bracelet.  Soon, Gwain & Arthur enter the throne room and Arthur finds the trident, looking pleased.

The trio then return to Camelot but Gwaine had been sent to exile by King Uther some time back. So, he stops at the border. But Arthur thanks him and tells him that his help will not be forgotten. Arthur then presents the court with the trident and Uther tells him that he has proven himself worthy of the throne, unaware of the fact that Merlin had been with Arthur. Later on, Merlin shows Gaius the vial Fisher King had given him. Gaius realises it's significance and puts forth his concerns on Morgana and her intentions. The episode ends with Merlin staring at the vial. 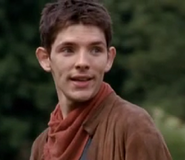 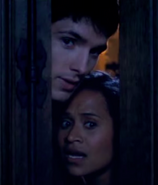 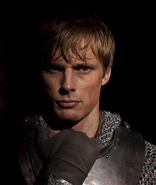 Previous story: The Castle of Fyrien | Following story: Love in the Time of Dragons

Rate this episode!
Retrieved from "https://merlin.fandom.com/wiki/The_Eye_of_the_Phoenix?oldid=174982"
Community content is available under CC-BY-SA unless otherwise noted.