“I have his true name. It is Merlin.”
— A vengeful Mordred reveals Emrys' identity to Morgana Pendragon.

The Drawing of the Dark is the eleventh episode of the fifth series of Merlin. It marks Mordred's return to the dark side and the first and last appearance of Kara, Mordred's old love.

Mordred finds himself torn between loyalty and love, but little does he realise that the path he chooses will shape Camelot's destiny.

As the drums of war beat ever louder, a desperate Merlin feels trapped by the cruel circle of fate - is he powerless to stop his dreams of Albion from crumbling to dust?

Merlin, Arthur, and the knights are patrolling the woods, when they find a dead Camelot patrol and a wrecked cart: Arthur remarks it is the work of Saxons. Suddenly, Mordred sees a cloaked figure fleeing from the scene, and gives chase. The figure trips over a branch, revealing herself to be a young woman whom Mordred recognizes. He orders her to run, calling her Kara, and then lies to Arthur and the knights, claiming it was just a deer. Merlin, however, saw the cloaked figure and believes it was a Saxon. His distrust for Mordred grows.

Back in Camelot, Merlin tells Gaius that he is still worried about Mordred and his true intentions. Gaius advises him that the Druid boy means no harm and they both leave the chamber to attend to a patient. After they leave, Mordred sneaks into Gaius' chambers and steals some healing potions. Late that night,  he sneaks back into the forest and finds Kara, using potions to treat her wounded leg. It is revealed that they have known each other for years, and are deeply in love with each other. When Mordred returns, Merlin questions him as to where he has been, and he tells him the truth. Mordred makes him promise not to betray him and tell Arthur. Later on, Merlin and Arthur patrol the forest, stumbling across Mordred's footprints which lead them to Kara. Kara then attempts to kill Arthur, but Merlin deflects the dagger using his magic. Kara is arrested and taken to Camelot, where she admits in her trial that she killed the Camelot patrol and wishes she had succeeded in killing Arthur. He sentences her to death by gallows.

That night, Mordred comes before Arthur and pleads for Kara's release, revealing their history together and love for each other. However, Arthur refuses, bound by the laws of Camelot, and a deeply saddened Mordred leaves. Merlin knows immediately that he intends to help Kara escape. In the early hours of the morning, as Mordred and Kara flee from Camelot, Kara kills a guard in cold blood, leaving Mordred shocked. They continue to flee to the woods. The alarm is raised in Camelot as soon as Merlin tells Arthur about their elopement and with the knights, they set out to capture the fleeing fugitives. They soon find a cornered Mordred walking up towards them, his sword raised. He offers to exile themselves from Camelot if Arthur agrees to let them go. Kara telepathically urges Mordred to use magic to kill them, which is also heard by Merlin. However, Mordred is hesitant to use his magic against his friends, but as he prepares to use it, he is knocked out by Percival. They are taken back to Camelot and put into the cells. As they are imprisoned, a gallows is built.

Merlin, feeling bad about the situation, asks Arthur to reconsider. Arthur summons Kara to the court in the morning and tells her he will spare her life if she repents for the murders she has committed. She refuses, and stands firm on her beliefs that Arthur and Camelot must be destroyed. She is then hanged in public. Mordred, in grief and agony, escapes by blasting the doors off his cell with powerful magic. He goes to Morgana and tells her that he no longer sides with Arthur and Camelot. As a token of his loyalty, he explains that he knows the whereabouts of the sorcerer she has been trying to hunt down for years. He reveals that Emrys is in Camelot, and that his true name is Merlin. The episode closes as a look of confusion and shock clouds Morgana's face.

Previous Story: The Kindness of Strangers | Following Story: The Diamond of the Day 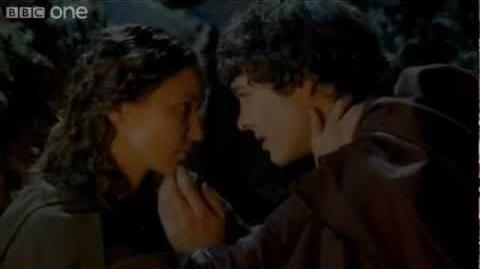 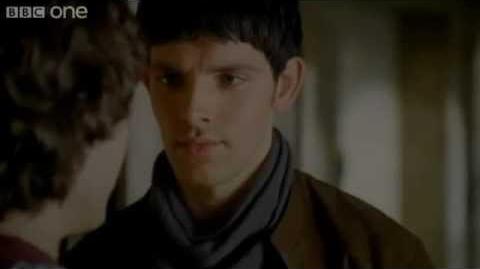