After being released, Merlin confronts Arthur again, and is baited into a fight using maces. Merlin uses his abilities in order to prevent Arthur from striking him, but winds up losing when he sees Gaius watching. Arthur spares Merlin more time in jail, citing his bravery and some indefinable quality about the boy. Meanwhile, Mary returns to Camelot in the disguise of Helen and dines with King Uther; she comments on the difficulty of Arthur growing up without a mother, and remarks that the bond between mother and son is nearly impossible to replace. That night, Merlin is again awoken by the same voice and sets out to find its source, winding up in a cave beneath the castle where Kilgharrah, The Great Dragon is imprisoned. The dragon insists that Merlin is destined to use his gifts to protect Arthur, despite Merlin's disbelief. 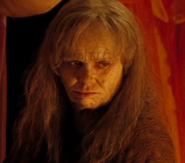 Rate this episode!
Retrieved from "https://merlin.fandom.com/wiki/The_Dragon%27s_Call?oldid=205010"
Community content is available under CC-BY-SA unless otherwise noted.