The Disir is the fifth episode of Series 5. [3]

When three soothsayers from the court of the Disir pass judgement on Arthur for rejecting the Old Religion, the young king sets out with Merlin, Mordred and a handful of knights to a sacred grove to demand an explanation.

But when Arthur refuses to appease the Disir, his patrol comes under attack and Mordred is critically wounded. Wanting to save the young druid, Arthur must make a difficult decision - accept magic back in Camelot or condemn Mordred to die.

What will he do and why is Merlin so reluctant to come to his aid?

In a dark cave, the Disir are chanting a spell. One of the Disir takes a coin from the water, which contains the judgement for Arthur. She gives it to a man named Osgar and tells him that the fate of Arthur is in his hands and he must honour it.

In Camelot, Mordred and Arthur duel with swords and Merlin watches them. Mordred triumphs over Arthur for a short while, but eventually Arthur manages to win. Arthur tells him he fought well and that he may have to start trying soon if he continues to fight like that. Later, he and Merlin go to his chambers whilst Arthur tells him that he thinks he will be one of the finest Knights of Camelot. Back in his home, Merlin helps Gaius put books in the bookshelf whilst he is discussing his suspicion towards Mordred with Gaius.

Sir Leon arrives in a council meeting. He tells Arthur and the Knights that the garrison in the forest of Brekfar intercepted Osgar who they tried to apprehend. He attacked them with magic and killed Sir Onoth. Arthur is clearly upset over losing one of his knights, and orders to highly alert all the men in the Eastern borders. He ends the meeting saying that he will personally lead a patrol which will bring Osgar to justice. He then goes to his chambers where Guinevere resides. She asks him if it is necessary for him to go because she nearly lost him the last time and he has many fine men to avenge Sir Onoth. Arthur tells her that he was his one childhood friends not just a Knight. Mordred comes in, and Arthur tells him that he is now ready to accompany him, and that he will join the patrol to the White Mountains. Mordred is very honoured and tells Arthur that he will not regret it. After he leaves, Arthur mentions to Guinevere that he thinks Mordred will make a very fine knight.

As the patrol is getting ready to leave, Sir Percival, Sir Elyan, Sir Leon and Sir Gwaine are making fun of Mordred, pointing out the things he might have left behind. At the same time Merlin asks Arthur if it was a good idea to bring Mordred as he is very young. Arthur tells him that he is a good fighter and deserves to be given a chance. The Knights and Arthur then leave Camelot. Merlin is stopped by Guinevere who asks him to take care of Arthur. After a short conversation he leaves as well. In the woods, the Knights are once again making fun of Mordred, by making him ride backwards on his horse. According to them, it is an ancient tradition of melding one must do on his first patrol.

As they search the forest, they see Osgar nearby. The group separates, with Elyan and Leon going together as well as Percival and Leon. The ones who stay with Arthur are Merlin and Mordred. Elyan and Gwaine manage to surround Osgar while he is resting. Gwaine is asking him what he is doing and what his purpose is. Osgar tells them his name and asks them to take him to their king. They point their swords on Osgars neck and he attcks them, which results in Gwaine piercing the sorcerer with his sword. As the two Knights come near Osgar again, he hits them both agaist trees, making them unconsious. Badly wounded, Osgar makes his way toward Arthur. Both Arthur and Mordred point their swords at him. Osgar informs them that he has been sent by the Disir to pass judgement on Arthur Pendragon. He gives Arthur the coin he received, and informs him that he has waged war with the people of the Old Religion. He tells to them what Lochru said to Merlin: that even has Camelot flowers, the seeds of her destruction are being sown. Before Osgar passes away, he tells Arthur that he still has a chance to change his ways. Soon Mordred sees Merlin building a grave for Osgar. He tells him that sorcerers are not permitted to have marked graves. Merlin tells him that he believes that one day they will have freedom again.

Merlin later applies poultices to Gwaine and says to Arthur that he will make a full recovery. Both Arthur and Mordred compliment Merlin on his physician skills and his cooking skills. They then toast for Mordred, as he has successfully completed his first mission. Merlin does not want to toast with them, and is worried about the judgement that has been cast upon Arthur. Arthur however is not worried, and tells him that he will let the coin be made into a memento of Camelot's success. The Knights arrive back in Camelot in the morning. Arthur seems to be worried about Merlin who has not been smiling for days. They go to Gaius who tells Arthur the coin is a runemark. Gaius tells them the Disir are the highest court of the Old Religion and that they interpret the word of the Triple Goddess. According to him, when they cast judgement it is final. The runemark did not only contain guilt of a man, but also the path that god had chosen for him. Arthur however is determined to choose his own path, but Gaius tells him that only when one repents and appeases the gods they can change their fate. 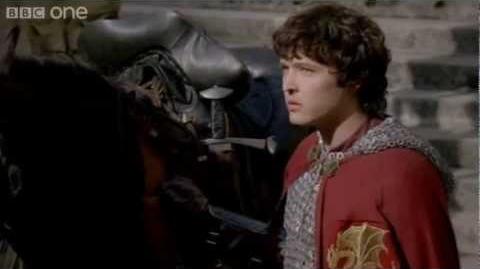 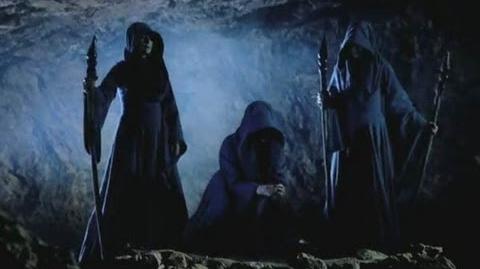 Previes 5x05
Add a photo to this gallery

Rate this episode!
Retrieved from "https://merlin.fandom.com/wiki/The_Disir_(episode)?oldid=140139"
Community content is available under CC-BY-SA unless otherwise noted.