“Take heart, for when Albion's need is greatest, Arthur will rise again.”
— Kilgharrah to Merlin[src]

The Diamond of the Day is the two-part finale of the fifth series that consists of the twelfth and thirteenth episodes; the final two episodes of Merlin. It marks the deaths of Mordred, Gwaine, Morgana Pendragon, and Arthur Pendragon as well as the long awaited magic reveal.

High in the mountains, a great horde gathers; Morgana prepares for war with a vengeful Mordred at her side. Merlin feels the weight of his destiny like never before as the ancient prophecies play out with terrifying accuracy. But before he can save his beloved Camelot, he must save himself. For it is not just the kingdom Morgana wishes to destroy – it is also Emrys. Do not miss this penultimate episode in the epic final series of Merlin.

And so it seems the Prophets did not lie. As the great battle rages on Camlann's mighty plain, Merlin faces his moment of destiny. Can he find the strength to save the man he made a King; the Camelot they fought to build; and the brotherhood they shared?

The Diamond of the Day starts with a mysterious figure entering Morgana's throne room; when he removes his cloak, he is revealed to be the powerful druid Ari. Morgana welcomes him and then makes him demonstrate his magical abilities. She suddenly applies an Gean Canach to him, draining him of his powers. Ari, weeping, is then forced to show that he has lost his magic. After the guards have taken Ari away, Mordred questions Morgana's actions regarding depriving an ally of his magic, but she reveals to him her plan: steal Merlin's magic as well.

An unknown man sneaks into Camelot under cover, whilst Merlin and Arthur gamble in the tavern. Merlin wins all the bets due to his magic. The man later appears in the castle and sneaks into Gaius' and Merlin's chambers where he places the box of the Gean Canach under Merlin's bed and knocks Gaius unconscious with a rock. That night, Merlin returns to his chambers only to be attacked by the Gean Canach. Gaius kills it using a spade but then realizes Merlin has lost his magic.

Morgana and Mordred attack Fort Stowell, a northern outpost of Camelot, and use magic to throw a burning fireball at the fort. In the fight, Gwaine finds a beautiful girl being dragged away by a Saxon. After a long fight, the girl, Eira, knocks the Saxon out and ends up inadvertently saving her rescuer's life. Leon orders the knights to retreat, since there are too many Saxons, and they and Eira return to Camelot. Back in the citadel, a conflicted Merlin wanders hopelessly around watching the casualties pour in and knowing he cannot help. However, Gaius encourages him to help as a physician and he helps heal Eira. During this process, Eira and Gwaine begin to fall in love and it is revealed that Eira lost her whole family in the attack. Afterwards, there is a meeting of the Knights of the Round Table (including Gaius, Gwen and Merlin) and Arthur proposes that Camelot make their stand at Camlann. Merlin is shaken by this and Gaius tells him that if Arthur goes to Camlann, he will die there. The now powerless Merlin confronts Arthur to tell him he will not be joining him on the the journey to Camlaan; little does Arthur know Merlin is going to get his powers back. Arthur sadly says "All those times I called you a coward....I never really meant any of them. I always thought you were the bravest man I ever knew. Guess I was wrong." and walks off.

Merlin and Gwaine ride off to the Valley of the Fallen Kings to restore Merlin's powers at the Crystal Cave (Gwaine is obviously unaware of this), but at the same time, Eira reveals her true loyalties- to Morgana- and rides to her castle. She tells Morgana where the King will make a stand and also that Merlin is travelling to the Valley of the Fallen Kings. Mordred reminds Morgana of the Crystal Cave and she rides off to intercept Merlin. Having told Gwaine to turn back, a lonely Merlin wanders through the Crystal Cave to find his powers, but he finds Morgana instead. He stabs her, but she isn't injured and therefore traps him in a small chamber of the Crystal Cave. He manages to crawl out and is visited by his father, Balinor, whilst lying helpless in the cave. Balinor gives him hope and tells him to rest. When he wakes, he has regained his powers; he talks to Arthur through a magical crystal and tells him that he has been betrayed and Morgana plans to trap his army. Arthur believes Merlin and orders Gwaine and Percival to lead an attack on Morgana's ambush force. He makes a speech to the rest of his men and then the Battle of Camlann begins. Merlin breaks free from the cave, in Emrys form, and rides for the battle.

The story starts where we left off in part 1, with the battle of Camlann now raging, Merlin, restored to full power finds his way back to Arthur, Gwen, Gaius, and his friends that battle for Camelot.

In the field of battle the knights of Camelot are being slain by the combined powers of Morgana Pendragon and her new ally Mordred. With the combined efforts of the Saxon army and a dragon to command, it looked like Morgana had finally won, until Emrys performed his greatest display of magic ever, using lightning to decimate the enemy troops and drawing them into a retreat, but not before Mordred finds Arthur and fatally wounds him with his blade forged in a dragon's breath, but before his time was up he stabbed Mordred with the brother sword killing him instantly.

Gwen awaits the arrival of the missing Arthur whilst patrol are out looking for their king, but Merlin finds the wounded Arthur and meets Gaius in the forest after Mordred's death. They try to tend to the king but have no luck the sword will no doubt kill him so Merlin has to take Arthur the king to the lake of Avalon where he will be healed by the Ancient magic of the Sidhe. Merlin reveals to Arthur his magic and makes him see it can be used for good, but Arthur being Uther's son feels betrayed and makes a snappy response pushing Merlin back; he tells Gaius and is shocked when Gaius reveals he has known all these years about him and that he can help Arthur rebuild the land, in a moment of love Gaius hugs his young ward and tells him when Arthur and Merlin return he would have Merlin's dinner waiting, he has a look in his eye that suggested he knew Merlin wouldn't return and given the royal seal for Gwen he leaves for Camelot.

Eira's treachery is revealed and she is executed on Gwen's orders and this is seen by Gwaine who becomes annoyed at Morgana. Gwaine then talks to Percival and asks him what he would do if he found Morgana, it is understood that they want to kill her. The two set off into the forest to kill Morgana. Gwaine and Percival find Morgana and ambush her aides however they fail and are captured. Whilst Percival is tied up, Morgana uses a Nathair to torture Gwaine about Arthur's location and Percival hearing his screams breaks free. He finds Gwaine and asks him what's wrong, he replies by saying he has failed them, Morgana knows where Arthur is heading. Gwaine dies in Percival's arms.

Merlin and Arthur begin their journey to the lake of Avalon. On the way Arthur begins to understand Merlin's talents and accept them. Less than a day's ride from the lake, Morgana catches up with them and scares the horses away. She blasts Merlin with magic and, believing her nemesis stunned, turns on Arthur and taunts him about his impending death. Before she can make a move however, Merlin approaches from behind with Excalibur in hand. The two face off, with Morgana confident in the belief that her status as High Priestess will protect her from Merlin's mortal blade. Merlin tells her that he blames himself for what she has become and then proceeds to run her through with Excalibur, revealing the unique nature of the sword as an immortal weapon before she dies. Merlin then attempts to get Arthur to the lake, but they have lost too much time and no longer have horses to carry them. Arthur bades Merlin an emotional farewell, acknowledging Merlin's deeds and accepting him as a friend before dying in Merlin's arms. Torn with grief, Merlin calls to Kilgharrah and the dragon carries them the rest of the way to the lake of Avalon. At the lake's edge Kilgharrah tells a heartbroken Merlin that there is nothing he can do, but to have faith, as Arthur will one day rise again when Albion's need is greatest. Merlin then throws Excalibur into the lake where it is caught by Freya's hand and drawn back under the water while he watches resignedly. Immediately following the returning of Excalibur to the Lady of the Lake, Merlin brokenly places Arthur's lifeless body into a boat and sends him out on the lake, weeping as he utters the spell to make the boat float away.

The show ends in modern times, as a truck rushes by, and an aged Merlin, in shabby but modern attire, is seen walking past what was once the lake of Avalon, waiting for Arthur to rise as Kilgharrah told him he is destined to do.

"The prophecy will come true, and he will die."

"The war has begun. Here at Camlann, we make our stand."

"This battle is the only way he knows how to save his people." 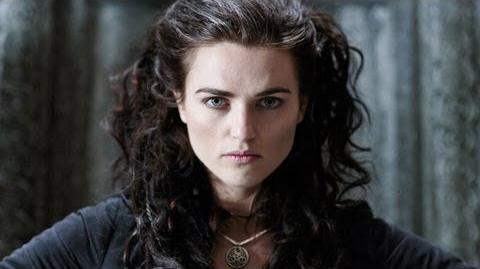 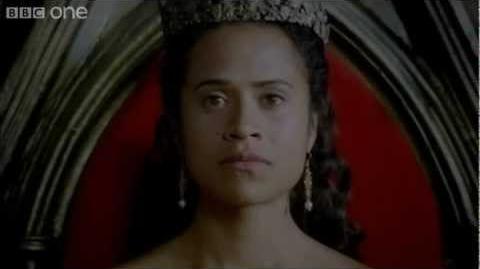 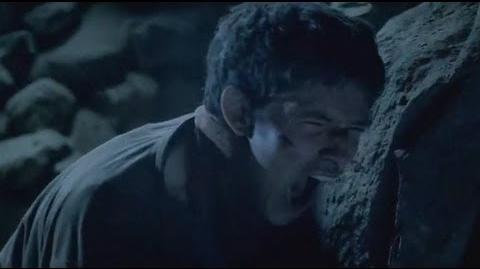 Merlin 512 Finale Trailer "The Diamond of the Day" Part 1

Previous Story: The Drawing of the Dark