“What you are about to do will affect everyone, even you. But most importantly, it will bring our enemies to their knees.”
— Morgause to Morgana[src]

The Darkest Hour was a two-part story consisting of the first and second episodes in the fourth series of Merlin which was first broadcast on the 1st and 8 October 2011. Set a year after The Coming of Arthur, the plot relates the events that followed. It also marks the deaths of Morgause and Lancelot as well as the introduction of Agravaine.

Merlin faces his toughest challenge yet when Morgana's blinkered determination threatens not only Arthur's future, but also the very balance of the world. With her magic now stronger than ever, the sorceress summons the mighty Cailleach to tear open the veil between the worlds.

Hellish creatures pour forth, killing all who succumb to their touch. With Uther a shadow of his former self, it falls to Arthur and his loyal knights, including Lancelot, to protect the kingdom, but it will take more than just swords to vanquish their enemy. Merlin is shocked to the core when he discovers the only way to restore the equilibrium is to make a sacrifice of unimaginable proportions.

The kingdom is on the brink of collapse and Morgana poised to strike. As Lancelot races back to Camelot with the dying Merlin, Arthur must continue on his mission to vanquish the Dorocha without them. Though the Knights know their journey to the Isle of the Blessed is fraught with danger, none could anticipate the sacrifice Arthur intends to make there. Friendship and loyalty are tested to the limit, it could be the end for Merlin .... but in the end, the power of love changes all their lives forever.

Sir Leon, Sir Elyan, and two other knights of Camelot cross paths with Morgana in the middle of a wasteland, and are subsequently knocked unconscious by her magic. Morgana unwraps the cargo on her cart to reveal a disfigured and weak Morgause. Back in Camelot, life has just about returned back to normal, with the exception of Uther, who is still stricken and ill a year after Morgana's betrayal. Arthur's maternal uncle, Sir Agravaine, now acts as mentor and council to the prince.

Leon and Elyan return to court (the other two knights did not survive) to warn Arthur of Morgana. That night, as Camelot feasts, Morgana and Morgause arrive on the Isle of the Blessed, where the dying Morgause convinces Morgana to sacrifice her to tear open the veil to the other world and unleash other worldly horror upon their enemies. Morgana hesitates, but upon Morgause's insistence, she complies. When the sacrifice is made, Morgana becomes unconscious and, miles away, so does Merlin. Both witness the arrival of The Cailleach, the gatekeeper of the "veil between our world and the next," who calls Merlin "Emrys" and tells Morgana, though her enemies will suffer like never before, she also needs to be aware of Emrys, who is both her "destiny" and her "doom".

In Camelot, Gaius suspects the veil to the underworld has been torn, most definitely by Morgana. A girl from a town in the outskirts arrives, telling Arthur and the knights about the death of her village at the hands of beings with no faces that screamed. Gaius identifies these creatures as the Dorocha, the spirits of the dead. When Arthur, the knights and Merlin visit the village, Merlin and Sir Lancelot discover Merlin's magic does not work in the presence of the Dorocha.

The Dorocha attack Camelot, and the only way to repel them is with fire and light. The castle dungeons are soon filled with corpses of victims who have been frozen to death at the touch of the Dorocha. People from all over the lower towns gather in Camelot for protection, and Percival and Elyan nearly lose their lives while saving three children from the Dorocha in town. Merlin grows terrified of the Dorocha because his magic is useless against them, telling Gaius he has never felt so weak. When Merlin asks the seemingly at ease Arthur whether the prince is afraid, the latter confesses he is probably more afraid than Merlin.

Arthur, Agravaine, and Merlin learn from Gaius the only way to close the veil may be to travel to the Isle of the Blessed and make another sacrifice. Arthur volunteers himself and tells the inert Uther his decision. As he is about to leave, Uther suddenly takes his hand and asks him not to leave, to which Arthur replies through tears he must. Gwen, who is taking care of Uther, also asks Arthur not to go, but he makes her smile by asking her if she remembers the time he first kissed her. Merlin also prepares to depart; when Gaius asks him not to seeing as his powers don't work against the Dorocha, Merlin reveals his plan to sacrifice himself in place of Arthur. Meanwhile, Agravaine, who is loyal to Morgana, visits her inside her hiding place and informs her of Arthur's plan.

Arthur, the Knights of the Round Table, and Merlin leave for the Isle of the Blessed. Lancelot continually encourages Merlin to leave and protect himself, but Merlin refuses. They arrive at the castle ruins where they gather wood for a fire but they can hear the Dorocha are present. The group gets a fire going which keeps them safe for awhile but they eventually run out of wood. Arthur and Merlin collect more firewood, but one of the Dorocha attacks them and they lose their torch. The remaining knights, with only one torch left between them, decide to search for Arthur and Merlin. Hiding in an abandoned room, Arthur and Merlin attempt to reassure each other and Arthur tells Merlin he is "a brave man," then joking adds "between battles." Merlin replies, "You have no idea how many times I've saved your life," to which Arthur says if he ever becomes king, he will make Merlin the court jester. One of the Dorocha finds Merlin and Arthur's hideout as Lancelot and the others battle their way through the dishevelled castle with only one torch. As Arthur is about to rise, Merlin shoves him down and jumps to face the Dorocha himself, jumping straight though it and being flung across the room and hitting the wall. Lancelot and the other knights barge into the room and vanquish the Dorocha. The knights rush to Merlin's still form slumped by the wall. Part I ends with Arthur turning over Merlin's limp body and seeing Merlin's face is frozen with white ice and Merlin appears to be dead.

Merlin survives the attack by the Dorocha but appears to be dying from his wounds. Arthur plans to take Merlin back to Camelot so Gaius can cure him because he cannot bear to see Merlin die in his place, when Sir Leon tells Arthur they cannot abandon the quest to the Isle of the Blessed as more people will get killed by the Dorocha. Sir Lancelot volunteers to take Merlin with him back to Camelot while Arthur, Leon, Sir Elyan, Sir Percival, and Sir Gwaine continue on the quest. Lancelot stops along the way and encounters some creatures called Vilia who are spirits of the rivers and they tell Lancelot they will protect them from the Dorocha and heal Merlin.

The next day, Merlin has recovered from his injuries and he, along with Lancelot, pursue Arthur and the others as Merlin believes Arthur will need his  help to complete the quest. Arthur and the others take a shortcut through some caves to save time in their journey towards the Isle of the Blessed. Inside the cave infested with Wilddeoren the party narrowly escapes. Merlin and Lancelot stop at a deserted house where they stay the night. While there, a Dorocha attacks them during their sleep, and they escape. As Lancelot and Merlin run through the nearby trees Merlin summons Kilgharrah, the Great Dragon, who repels the Dorocha with his fire. Kilgharrah asks Merlin who his friend is and on hearing from Lancelot who he is, Kilgharrah calls Lancelot the bravest and noblest of them all. Kilgharrah also tells them the Dorocha cannot remain in the living world and a sacrifice will be demanded by the Cailleach to close the veil between the living and the spirit worlds so the Dorocha are defeated. Merlin tells Kilgharrah he means to sacrifice himself in Arthur's stead. Kilgharrah replies that ''it will be a empty world without you, Young Warlock'' .

Meanwhile, back in Camelot, Agravaine, who was given charge of the kingdom in Arthur's absence, has the gate to the lower town closed to prevent food from running out and Gaius angrily confronts him about it. Gwen persuades the council to reopen the gate and Agravaine reluctantly agrees. Agravaine meets Morgana, telling her about Gwen and Morgana, after telling him that she had a vision of Gwen becoming Queen and marrying Arthur, plans to kill her so her vision does not come true. As Gwen tends to Uther, Agravaine apologises to Gwen and summons her to his chambers to give him advise while Morgana enters Camelot through a secret tunnel. When Gwen leaves Agravaine with some knights guarding her, Morgana knocks them unconscious with her magic before leaving. Gaius finds Gwen and cures her, telling her someone wanted to get rid of her and knocked her out so the Dorocha would kill her.

Merlin and Lancelot catch up with Arthur and the others and rejoin them as they continue their journey to the Isle of the Blessed. Arthur plans to sacrifice himself to close the veil despite Merlin telling him not to. They eventually arrive at the Isle of the Blessed but are attacked by Wyvern. Merlin commands the Wyvern to leave but more Wyvern arrive. While Leon, Elyan and Percival hold off the Wyvern, the others move on and encounter the Cailleach. Arthur tells the Cailleach to close the veil, but she should not be the one to do it as she did not tear open the veil.

After she knocks Gwaine unconscious with her magic to prevent him attacking her, Arthur then tells her he will sacrifice himself but before he can, Merlin knocks Arthur unconscious with his magic and steps toward the Cailleach. The Cailleach tells Merlin his time among men has not ended even if he wanted it to be and therefore he cannot sacrifice himself. Merlin then looks up to see Lancelot approach the veil. He looks briefly back at Merlin and smiles, before walking into the veil with his arms outstretched and vanishing as the veil closes.

After Arthur, Merlin and the remaining knights return to Camelot, a funeral is held for Lancelot and Arthur says Lancelot was one of the bravest and most noble knights Camelot has ever had. Gwen tearfully tells Arthur that Lancelot did not sacrifice himself for Camelot but sacrificed himself to fulfill his promise to her of protecting Arthur with his life. Meanwhile, Morgana is enraged her plans have failed and tells Agravaine of her belief Emrys was the one who thwarted them as the Cailleach warned her about him, telling her Emrys was her destiny and her doom. She asks Agravaine to help her find Emrys and kill him. Agravaine goes to Gaius's chambers and asks Gaius if he knows of Emrys. Gaius replies he doesn't know who Emrys is. Gaius tells Merlin that Morgana has also seen the Cailleach and she knows of his identity as Emrys. Gaius also tells Merlin he suspects Agravaine is loyal to Morgana because only Morgana would have heard the word Emrys from the Cailleach and warns Merlin, Morgana should never know the truth about Merlin's magic and he is Emrys.

Merlin and Arthur hide from the Dorocha

The sisters travel to the Isle of the Blessed 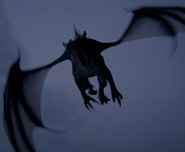 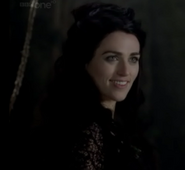