Not to be confused with the tower that appeared in this episode, for the location, see The Dark Tower (Location)

Gwen and her brother Elyan stand at a pile of rocks which mark the grave of their father, Tom. Gwen and Elyan recollect how he was a good father. Not long after, they ride through the woods on their horses, with Leon, Gwaine and Percival, and begin to joke around. Little do they know that Morgana is close. She casts a spell on a nest on snakes which makes them aggressive, and they bite Percival and Leon who are knocked off their horses. Leon advises Gwen to ride over to the tree, and Gwen heads straight in the direction where Morgana is standing. Gwen turns the other way and attempts to ride off, but Morgana pulls her off the horse with a magical force and Gwen falls to the ground, unconscious.

The knights arrive back at Camelot, and Percival and Leon are taken in stretchers to be treated by Gaius. Elyan reports to Arthur that Gwen is missing and Arthur tells Merlin they ride at dawn. Gaius meanwhile treats Leon and Percival, commenting that the snake bites are a result of dark magic and that they should be dead. Gaius suspects there is more to the snake bites than luck, suggesting the snakes were set up. Merlin walks into Arthur's room without knocking, to Arthur's irritation. Merlin tells Arthur that Leon and Percival are recovering, but that there is evidence of sorcery and Morgana is involved in what happened in Gwen's kidnapping and the snake bites. Merlin assures Arthur they will not lose Gwen and they will find her. He shakes Arthur's hand.

As the knights of the round table head off on their horses towards the same woods where Gwen was kidnapped, Morgana wakes Gwen up and tells her she wants to play a little game, to find out just how much Arthur loves her. Gwen tells Morgana Arthur is not stupid and knows it's a trap, but Morgana rebuts by telling her he will come anyway. The knights find Gwen's horse from which she was pulled off by Morgana. They see the damaged saddle and that Gwen was pulled by force. Percival spots tracks and sees that they are heading east. Arthur leads the way up a hill. Morgana pulls Gwen along on her horse deeper in the woods and Gwen collapses. Morgana offers her water but Gwen refuses. Morgana taunts Gwen for taking her crown, and pours the water onto the ground right in front of Gwen, and gets back on the horse and continues. The knights ride deeper into the forest, as Morgana nears The Dark Tower, in a land where everything surrounding is dead.

At the camp, Arthur talks to Elyan and tells him he cannot blame himself for not being able to save Gwen earlier. Elyan admits Gwen is the reason he is who he is. Arthur puts his arm around Elyan and cheers him up. Later in the night, Percival and Leon wake to the same nightmare- they describe The Dark Tower, a place that knights dread. Arthur is familiar with the tower, describing it as a place that can bring doom to those who even hear of it. Gwaine lightens the moment by describing his dream about eating a cheese that tasted like apple pie, and goes back to sleep as the others gaze at him awkwardly. Merlin tells Arthur that the visions were planted by Morgana, and are an indication that they are walking into a trap.

Gwen wakes in the tower, by the drops of the mandrake root. Screams and presences begin to haunt her again, as she covers her ears in terror. The following morning, Arthur announces he will travel alone to the Dark Tower, but the others insist they go too. The knights begin riding once again, and end up at a cliff where they get a clear view of the Dark Tower. Merlin asks how they get to it, and Arthur says through the Impenetrable Forest. Gwaine and Merlin question this, but Arthur insists. The knights begin cutting their way through the ivy of the incredibly dense forest. Gwaine struggles the most. In the tower, Gwen sees a hallucination of Elyan who laughs and taunts her. The knights continue cutting their way through the forest, heading north. Arthur says they should pick up the pace. In the tower, Gwen sees a hallucination of Merlin who is peeking around the corner, beckoning her. Gwen resists going to the hallucination, and backs away, but it pops out from the pillar behind her. Morgana then opens the doors and invites Gwen to dine with her. The knights realise they are going around in circles, as a piece of Gwaine's cape which shredded off earlier is found. Arthur is enraged that they have wasted an entire whole day so Leon suggests they make camp for the day and get some rest so they are fresh in the morning. Arthur sits, upset, and Merlin assures Arthur and Elyan, who is listening on nearby that he made a promise and they will bring Gwen home.

Morgana and Gwen sit at a table covered in cobwebs within the Dark Tower. Morgana tells Gwen that food always makes her feel better, and insists Gwen eat, but she refuses and says whatever trick Morgana is playing, she won't be broken by it. Morgana tells Gwen about her suffering, saying that she is ungrateful for not taking well to Morgana's offer of food in comparison to what Morgana went through, being chained at the bottom of a pit for two years. Gwen appears to be slightly moved by this. At the camp, Merlin senses the presence of Mab. He follows it, where he meets the impish Queen, who knows he is Emrys, who is the spirit of the place they are within and every place that brings despair to the hearts of men. Mab speaks in riddles, much to Merlin's annoyance, and tells him the way ahead is the opposite way they think. She also tells him someone will not come back alive, then vanishes before Merlin can ask more questions. The sun casts upon the forest and the knights continue travelling. Arthur says they need to find a clearing. Merlin says for them to head north and tells him which way north is, and he and Elyan convince Arthur to give Merlin a chance. Merlin uses his magic to lead the way ahead, using a satellite vision to visualise the path ahead. They exit the forest and now have direct view of the tower, which lays in a desolate piece of flat land ahead.

Gwen wakes again, sensing a hallucination behind her. The door opens and Morgana enters, smiling, once again asking her to come and dine, this time walking further in and following Gwen around a pillar. Morgana feels Gwen's hand and comments on it being cold and offers her anything she would like, but Gwen resists. Morgana leaves again and locks the door behind. As soon as it closes the screams begin again for Gwen. The knights approach closer to the tower, walking across the long and dry dusty tracks. Percival sits down and takes his boot off, revealing a large blister. Gwen lies in the dark room, dimly lit by small beams of sunlight coming in through the ceiling. She mutters to herself, covering her ears, showing signs of being broken. The knights continue through the plains, and Merlin slips and falls down a hill, landing among the corpses of dead soldiers. He almost falls onto one of the swords. He climbs back up and Percival lifts him up to their level again. Gwen begins to hear a hallucination of Arthur, who appears behind her then walks up above her. She tries to resist the hallucination but looks up at the hallucination and laughs begin filling the room again, Gwen trying to block them out by clutching her head. The knights arrive at the Dark Tower. The hallucinations begin to intensify to a climax, ghost Merlin popping out once more. Morgana enters and the hallucinations stop. She tells Gwen she is no torn but can no longer lonely because she says her. Gwen appears to succumb, but resists once more and says she would rather die.

The knights enter the doorway of the Dark Tower, and draw their swords. They climb the same staircase Morgana and Gwen did earlier, encountering several skeletons on the way. As they climb the staircase Merlin spots Arthur and tell him something is wrong- venturing the tower appears too easy. As usual, Arthur rebuts by telling Merlin he is never pleased. The knights enter a room filled with booby traps- traps which set off darts. Percival is stricken by a dart and Merlin stops Arthur which almost strikes Arthur in the head. Elyan pushes on, separated from the others. He then walks into a room where a trap lays that is designed for Arthur. A hovering sword, enchanted by Morgana, guards Gwen and attacks Elyan. Despite Gwen's warning that the sword will kill him, Elyan fights it and is pierced by the blade. He hurls it out of a window and shuts the window. The sword comes back but is jammed in the window. Elyan falls, mortally wounded, and Gwen holds him as he says his last words, which involve their father, Tom. The rest of the knights and Merlin enter the room to see Gwen holding a now dead Elyan.

Sir Elyan's funeral takes place, with all the knights, Arthur, Gwen, Merlin and Gaius attending. Elyan's body is burned at the same lake Lancelot and Freya were burned. Merlin tells Gaius he was warned one would not return, and Gaius says the blade that pierced Elyan would've most certainly been intended for Arthur. That night, a now brainwashed Gwen leaves Arthur's chambers to go and meet Morgana, the one she believes she only has left now. The two have a sweet reunion, Gwen revealing herself to now think that Morgana is and was always her only loyalty and that she hates everybody in Camelot. Morgana says Gwen has an important part to play in the future and that together they will ensure the destruction of everything Arthur holds dear. 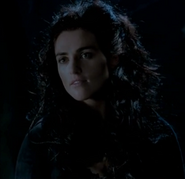 Previous story: The Disir | Following story: A Lesson in Vengeance