“Gaius, you don't understand. There's something you should know. Something I've told no one...”
— Uther to Gaius

The Crystal Cave is the fifth episode of the third series of Merlin which was first broadcast on the 9th of October 2010.

Merlin has an unexpected meeting with the mysterious Taliesin. The wizened old sorcerer takes the young warlock to the Crystal Cave and shows him a glimpse of the future, but this gift turns out to be a curse when to his horror, Merlin sees Morgana... set to kill Uther.

Merlin knows he must do all that he can to stop the future from playing out, but changing the pages of destiny is a dangerous game and his actions have fatal consequences. With the whole of Camelot in a state of grief, can the young warlock undo the damage he has caused, or is it too late?

Merlin and Arthur are chased through the forest by a gang of armed bandits. They enter the supposedly cursed Valley of the Fallen Kings to escape them, which alerts Merlin's magical senses. Arthur is hit in the back by a bandit's arrow and collapses, forcing Merlin to hide with an unconscious prince, while the bandits ride past. He then attempts to use magic to heal the prince's wound, but to no effect. As Merlin begins to lose hope, he is confronted by an old man named Taliesin, who claims that their meeting has been written. Taliesen has powerful magic and heals Arthur. Leaving the prince to recover, Taliesen takes Merlin to the Crystal Cave, where the young wizard has sees series of terrifying visions in the crystals - a crowned Morgana sitting upon Camelot's throne, an elderly man being led away, Morgana struggling with a white horse and then her unsheathing an ornate dagger, followed by her walking down a hall in her red cloak, a hand seemingly dripping with blood, Merlin himself surrounded by fire and finally Morgana stabbing Uther with the ornate dagger. Merlin then returns to a recovering Arthur.

Arthur recovers completely and he and a distracted Merlin head back to Camelot the next morning. Arthur thanks Merlin for his help and offers him a reward, but Merlin is distressed by his vision and rejects Arthur's offer. Back at the citadel, Merlin reveals his vision to Gaius, who reveals that Taliesen was a great seer who died 300 years ago. Merlin fears that the events he saw will occur soon, but Gaius warns him that the cave's magical crystals are treacherous.

The following morning, Arthur is up early to buy Morgana a present for her approaching birthday - a dagger. Merlin also sees the King's ward struggling with a horse, as in one of his visions. He tells Gaius that the things he saw are beginning to come true. Later, however, Arthur shows Morgana's present to Merlin and it is a plain knife - quite different to the ornate dagger from the vision. A relieved Merlin tells Arthur that women generally prefer pretty things like jewellery.

That night, a feast is held for Morgana's birthday. She is presented with Arthur's present - the ornate dagger from Merlin's vision. The prince tells Merlin that he took his advice and bought Morgana something "pretty". Later, Merlin becomes worried and decides to watch Morgana, hiding outside of her chamber. Inside, Morgana receives a message from Morgause via a magic mirror - "Sister, come to the darkling woods at midnight, Morgause."

At midnight, Morgana sneaks from her chamber with the dagger. Merlin concerned that she intends to kill Uther, follows her closely & uses magic to slam a door in her face, but the closing door knocks over a flaming torch, which falls towards Morgana. She leaps out of the way but trips and tumbles down a set of stone steps. Arthur carries the injured and unconscious Morgana to Gaius, while Gwen fetches medicine. Gaius reveals that Morgana's cranium is broken and she is suffering from internal bleeding. A distressed Merlin hides in his room, telling Gaius that although he wanted to change the future, he did not mean for this to happen. The citadel is in mourning - Uther watches over Morgana while Arthur holds Gwen as she cries. Uther tells Gaius that Morgana cannot be allowed to die and that he must do whatever he can to save her. The King implies that he would even allow Gaius to use magic. He explains to his friend that Morgana is more than just his ward and reveals to the very hesitant Gaius, who warns Uther to not risk everything by using magic, that Morgana is his daughter. He confesses that he had a brief affair with Morgana's mother, Vivienne, while Gorlois was away at the Northern Plains, which is overheard by Morgana, unknown to Gaius and Uther. Gaius promises to keep the secret, which a shocked Merlin overhears as well. That night, Morgana's condition worsens and Gaius tells Gwen that she will be "gone by morning". Merlin then meets with the Great Dragon and describes his vision, begging the creature to help him save Morgana. The dragon refuses, but Merlin uses his powers as a Dragonlord to command it. The creature concedes and casts a powerful spell, warning Merlin that the evil that follows will be of his own doing. Merlin visits Morgana and uses the dragon's powerful magic to heal her.

In the morning, Morgana is fully recovered and a delighted Uther believes that Gaius is responsible. Gaius realises the truth and warns Merlin that he is toying with powerful forces. In Morgana's chamber, she tells Uther that he is like a father to her. She regrets that the people of Camelot consider her only Uther's guest, but he insists that it does not matter what the people think.

That night, Morgause sneaks into the citadel, drugging the guards on duty. She meets with Morgana, who explains that she previously overheard Uther and knows that he is her real father. Morgana is furious that Uther has lied to her and insists that he must pay for his actions, but Morgause tells her that she now has a claim to the throne and must not do anything rash. As Morgause departs, Merlin and Gaius discover the unconscious guards. One has dropped a goblet of wine and the red, blood-like liquid drips from his fingers, just as in Merlin's vision. The young wizard realises that he has not prevented the future he foresaw.

Merlin runs to Morgana's chamber and they argue. She uses magic to throw him back into a stone wall, knocking him unconscious. A flaming candle is knocked over in the struggle and fire begins to spread through the chamber. Morgana leaves Merlin to die and heads toward Uther's bedroom. Merlin awakes and chases her, arriving just in time to see her raise the knife above a sleeping Uther. He uses magic to blow open the bedroom window with great force, sending Morgana flying backwards. A startled Uther wakes and, while Merlin remains hidden, Morgana claims that she had been scared by the fire and that she only feels safe at Uther's side.

Later, Merlin speaks with Gaius, frustrated that in trying to stop the future, he made it happen. Gaius tells him that he is afraid that Morgana knows the truth about her parentage - it would explain why she acted so quickly against Uther. He warns Merlin that Arthur must be careful - if Uther dies, the prince will be the only thing standing between Morgana and the throne of Camelot.

A flash of Morgana's reign

The Coronation of Morgana in The Coming of Arthur

A flash of Emrys

Emrys in Queen of Hearts

Flash 5 Morgana walking down a corridor in her red cloak

Flash 7 Merlin yelling near a blaze of fire

Flash 10 Morgana walking down a corridor in her red cloak

Flash 12 Merlin yelling near a blaze of fire 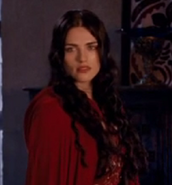 Rate this episode!
Retrieved from "https://merlin.fandom.com/wiki/The_Crystal_Cave?oldid=213027"
Community content is available under CC-BY-SA unless otherwise noted.