The Coronation of Queen Guinevere takes place sometime after Morgana's second takeover of Camelot and the wedding of King Arthur Pendragon to former servant girl Guinevere.

During the final moments of the battle with Morgana and Helios' army, Merlin and Gwen return to the throne room to see their new friend Isolde, dying in the arms of her lover Tristan. Upon witnessing Isolde's death, Arthur realises that he cannot lose Gwen again and forgives her for her crime of 'adultery' with Lancelot. Upon returning to his chambers, he finds

Gwen cleaning up. After telling her that he didn't care what she might have done in the past and that he cannot bear to lose her again he proposes to her again, to which she happily accepts. Sometime later, the pair are married and a coronation is held. The doors open to reveal (similar to Morgana's vision) Guinevere walking down the centre of the Throne room with a proud looking Arthur watching her. She then kneels before him. He then crowns her his queen before sharing their first kiss as a royal couple. A chorus of 'Long live the Queen' echoes through the room as Merlin, the knights, Gaius and everybody else watch on happily (The Sword in the Stone). 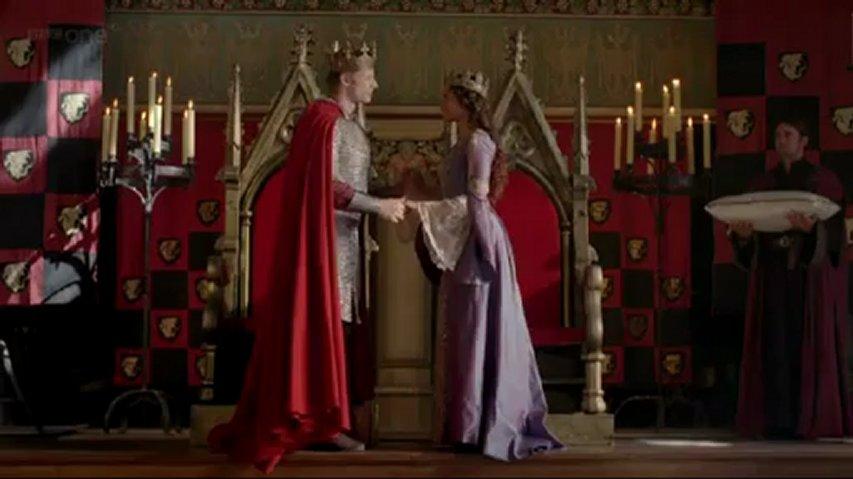 Retrieved from "https://merlin.fandom.com/wiki/The_Coronation_of_Queen_Guinevere?oldid=199900"
Community content is available under CC-BY-SA unless otherwise noted.