“You were right. Poor girl, no wonder she's got a wind problem. You should see what she's got trapped inside her!”
— Merlin to Gaius

The Changeling is the sixth episode in the third series of Merlin which was first broadcast on the 16th of October 2010.

Arthur is pressured into an arranged marriage with a visiting princess, Elena, as the fantasy drama continues. Yet Merlin has his doubts when he discovers Elena may not be exactly who she claims to be. While trying to uncover her dark secret, Merlin learns that Elena's nanny Grunhilda is a Pixie. But who is she working for? And what do they have to gain from her marriage to Arthur – the heir to the throne of Camelot? Can Merlin get to the bottom of this mystery before Arthur makes the biggest mistake of his life?

'The Changeling' begins 20 years in the past, as a Sidhe creature casts a spell over a sleeping baby. In the present day, the clumsy and inelegant Princess Elena and her father Lord Godwyn travel to Camelot, accompanied by the royal nurse, Grunhilda. Uther attempts to convince Arthur of Elena's good qualities, but the prince seems unconvinced. As Godwyn and Elena arrive, Uther admits that he wants Arthur to marry the princess in order to forge an alliance between the two kingdoms. However, Arthur is less than impressed with the clumsy Elena. Later, Gwen asks a clearly glum Arthur what is troubling him - he explains that his father is attempting to force his marriage to Elena, but tells a concerned Gwen that he has no intention of marrying the princess.

That night, Arthur tells Merlin that he can see no family resemblance between Elena and Godwyn, which leads Merlin to suggest that she could take after her mother. Arthur reveals that Elena never knew her mother and Merlin suggests that the pair have more in common than the prince might think. Uther pays Arthur a visit and reminds him that the safety and security of Camelot rest on his union with Elena, but Arthur protests that he has no feelings for the princess.

Meanwhile, Elena is caught in a troubled sleep, which is soothed as Grunhilda sprinkles her face with pixie dust, revealing Elena's true fairy form. Grunhilda sneaks out of the castle into the forest and reveals her own true face - she is a pixie. She meets with the Sidhe's King, the Sidhe elder and assures him that the planned marriage will go ahead. Elena has no idea that a fairy has been planted inside her, but once she marries Arthur, the creature will emerge and the Sidhe will control Camelot.

The next day, Arthur and Elena ride their horses in the forest, with the princess rushing ahead. When they finally stop at a riverside, Elena explains that she got her horse riding skills from her mother. Arthur presents her with a rose that he has picked, but the bumbling princess sneezes in his face after sniffing the flower. Merlin finally catches up to the pair and Arthur orders his servant never to leave him alone with Elena again.

That night, a feast is held, where Godwyn and Uther discuss the potential marriage. Grunhilda takes a shine to Gaius and begins flirting with him, which makes the physician quite uncomfortable. That night, Elena worries that she is not the "perfect princess" and admits that she is only trying to make her relationship with Arthur work for her father's sake. Grunhilda reassures the princess and presents her with "our little secret" - a toad, which Elena gobbles down.

In the forest, Merlin is collecting plants when he spots Grunhilda. He is shocked to discover that the nurse is using a long, purple, lizard-like tongue to catch and eat flies. Merlin runs back to the castle and warns Gaius that a magical creature has infiltrated Lord Godwyn's households. Gaius sneaks into the guest chamber and discovers the bag of pixie dust underneath Elena's pillow. He is discovered by Grunhilda, who believes that Gaius is paying her a visit for a romantic rendezvous. Having escaped the amorous nurse, Gaius tells Merlin that pixies are the servants of the Sidhe and Elena is likely a Changeling - implanted with a fairy from birth, which explains her clumsy nature. Once she marries Arthur, the Sidhe will control the future queen of Camelot.

Uther, Arthur and Morgana dine while Gwen waits on them. The trio discuss Arthur's upcoming marriage, much to Gwen's discomfort. Arthur insists that he cannot marry someone he doesn't love, but Uther demands that the marriage will take place. Arthur and Gwen exchange a longing look, which is noticed by Morgana. Meanwhile, Merlin perches on a stool to peak into Elena's chamber as she once again suffers from troubled sleep. As Grunhilda sprinkles the pixie dust and reveals the princess's fairy form, a shocked Merlin falls from the stool. Grunhilda is attracted by the noise and spots Merlin as he flees the scene. Merlin tells Gaius that he was right about Grunhilda's true nature and Gaius declares that they must find a spell to force the fairy from Elena. After much research, they discover an ancient potion but Gaius is uncertain of how to make it. In her chamber, Morgana tells Gwen that Arthur may be forced to marry Elena, if his heart belongs to another. She confronts Gwen about her feelings for Arthur, which the servant girl eventually admits to. Gwen insists that her and Arthur's feelings cannot come to anything and Morgana agrees that the prince cannot change 200 years of history. Later, Gwen visits Arthur and they discuss their forbidden feelings. Gwen tells him that to an outsider their romance is an insane idea, but Arthur insists that he would rather be insane than miserable. Gwen tells him that if he were to marry Elena, she would stand by and watch him grow into the king that Camelot deserves.

Gaius tells Merlin that he is working on the potion, but requires a rare flower to complete it. A muddy Merlin retrieves the flower from the depths of a bog and Gaius explains that Elena will be a new person once the fairy leaves her. Meanwhile, Arthur publicly proposes to Elena, while an unhappy Gwen watches.

Grunhilda informs the Sidhe elder that Merlin has uncovered their plans, who then infiltrates Camelot and attacks a sleeping Merlin in his room. The boy wizard manages to escape and destroys the Sidhe elder with his magical staff. However, in the scuffle, the bottle of fairy potion is smashed. Gaius concocts a new batch and a cheeky Merlin devises a plan to lure Grunhilda away from Elena.

Gaius lures Grunhilda into the vaults beneath Camelot with the promise of romance, but he and Merlin lock the pixie in, using magic to secure her. Grunhilda manages to escape and chases the pair, but Merlin fights her off with his magic staff. Gaius attempts to convince Elena to drink the potion, claiming that it will calm her wedding nerves, while Merlin blasts Grunhilda into dust. Elena gently sips the potion, but Merlin pinches her nose and pours the mixture down her throat, forcing the fairy out of her and Merlin uses his staff to destroy the fairy.

Merlin visits a depressed Arthur and relates to the prince's worries about a destiny that he cannot escape. Merlin tells his friend that an unhappy king will not make a great leader and that it is his choice how he rules Camelot when the time comes. The wedding of Arthur and Elena begins, with the princess having now become a graceful and elegant bride. Nonetheless, Arthur calls off the ceremony. He and Elena agree that they do not love each other and happily decide to cancel the wedding. A furious Uther tells Arthur that he will never be ready to be king until he puts his duty before his feelings, but Arthur insists that he will be a better king with the support of a woman that he loves.

As Godwyn and Elena prepare to depart Camelot, Arthur notices that there is something different about the princess. As she leaves, Elena teases Arthur that she will happily beat him in a horse race anytime. Despite the failed marriage, Godwyn tells Uther that his son has the makings of a great king and that he should be proud of him. Later, Arthur meets with Gwen and she teases the prince that Elena was far too lovely to marry him. Arthur admits that his heart belongs to another and tells Gwen that only time will tell if he will ever be able to unite with the one he truly loves. 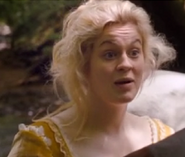 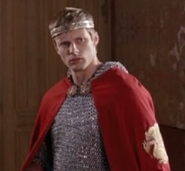 Rate this episode!
Retrieved from "https://merlin.fandom.com/wiki/The_Changeling?oldid=213062"
Community content is available under CC-BY-SA unless otherwise noted.