“It is destiny, my love! Destiny and chicken. What a beautiful combination, eh?”
— Arthur to Vivian

Sweet Dreams is the tenth episode of the second series of Merlin which was first broadcast on the 28th of November, 2009.

Dignitaries from "the Five Kingdoms" descend on Camelot for peace talks, but what King Alined really wants is war, and he'll do everything in his power to stir up hostilities, even if it means using magic. Alined's jester Trickler puts a spell on Arthur to make him fall madly in love with rival King Olaf's daughter Vivian. Chaos reigns in the palace and Camelot is once more poised on the brink of war. Can Merlin free Arthur's heart before the prince loses his head in battle?

It is a momentous time in Camelot when five kings from the surrounding kingdoms arrive for a series of peace talks. Amongst these arriving are King Olaf and his beautiful daughter, Vivian, and King Alined and his trouble-making jester, Trickler. King Alined, thirsty for war, devises a plan which would enchant Arthur into falling completely in love with Vivian, angering King Olaf and bringing war to Camelot. After showing the Lady Vivian to her chambers, Arthur finds her rude when she comments negatively on the quality of her room and insults Gwen in his presence. Outside the room Arthur and Gwen laugh at Vivian, Arthur wishes Gwen luck with her before sharing a tender glance and departing. Arthur disregards Vivian as rude to Merlin, who comes to the conclusion that he only really thinks so because of Vivian's comments regarding Gwen. That evening, a great feast is held before the guests and Trickler amazes everybody with his magic. He cleverly steals a strand of Vivian's hair and makes a love potion, which he then drops into Arthur's eyes as he sleeps.

When Merlin enters Arthur's chambers the next morning, he is surprised to find Arthur already dressed and acting out of character. Arthur, enchanted by the vision of Vivian, reveals to Merlin he wants to express his feelings, not caring how it will be received by his father or the rest of the kingdom. Merlin, surprised Arthur is being so open, assumes he is referring to Gwen and agrees to take a bunch of flowers and a love note to her. Upon finding Gwen's house empty, Merlin happily leaves the flowers and the note on her table before leaving. He returns to the Council chambers and tells Arthur he has carried out his plan, much to Arthur's delight. As Gwen and Vivian walk in their direction, Arthur continues to profess his love while Merlin, still surprised, mentions it may still be impossible for Arthur and Gwen to be together as she is a servant.

After receiving a slap to the face, Merlin realises Arthur lusts after Vivian, and the flowers and note are still in Gwen's house. Rushing to Gwen's, Merlin finds her musing over the flowers and holding the note. Gwen tells Merlin her faith in Arthur's feelings for her have been restored. Merlin tells Gaius of Arthur's sudden change in character and Gaius reminds Merlin if Arthur is caught with Vivian, King Olaf would be furious; prompting Merlin to remember Arthur's mission of wooing Vivian by the end of the night. At Vivian's door, Arthur holds a tray of food and a rose, pleading for her to let him inside, only to be rebuffed. Merlin arrives and advises Arthur his advances are unwanted and they both leave Arthur feeling quite rejected. As Arthur lies in bed, disheartened, Merlin suggests he return to his old love, Gwen. Arthur states he didn't have an old love before Vivian and then finds a lock of blonde hair by his pillow, disregarding it as a poor cleaning effort by Merlin.

Merlin realises Arthur is enchanted and concludes King Alined and Trickler must be behind the scheme. Gaius orders Merlin to break the spell before Arthur involves himself in potential war with King Olaf. Trickler, who realises the enchantment between Arthur and Vivian has only worked one way, sneaks into Arthur's room and cuts a lock of his hair before using it in the same potion on Vivian. The following morning, Trickler enters Vivian's room to find her utterly besotted. In the courtyard, Gwen notices Arthur looks troubled. When asked, Arthur tells Gwen the gesture he made was not received well. Gwen, assuming Arthur is talking about her, assures him it was, leading Arthur to believe Vivian holds hope for the two of them to be together. Barging into Arthur's room, Vivian finds Merlin, who in turn urges her to leave. Trickler then passes on the message of Arthur's romantic intentions to King Olaf, who becomes enraged and storms towards Arthur's room.

After casting a sleeping spell on Vivian, Merlin hides her in Arthur's closet just as Arthur arrives. King Olaf, Alined, and Trickler soon after arrive and Arthur merely escapes a beating when Olaf assumes his daughter is hiding in the room. After accepting Arthur's forgiveness when Vivian is nowhere to be seen, King Olaf and company depart.

Merlin returns the still sleeping Vivian to her room while King Alined chastises Trickler for the failed plan. Gwen, believing still Arthur wants another chance to prove his love for her, slips a note under his door stating she will wait for him to meet her at sunset. Arthur assumes this is a note from Vivian, and scales the wall of the castle to get into her room. While Gwen waits by candlelight in her home, Merlin and Gaius find a counterspell to break Arthur and Vivian's enchantment. Merlin barges into Vivian's room to find Arthur and Vivian kissing and as he tries hard with the spell to break the enchantment, it fails as King Olaf, Alined and Uther arrive at the same time. Enraged, Olaf challenges Arthur to fight to the death, a challenge Arthur agrees to because he believes he would die for Vivian's love. In her house, a saddened Gwen blows out the candles. In the morning, Uther tries convincing Arthur not to fight but gives up when his son becomes adamant he will win in the presence of Vivian. Still upset, Gwen continues her duties for Morgana and is told Arthur is to fight to the death over Vivian, which upsets her even more. As she leaves Morgana's room, Arthur and Merlin encounter the upset Gwen. Arthur asks if she will wish him luck, to which Gwen angrily says she wishes he were more honest with her. The challenge begins, Uther stating it is to take place in three stages; fighting with the quarterstaff, the mace, and the sword. Noticing Arthur is still swooning over Vivian who is seated next to Morgana, Uther asks a final time if he understands the conditions before the fight begins. Arthur unable to focus on the fight at hand narrowly lives through the first stage of the duel, he is treated by Gaius, who concludes he has broken a rib and must not continue. Arthur simply replies the mace is his forte and while Vivian is in the crowd he can win. Gaius advises Merlin he must find someone to break the enchantment before Arthur dies. Merlin tells Arthur's story to the Great Dragon, the Great Dragon chuckles at the concept before telling Merlin the only person who can break the spell is the person whom Arthur truly loves. Merlin rushes to find Gwen at her house, still upset. She refuses to help Arthur, but upon learning about the spell agrees to follow Merlin. She approaches Arthur in his tent as he prepares for the final stage of the challenge and passionately kisses him. Arthur is at first shocked by Gwen's advances, but the enchantment evaporates. As Arthur realises it is Gwen kissing him, he enthusiastically reciprocates the kiss. Arthur then asks Gwen where he is and is told he is fighting King Olaf to the death, and he is losing. Gwen implores Arthur to win the fight and live for her before he leaves. As Arthur stares into the arena, Arthur asks Merlin to take care of Gwen if he dies in battle as, although she is seen as a dispensable servant to everyone else, she is anything but to him. The fight continues and Arthur ultimately disarms Olaf, but refuses to kill him as it is not the way to attaining peace. The fight over, Gwen returns to her home to find a single rose on her table and Arthur, who states he thought he should deliver it himself. Arthur apologises to Gwen for hurting her and assures her his feelings for Vivian weren't real and he has never loved another apart from Gwen. She accepts all of this, realising she had hurt Arthur (when she was with Lancelot). Despite Arthur professing his feelings, Gwen tells him he will find another person to love and she cannot be his queen. Arthur refuses to believe this and states things can change, but Gwen states until they do, she remains a servant.

As the kings leave Camelot having signed the peace treaty, King Alined punishes Trickler by shackling him and making him run all the way home. King Olaf and the still enchanted Vivian leave in tow and as Merlin and Arthur return inside the castle, Merlin smugly remarks he is aware of what happened with Gwen in the tent. Arthur doesn't deny it, but still threatens Merlin with death if he tells anybody about it. 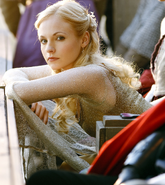 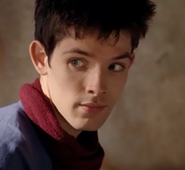 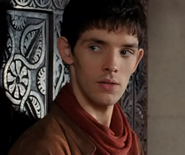 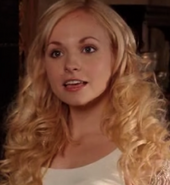 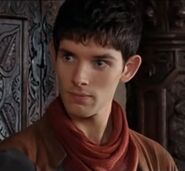 Rate this episode!
Retrieved from "https://merlin.fandom.com/wiki/Sweet_Dreams?oldid=212269"
Community content is available under CC-BY-SA unless otherwise noted.