“I sensed something, like there was someone there, watching me.”
— Percival to Gaius and Merlin[src]

Spirits are apparitions of the deceased that can appear to, interact with, and possess the living. Most of the spirits that appear in the series are human, but places and elements can also have spirits associated with them.

Humans (both magical and non-magical) appear to become spirits automatically after death. Most spirits reside in the Spirit World, but some are capable of existing outside of it (The Curse of Cornelius Sigan, The Coming of Arthur, A Herald of the New Age, The Death Song of Uther Pendragon).

Some sorcerers are unable or unwilling to enter the Spirit World death and instead remain in the real world. In most cases, these sorcerers have unfinished business among the living. For example, Cornelius Sigan tried to cheat death by trapping his soul inside an enchanted jewel (The Curse of Cornelius Sigan); Freya became the spirit of the Lake of Avalon in order to fulfill her dying promise to Merlin (The Coming of Arthur); and the Shrine Boy was unable to find peace until he had avenged his death (A Herald of the New Age).

The spirits of non-magical people are also capable of existing outside of the Spirit World, but they can only exit it with the help of necromancy or magical objects such as the Horn of Cathbhadh (Excalibur, The Sins of the Father, Lancelot du Lac, The Death Song of Uther Pendragon).

Interestingly, non-magical spirits who reside outside of the Spirit World, or who are summoned from it for a brief time, appear to retain their personality outside of it while spirits who escape or are released become shadows of their former selves. For example, Ygraine retained her personality and love for her son Arthur when she was briefly summoned from the Spirit World while Uther, who was released from it, became a caricature of himself obsessed with Camelot (The Sins of the Father, The Death Song of Uther Pendragon).

Spirits appear to possess a number of abilities. They can interact with both people and objects; appear and disappear at will; pass through solid objects; and possess the living.

Interestingly, spirits of non-magical people appear to gain magic when released into the living world. Uther, for example, was able to use magic to levitate objects and start a fire after he had been released from the Spirit World, but displayed no magical ability while inside of it (The Death Song of Uther Pendragon). Ygraine, however - who was merely summoned from the Spirit World, not released - demonstrated no magical ability outside of it (The Sins of the Father).

Both magical and non-magical people are capable of gaining knowledge after their deaths. Freya, for example, was aware that Morgause had used the Cup of Life to create an army of the undead, that the sword Excalibur could kill the undead, and that Merlin had hidden the sword in the Lake of Avalon (The Coming of Arthur); and Uther was aware that Arthur had married Guinevere (The Death Song of Uther Pendragon).

Spirits do not appear to be immune to magic. Merlin was able to use a stunning spell to repel Uther in The Death Song of Uther Pendragon, and Morgause may have possibly used magic to manipulate Ygraine in The Sins of the Father.

Many different types of spirits have appeared in the series. Some are capable of naturally existing in the living world while others have to be summoned with necromancy or magical objects or artifacts. 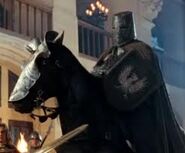 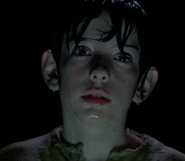 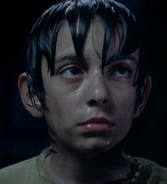 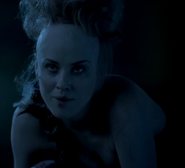 Add a photo to this gallery
Retrieved from "https://merlin.fandom.com/wiki/Spirit?oldid=213008"
Community content is available under CC-BY-SA unless otherwise noted.