“Let him feel the power of the mighty Sidhe!”
— Sidhe Elder on Merlin[src]

This Sidhe Elder, briefly known as Your Majesty was one of many Sidhe elders, who were kings among the Sidhe in Avalon.

When Elena is twenty, Uther Pendragon and Godwyn, who are old friends, arrange a marriage between her and Arthur. However, Merlin discovers the plot. Grunhilda informs the elder of this and he tries to kill Merlin in his sleep, although he is killed by Merlin's Sidhe staff, which he previously acquired from another Sidhe. Merlin later foils his plan and kills both Grunhilda and the Sidhe inside Elena. She and Arthur then agree they don't love each other and cancel the marriage (The Changeling).

The Sidhe Elder was a cunning, deceitful and callous creature of combined patience and hate. He was seemingly bound to the laws of the Sidhe and showed no emotion in banishing Aulfric from Avalon because the latter committed murder. This shows somewhat strong moral principle on the Elder's part. However, he was something of a sociopath as he revealed to Grunhilda that if she didn't make herself useful to them in her treatment of Elena, she would be immediately killed and cast aside without a moment's thought. The Sidhe Elder was obviously highly intelligent and astute, as he rather cunningly enchanted Elena as a child so that she became a Changeling, and then waited twenty years for the Sidhe to become a queen. Also, it is shown in that he chose a princess he knows will one day court the prince of Camelot. He was also unhealthily confident: When he declares that Merlin is to be executed, he personally takes it upon himself to kill the young warlock. This arrogance cost the Elder his life, as he was unable to anticipate that Merlin was an extremely powerful sorcerer himself. This one moment of narcissism was the sole reason for the Elder's death.

The Sidhe Elder, since being the patriarch of Avalon and his people, was obviously an exceptionally powerful creature. Like all Sidhe, he moved too fast for the naked eye to see and Merlin needed to use magic in order to counter the Elder's moves during their duel. His sole power, shown by other Sidhe's throughout the series, is his magical staff. It can manipulate or shatter objects, and also throw an opponent through the air. However, the staff was defenceless against another Sidhe staff, as exploited by Merlin. 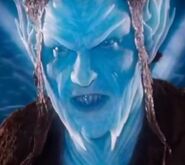 Add a photo to this gallery
Retrieved from "https://merlin.fandom.com/wiki/Sidhe_Elder?oldid=203483"
Community content is available under CC-BY-SA unless otherwise noted.