The Saxons were a league of people serving Morgana, who first appeared and were mentioned in Series 5. Saxons included both men, the Saxon army, and women, including Kara who was referred to as a Saxon (The Drawing of the Dark).

The Saxons had been in operation months before Series 5 began, which was three years after the events of Series 4 (The Sword in the Stone). Queen Annis proved this when she mentioned to Arthur that Saxons had began raiding villages months ago (Arthur's Bane). Arthur asked whether it was to raise an army but Annis responded it was to use them to find something in Ismere (The Diamair). It is unknown whether this is how the Saxons were amassed- this trait was in the Southrons, the army Morgana was previously allied with, who stormed villages searching for recruits (The Hunter's Heart).

The Saxons heavily characterised bandits, performing raids on villages in kingdoms to find men to help them achieve Morgana's goal in finding the Diamair. They were ruthless in achieving Morgana's goals. In Arthur's Bane, a camp in Asgorath was raided to find slaves to help find the Diamair, and Lochru, a seer, was left behind, dying. Morgana also paid good money for slaves to be handed over, Ragnor was a slave-trader who managed to capture Arthur and Merlin, amongst other unknown individuals. Camps were also raided in The Kindness of Strangers in the hunt for Alator, to find the true identity of Emrys, and in The Drawing of the Dark, where Camelot knights were killed for cargo that was bound for Camelot. This is also where Kara, the first female mentioned as a Saxon, was spotted. Merlin, seeing Mordred let Kara go, suspected Mordred was allied with the Saxons, before realising he had personal connections with Kara before she fell in league with Morgana and the Saxons.

“Some months ago, Saxons began raiding our villages. They're rounding up all the men they can find and taking them to Ismere.”
— Queen Annis

Saxons appeared in the first episode of Series 5, under the command of Morgana and the rebel druid Ruadan. They were serving Morgana in finding slaves to dig in the mines in Ismere. Morgana, when she learnt Arthur was going to Ismere to rescue his men, said she had patrols that would alert her so they could stop Arthur and the Knights in their tracks, but Ruadan said, according to his daughter, and a spy in Camelot, Sefa, they were taking an alternate path, from the East, as suggested by Queen Guinevere. Morgana went with Ruadan and a patrol of Saxons and managed to ambush Arthur, killing most of the knights as they were severely outnumbered and surrounded. Ruadan injured Arthur's back with a mace, and Arthur retreated with Merlin, who used magic to escape the situation. After they escaped, Morgana continued patrolling the area with Saxons, yelling at them to not just stand there and find Merlin and Arthur.

The Saxons remained loyal to Morgana after Ruadan died from a stab wound inflicted by Elyan when saving his daughter Sefa from imprisonment in Camelot, proving that Morgana was the undisputed leader of the army. Morgana or the Saxons also did not appear willing to help Ruadan save his daughter from Camelot, but that was because the full resource of the Saxons were focused on killing Arthur for when he arrived in Ismere and it would be easily detectable if Ruadan brought Saxons with him into Camelot. It cannot be fully assumed that Sefa was a Saxon herself, as she acknowledged she did not mean to cause men to die and only wanted to please her father. Gwen too understood this but had to treat Sefa as a traitor, as an act in front of the court, and to use her to lure Ruadan in. The Saxons demonstrated brutality towards their prisoners, using whips and patrolling very closely, particularly towards the knights of Camelot, including Percival and Gwaine. Gwaine, when caught off duty, was kicked unconscious by two Saxon guards, and may have possibly died if the Euchdag had not healed him. Arthur, when he arrived in the caves under the tower in Ismere, was able to outsmart the Saxons with his disguise, despite not being shirtless like all of the other men working there. He passed swords to the knights and they gathered and managed to outmaneuver many of the Saxons, although Merlin questioned that the Saxons seemed to just disappear, and the reason for this was unknown. It may have been due to Aithusa entering the caves and attacking Merlin, Arthur and Gwaine after the warning bell alerted Morgana. After Mordred betrayed Morgana when she attacked Arthur in the caves and saved Arthur and Merlin, Morgana left Ismere with only Aithusa, and the Saxons did not appear until The Kindness of Strangers.

Morgana relied on Odin and his army, The Dark Tower (Location), Daegal (redeemed), Aithusa, the Dochraid, and her puppet queen Guinevere to carry out her plans in the episodes between, but the Saxons were essential in her plans after she lost her puppet queen. Why the Saxons did not appear in between was not confirmed, but was most likely because Morgana wanted to strengthen the Saxon's forces (which ended up significantly outnumbering Arthur's by The Diamond of the Day) and had thought up plans which could directly kill Arthur and seize control of Camelot without the use of men. When Morgana discovered Emrys thwarted her plans in With All My Heart she resorted to using Saxon forces to violently hunt Alator, her old foe and former ally (The Secret Sharer). In the process the Saxons raided a camp once again, and Merlin found a symbol of Alator left behind. Morgana then led the hunt for Finna, in which the first named male Saxon soldier, Beroun, appeared by Morgana's side. This episode also marked the appearance of the Saxons first base apart from the tower in Ismere. At the end of the episode, Morgana declared war on Arthur, with the Saxon army.

The Saxon army only appeared at the end of the episode, but the first female Saxon, Kara, was introduced, and appeared to be fanatically against Arthur. Mordred had a past with Kara, leading Merlin to suspect Mordred was a traitor within the walls serving the Saxons and Morgana. After Kara was killed by Arthur, Mordred walked to Morgana's fortress, guarded by Saxons, and revealed the identity of Emrys, quickly regaining the trust of Morgana.

“Send word to the King. The enemy will reach Camlann by sundown tomorrow and we underestimated their forces. They outnumber us 5 to 1.”
— Sir Leon

At this point, Mordred was second-in command of the Saxons, even assigned the task of handpicking the best Saxon warriors to lead the night attack on Arthur's army and camp at Camlann. Part 1 marked the appearance of Ari, a magical ally of Morgana and a druid who was betrayed by Morgana to test the Gean Canach on, the last of its kind and a creature of the old religion which had the power to suck the magic out of someone. The use of this creature showed Morgana's ruthless methods and how she was willing to harm her own people to achieve her goals. This episode also marked the appearance of Eira who was personally hired and paid by Morgana to spy on Queen Guinevere and gather information from Gwaine. Eira confirmed Camelot's next action in relation to the war, found out where Merlin was headed and attempted to send a letter to Morgana saying where Arthur was headed (post-war) so she could catch him, before being caught by Guinevere and executed. (Part 2)

The Saxon army outnumbered Arthur's 5 to 1, and were ordered to strike through a secret passage at the most unexpected hour to outflank Arthur's forces. Thanks to Merlin communicating a warning to Arthur through the crystal caves, Arthur managed to prepare the army for battle. Two separate groups engaged in war.

The war pressed on, but Camelot's forces were clearly outnumbered. Arthur was about to take on several men by his lonesome, but was saved by a lightning beam that Merlin/Emrys cast from high above the plains of Camlann. The Saxons were forced to retreat, as Merlin took their army out with ease and Arthur's army drove them off. Aithusa was also disarmed by Merlin, and was not seen again. Morgana later choked one of her men until he collapsed, angered and devastated by Mordred's death, her loss of the battle, and the escape of Arthur. Despite this, her men continued the hunt and did not question Morgana taking it out on them. Merlin met Beroun and another unnamed Saxon out on the field, and when they detected he was with Arthur, he attacked them both with magic. Morgana only managed to find Arthur, wounded by Mordred's blade, when she captured Gwaine and used the Nathair on him to make him reveal their location, which was on the way to Avalon. Morgana travelled there by herself and attacked Merlin then taunted Arthur, wanting him to die by Mordred's hand. Merlin then stuck up behind Morgana with Excalibur, unbeknownst to her that it was an immortal blade- forged by the dragon's breath, just like the blade Mordred used to pierce Arthur- and stabbed her with it, resulting in her death. After Morgana's death, the Saxons disappeared, like the Southrons. It is assumed the remaining Saxons disbanded.

Beroun (left), one of the leading Saxons

Eira, traitor and spy, cared mainly for the reward

Sefa, daughter of Ruadan, she only wanted to serve her father

Ari, druid, victim of the Gean Canach and former ally

Ragnor, caught slaves for Morgana in Ismere, for the money

Kara, a fanatic whose death made Mordred join the Saxons

Mordred symbolising the Saxons in vision 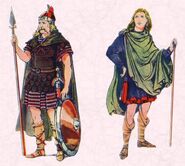