Sarah Parish is a British actress who played Lady Catrina in the Beauty and the Beast two-parter in the BBC drama series Merlin.

She has also appeared on another BBC show, Doctor Who. She has had series of roles as Northern women, including Dawn Rudge in Peak Practice (1993), Allie Henshall in Cutting It (2002), Annie Naylor in Trust and Natalie Holden in Blackpool (2004).

She starred alongside Debra Messing in the movie The Wedding Date, had a small role in The Holiday with Jude Law, Cameron Diaz, Jack Black and Kate Winslet, and appeared as the Empress of the Racnoss in the Christmas 2006 Doctor Who episode The Runaway Bride, where she played a giant spider-like alien from the dark ages. Special makeup and computer animation was used for the part. Her most recent appearance was in the one-off drama Recovery. She also starred in the BBC series Shakespeare Retold in which she played Beatrice. 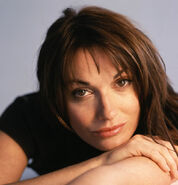 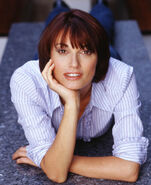 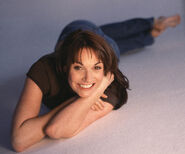 Add a photo to this gallery
Retrieved from "https://merlin.fandom.com/wiki/Sarah_Parish?oldid=212891"
Community content is available under CC-BY-SA unless otherwise noted.