The middle child of a Chilean diplomat father and homemaker mother, Cabrera was born in the city of Caracas, Venezuela. Santiago grew up in London, Romania, Toronto and Madrid. His family returned to Chile when he was fifteen years old and as a captain of the football team in high school, Cabrera focused on athletics before switching gears; he headed towards acting when his high school drama teacher encouraged him to try it. During his three years of training at the Drama Centre London, Cabrera honed his acting skills in productions of The Madras House, A Month in the Country, Napoli Milionaria, Britannicus, The Dutch Courtesan, The Strangeness of Others, A Field, Three Birds Alighting On, and played the title character in The Last Days of Don Juan.

In addition to his fluency in Spanish, English, French and Italian, Cabrera is skilled in tennis, hockey and scuba diving. On the January 20, 2007 episode of the NBC late-night program Vivo Mun2, Cabrera discussed his semi-professional football career in London before he fully committed to acting. He also stated that C.D. Universidad Católica of Santiago is his favourite team. Although he considers Santiago, Chile, his hometown, he splits his time between London and Los Angeles.

In May 2012, Julian Murphy confirmed that Cabrera will not reprise his role as Lancelot or participate at all in Merlin Series 5. 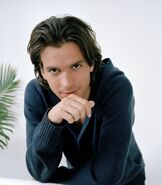 Add a photo to this gallery
Retrieved from "https://merlin.fandom.com/wiki/Santiago_Cabrera?oldid=200059"
Community content is available under CC-BY-SA unless otherwise noted.
FandomShop Newsletter Join Fan Lab