“If we cannot expose the true sorcerer, then we must invent one.”
— Merlin to Gaius

Queen of Hearts is the tenth episode of the third series of Merlin which was first broadcast on the 13th of November 2010. It marks the first appearance of Dragoon the Great.

Morgana is tormented by dreams of Guinevere becoming Queen of Camelot, as the fantasy drama continues. Encouraged by Morgause, she decides to reveal Arthur and Gwen's courtship to Uther, who will do whatever it takes to stop his son from marrying a serving girl. When his father banishes Gwen from the kingdom, Arthur makes the ultimate sacrifice and decides to leave Camelot with her. Determined to stop them, Morgana frames Gwen for the scandalous crime of enchanting the Prince. With destiny at stake, Merlin must risk everything to save her from a gruesome death.

As the episode begins, Gwen is crowned queen of Camelot by Arthur, as Merlin and Gaius proudly watch on. However, we discover that these events are simply being dreamt by Morgana, who awakens with a start. Sometime later she meets with Morgause who warns her that the dream is likely a prophecy. Morgause instructs Morgana to destroy Arthur and Gwen's relationship.

Morgana sets her plan into motion, separately suggesting to both Arthur and Gwen that they should spend more time together and not be ashamed of their love. A glum Arthur claims that Uther will not allow him to be with Gwen, but Morgana suggests that the king need not learn of their time together. On Arthur's instruction, Merlin invites Gwen to share a picnic with the prince. Though she is worried about the prospect of getting caught, Merlin eventually convinces Gwen to go along. He takes her deep into the forest outside Camelot, where Arthur is waiting. Morgana can be seen watching from afar.

Meanwhile, Morgana convinces Uther to accompany her on a horse ride. The two ride out into the forest, with Morgana secretly leading them towards the picnic. Just as Arthur and Gwen share a passionate kiss, the king and his ward stumble upon their hiding place. Returning to Camelot, an amused Uther believes that Arthur's relationship with Gwen is merely a fling. He tells Arthur that no real harm has been done, but forbids him from seeing Gwen again. When the prince protests that he is in love with Gwen, Uther decides to have her banished from the kingdom, claiming that it is for Arthur's own good.

Later, Morgana visits Arthur, who blames himself for Gwen's fate. He tells Morgana that he cannot bear to be parted from Gwen and is willing to leave with her. When she points out that this will mean giving up his right to the throne, Arthur assures her that one day he and Gwen will return to Camelot to take their place as king and queen. A frustrated Morgana realises that the future she foresaw has not yet been averted. While Merlin comforts a tearful Gwen, who is packing to leave, Morgana sneaks into Arthur's chamber and plants a magical poultice under his bed.

She then visits Uther, claiming that Arthur has never previously expressed any feelings for Gwen. When Morgana suggests that Gwen may have enchanted the prince, Uther orders that Arthur's chambers be searched. Sure enough, the guards soon find the planted poultice, which Gaius confirms could be used to cast an enchantment.

Uther has a bound Gwen brought before him and accuses her of using magic to seduce his son.

Arthur storms into the throne room and leaps to Gwen's defence, dismissing Uther's allegations. Uther reminds the prince that Gwen's father consorted with sorcerers and suggests that she is now seeking revenge for his execution. Uther declares that Gwen is to be burnt at the stake the following day. A desperate Arthur offers to leave Camelot with Gwen and surrender his claim to the throne, but Uther considers this action further proof that the prince is enchanted. Before parting, Arthur and Gwen share a dramatic, "last" kiss, until they are torn apart by Uther's guards. As a struggling Arthur is held back by the two guards, Gwen is dragged away to a prison cell, noticing a satisfied smirk on Morgana's lips as she goes.

Merlin visits Gwen in her cell and she shares her suspicions about Morgana's involvement in her plight. When Merlin informs Gaius of Morgana's plot, the physician reminds him that Uther will never believe that she was responsible. Merlin says: "If we can't expose the true sorcerer, then we must invent one." Merlin suggests that if another culprit were caught planting an identical poultice in Arthur's chamber, then Gwen would be freed. The boy wizard decides to use an ageing spell to transform himself into an 80-year-old. While Gaius makes a replica poultice, Merlin casts the spell, emerging from his chamber as an old man, with long white hair and a beard.

The transformed Merlin sneaks into Arthur's chamber, but is spotted by the prince. When Arthur captures Merlin and holds him at sword-point, he claims to be Dragoon the Great, a scheming sorcerer. Arthur begins to suspect that he has met Dragoon in the past, but Merlin uses magic to strike the prince with a flying helmet. Merlin escapes, but Arthur and his guards give chase and eventually recapture him.

Arthur brings the disguised Merlin before Uther and reveals that 'Dragoon' is the true sorcerer, much to Morgana's confusion. Merlin claims that he cast an enchantment on both Arthur and Gwen, suggesting that their relationship would bring shame on Camelot. He then uses this opportunity to criticise Uther and his hatred of magic, and also blasts Arthur for treating his servants poorly. Convinced by Merlin's trick, Uther declares that Gwen is to be released, with 'Dragoon' replacing her on the pyre.

Having explained Merlin's absence to Arthur by claiming that the boy is spending his day in the tavern, Gaius visits his ward in the cells. A desperate Merlin reveals to Gaius that he is unable to break the powerful ageing spell. Gaius reveals that he can concoct an antidote, but that it will take time.

Returning to his chambers, Gaius works throughout the night to brew the potion. In the morning, Arthur and his guard fetch 'Dragoon' from his cell. Gaius completes the antidote and rushes to the cells, but arrives just in time to see Merlin being led away. As Merlin is led outside to the burning pyre, Gaius joins the waiting crowd and indicates that he has the potion.

Merlin pretends to rush at Gaius, swearing revenge on Camelot, but secretly pockets the antidote. As he is led towards the pyre, Merlin uses magic to consume it in a massive fire-ball and uses the distraction to escape. Arthur and his guards chase Merlin through the castle. Hiding around a corner, he takes the potion, but it appears to have no effect. Just as Arthur rounds the corner, Merlin is restored to normal. He claims that Dragoon managed to elude him, and Arthur criticises his servant for what he believes to be drunken incompetence.

Sometime later, a freed Gwen and Morgana reunite and both women continue their friendly charade. As she leaves Morgana's chamber, Arthur meets with Gwen, explaining that Uther now believes their feelings to have been caused by an enchantment, though both of them know that is not true. If the king spots any sign of their true love, then Gwen will once again be banished. Arthur claims that he would have given up the throne to be with her, but Gwen insists that he should remain in Camelot, to become king and change the customs of the past. She tells the prince that she will count the days until he takes the throne and they can be together. They almost kiss, their lips less than an inch apart, but they hear footsteps so Gwen hurries away.

As the episode concludes, Merlin returns to his chamber, where Gaius waits. Having been ordered by Arthur to muck out his stables as punishment for his supposed drunkenness, he is exhausted and covered in horse dung. When the suspicious Merlin asks where Arthur got the idea that he had spent the day in the tavern, Gaius cheekily replies: "I really can't imagine." 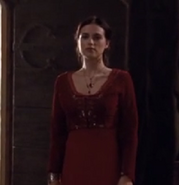 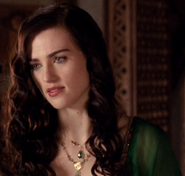