When the Dorocha attack Camelot, Percival risks his life during a night-time search by discarding his torch- fire, the only thing that can temporarily fend off the spirits, to carry three children to safety although Elyan saves him at the last minute. When Merlin is grievously injured by the Dorocha, Percival carries him to safety (The Darkest Hour).

While patrolling along with Gwaine, Percival meets a magical wolf. He, along with the other knights, is defeated and brought to Morgana, who enslaves him, forcing him to dig for her in order to find what she is looking for. Percival and Gwaine discuss the situation while they are working in a large cavern. All they know is that Morgana is looking for some kind of key, and she will do anything to get it. Gwaine then states that if she wants it so much, they must not find it.

Percival is a quiet man who prefers to let his considerable strength and combat ability do the talking. However, he is also gentle, kind, courageous and loyal. He was a good friend of Lancelot, though it is unknown when or how the two met. Percival is willing to fight to what might be his death for what is right. He pledged his loyalty to Arthur on the day he met him, even though he barely knew the Prince.

Percival first met Arthur after he had saved the prince from Morgana's men. He pledged his allegiance to Arthur soon after, and was made a knight of Camelot. Percival was very loyal to Arthur, risking is life for him time and time again. The two became good friends. 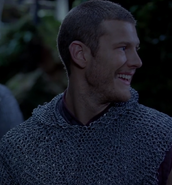 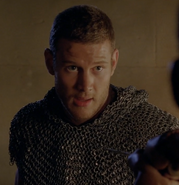 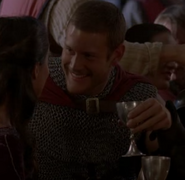 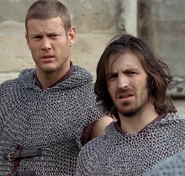 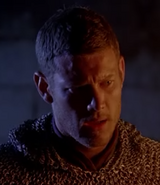 Retrieved from "https://merlin.fandom.com/wiki/Percival?oldid=143179"
Community content is available under CC-BY-SA unless otherwise noted.