“He always struck me as a rather kind and thoughtful soul.”
— Gaius on Sir Oswald[src]

Sir Oswald was a Knight and the companion of Sir Ethan. He died on his way to Camelot.

When a Melee tournament was announced in Camelot, Oswald and Ethan made their way to the kingdom. When they set up camp the two knights and their servant were killed by the two thugs Dagr and Ebor. After Dagr put Oswald's blood on an enchanted crystal he obtained to assume his form, Ebor did the same with Ethan. With the identities of the two knights they came to Camelot and fought in the Melee, wielding swords that merely appeared to be blunt so they could kill Arthur. However, they were both killed by Gwaine and Gaius then revealed their true form (Gwaine). 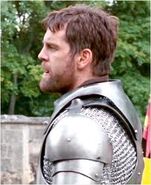 Retrieved from "https://merlin.fandom.com/wiki/Oswald?oldid=210394"
Community content is available under CC-BY-SA unless otherwise noted.