Start a Wiki
watch 02:42
'Merlin' Profile: Nimueh
Do you like this video?

Nimueh was a High Priestess of the Old Religion. An opponent of Uther Pendragon, she devised a number of schemes to wreck his kingdom before she turned her attentions onto Merlin, a young warlock, and Arthur, Prince of Camelot.

Twenty years before Merlin arrived in Camelot, Nimueh was a High Priestess of the Old Religion. She and Gaius practised magic together. She was friends also with King Uther Pendragon and his wife Queen Ygraine. Uther, desiring a son and heir, realized that Ygraine was incapable of providing one and asked Gaius to approach Nimueh with a request that she use the power over life and death to help his wife get pregnant. She did so, and as a result Arthur was born. However, in accordance with the laws of the Old Religion, a life had to be taken to restore the balance of the universe, and because of that Ygraine died in childbirth. Uther blamed magic in general and Nimueh in particular for her death and began the Great Purge, driving all who practised sorcery out of Camelot. While Gaius conformed to the New Religion, Nimueh was banished from the court, and vowed revenge for the death of all her friends (Excalibur, Le Morte d'Arthur).

Nimueh exacted some measure of this revenge after Merlin began his apprenticeship with Gaius. She created an Afanc, a creature conjured of the elements earth and water, with which she poisoned the water supply of Camelot. However, the plan was thwarted by Merlin, Arthur, and Morgana who destroyed the Afanc using the combined power of the elements fire and wind. Uther was dismayed when Gaius discovered a mark on the Afanc's egg that proved that the plague was Nimueh's handiwork (The Mark of Nimueh).

Nimueh swore revenge on Merlin for foiling her plan. Soon after that she posed as the handmaiden "Cara" within the court of Lord Bayard of Mercia. When Bayard travelled to Camelot to sign a peace treaty with Uther, Nimueh travelled with his retinue and traded out a chalice originally meant for Arthur with one that she had poisoned, and inveigled for Merlin to drink from it. She blamed the poisoning of the chalice on Bayard in order to sow discord and incite war, but the truth was discovered by Gaius before Camelot and Mercia could resume hostilities. She later led an unwitting Arthur to the caves under the Forest of Balor when he ventured to find the Mortaeus flower. She left him for dead as enormous spiders swarmed, but he was saved by a light sent by Merlin who knew he was in trouble (The Poisoned Chalice).

Nimueh later attempted to kill Uther by reanimating his brother-in-law Tristan De Bois, who had sworn to return from the dead and avenge his sister's death, as a wraith. Ultimately, Uther wielded the sword Excalibur, which had been forged by Guinevere's father, taken by Merlin to The Great Dragon, and imbued with ancient magic for Arthur – to defeat Tristan. Infuriated by her defeat, Nimueh fled Camelot once again (Excalibur).

When Arthur was bitten by the Questing Beast, Merlin travelled to the Isle of the Blessed and offered his life in exchange for Arthur's. Nimueh warned that such a trade would not be so simple; Arthur was brought back by the waters from The Cup of Life, but rather than sacrificing Merlin, his mother Hunith was taken instead, though Gaius attempted to sacrifice himself for Hunith to prevent Merlin from doing so. When Merlin returned, he found Gaius dead; Nimueh tried to convince him to join her, but he refused. The two battled and Merlin was hit by Nimueh's magic, which appeared to kill him. He survived, however, and summoned the power of the old magic to strike Nimueh with a lightning bolt, killing her, and saving Gaius (Le Morte d'Arthur).

Merlin mentioned fighting Nimueh in his rant (The Once and Future Queen). Arthur later learned from the spirit of his deceased mother that Nimueh had used magic to create him, but he was led to believe that this was a lie, even though this was the truth (The Sins of the Father). Merlin also mentioned Nimueh when he and Gaius discussed the Cup of Life, saying that he thought the Cup was destroyed when he killed Nimueh. Instead the Cup fell into the possession of a Druid tribe (The Coming of Arthur).

Nimueh appears as an embittered and selfish witch who wishes to bring ruin on Camelot and Uther Pendragon in revenge for the execution of thousands of magic users, including her friends and family. She displays a mischievous exterior, and appears to have some level of vanity as well. Her youthful appearance is a mystery, though in The Poisoned Chalice it is speculated that she can cast illusions through the use of magic. It's likely that in the past she was a friend of Gaius and of Uther and was less selfish and resentful.

As a High Priestess of the Old Religion, Nimueh was a very powerful sorceress who mastered control of the Elements as well as the power over life and death. She claimed to have the power of prediction, suggesting that she was a Seer. Using a stone scrying fount, she's able to remotely view events as they occur. She may also have been capable of magically communicating with individuals at a great distance, as suggested by her conversation with Uther the night before his duel with the wraith of Tristan de Bois. She was in possession of the Cup of Life, and had access to its tremendous power, something many other sorcerers (like Morgause) longed for.

She was able to easily stop Merlin's magical attack on her during their final confrontation by absorbing it into her hand. However, she didn't manage to kill him because of his natural resilience to magical attacks and he ended up seemingly slaying the powerful sorceress. Furthermore, despite her power of prediction, she was, according to the Great Dragon, at first unaware of Merlin's greatness.

She was also able to use the Elements of Water and Earth in order to create an Afanc. Moreover, it is assumed that she is an expert botanist as she used an enchanted Mortaeus flower to poison Merlin. She had the power of necromancy as she created a wraith using Tristan's de Bois corpse. She used the Element of Fire to create deadly fireballs. Finally, she was able to control at a very high level the Power of Life and Death due to the fact that she tricked Merlin by taking his mother's life instead of his.[1]

Series 1
The Mark of Nimueh
The Poisoned Chalice
Excalibur
Le Morte d'Arthur
Series 2
The Once and Future Queen (Mentioned only)
Series 3
The Coming of Arthur: Part One (Mentioned only)

Nimueh is based on the Lady of the Lake, alternately known as Nimue, Viviane, Niniane or Nyneve. Her role in the legend includes giving King Arthur his sword, Excalibur, raising Lancelot and being Merlin's apprentice and lover. After Merlin taught her all his secrets, she used her power to trap him in the Crystal Cave, effectively killing him. Thereafter she was an ally of King Arthur's.

There is little similarity between the Nimueh of the legends and the Nimueh in Merlin, as not only did Merlin apparently kill her (rather than vice versa), but Excalibur was created by Merlin who took a sword Guinevere's father made to The Great Dragon and forged it with his breath.

To further support this, in Series 3, it was Freya that gave to Merlin Excalibur, and Freya had also seemed to become the Lady of the Lake after her death. 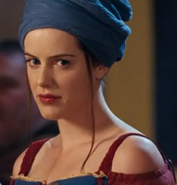 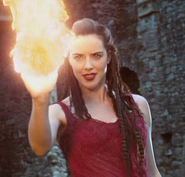 Add a photo to this gallery
Retrieved from "https://merlin.fandom.com/wiki/Nimueh?oldid=131014"
Community content is available under CC-BY-SA unless otherwise noted.