Morgause, a High Priestess of the Old Religion and maternal half-sister of Morgana, has worn several outfits. She wears different accessories and different cloaks as well. She has also been known to wear armour. Examples of clothes can be seen in the gallery.

Morgause disguised with an ageing spell

In the series four promotional images 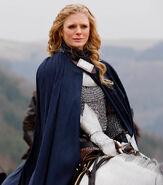 About to attack Camelot

Disguised as an old woman
Add a photo to this gallery

Retrieved from "https://merlin.fandom.com/wiki/Morgause%27s_Wardrobe?oldid=172667"
Community content is available under CC-BY-SA unless otherwise noted.