The Beginning of the End
The Nightmare Begins
The Witch's Quickening
Arthur's Bane: Part One

“You and the boy are as different as day and night.”
— Kilgharrah on Merlin and Mordred[src]

Mordred is a seeming Knight of Camelot and a druid who formed a close bond with Morgana, Arthur and Merlin, but Merlin betrayed him and have seemingly become enemies. Mordred was the first person to call Merlin by his druid name "Emrys ". Kilgharrah foresaw that Mordred would be responsible for the death of Arthur Pendragon and warned Merlin not to help the young druid. When Mordred had to choose between Arthur and Morgana he chose Arthur because he believed in the good inside him.

Kilgharrah had foreseen that Mordred would become a deadly enemy of both Merlin and Arthur, and according to his prophecy, Arthur would die at Mordred's hand. Nimueh is also implied to have foreseen this future because she told Arthur, "It is not your destiny to die at my hands" (The Poisoned Chalice).

After his master is turned over to the Knights of Camelot, Mordred uses his telepathy to call Merlin for help. Merlin helps him escape the guards and takes him to Morgana, who offers to help Merlin hide the boy. Uther declares that anyone caught hiding the boy will be executed along with the child. His arm was wounded by the guards when they chase him through the town, and he fell sick after the wound became infected. Although Merlin tries to treat the wound, he is unsuccesful and is forced to tell Gaius that he and Morgana are hiding the boy from Uther . Gaius agrees to treat the boy, but will not help them return Mordred to the Druids . Once Mordred recovers, Merlin, Morgana and Gwen try to sneak him out of Camelot ; but Morgana is caught by Arthur and they are taken back to the castle. They try for a second time to sneak Mordred back to his people, this time with Arthur's help. Arthur, with Merlin and Morgana's help, manages to take Mordred back to Iseldir and the Druids where the boy finally reveals his name. Merlin almost allows Mordred to be caught during the second attempt to sneak him out of Camelot due to the Dragon's prophecy, stating that Mordred is destined to kill Arthur, but eventually decides against this and helps him escape (The Beginning of the End).

Morgana later mentions Merlin's help in Mordred's escape as her motivation for accompanying Merlin to Ealdor (The Moment of Truth).

Life as a Druid

When Morgana's magic starts to reveal itself, she goes to the Druids for help. Mordred informs his people of who she is and he takes care for her. But when Uther's soldiers raid the camp, Morgana is 'rescued' and Mordred is surrounded by several soldiers after briefly reuniting with Merlin . But, using a single spell, he knocks over, and possibly kills, the soldiers and escaped with the rest of his people. Merlin is visibly shaken by what he witnessed Mordred do (The Nightmare Begins).

Mordred later on sides with a group of bandits, led by a sorcerer named Alvarr. Morgana steals a crystal and delivers it to the camp, and Mordred is pleased to see her. Back in Camelot, Merlin visits the Great Dragon and he is told of an ancient prophecy foretelling an evil alliance between Mordred and Morgana . When Merlin and the soldiers attack the camp, all are killed apart from Mordred, who escapes, and Alvarr, who is captured and later freed by Morgana . Merlin tries to stop Mordred from getting away by causing a branch to trip him, but Mordred uses magic on two spears so as that they kill the two guards who were chasing him. Following this, Mordred looks over at Merlin and speaks to him in his mind, saying: "I shall never forgive this, Emrys, and I shall never forget." Then he runs out of sight into the woods (The Witch's Quickening).

Mordred sees that his ally, Ragnor and his men are about to kill Merlin and Arthur, he prevents them from this, saying Morgana should decide for their fate. He then helps Arthur get up, expressing his gratitude for the latter saving his life. When Merlin says his name, he smirks, shocking the two men. Unbeknownst to Arthur, Mordred has been revealed as a vision to Merlin, as Arthur's demise.

Mordred and Ragnor then were taking Arthur and Merlin to Morgana in Ismere. Whilst he is acting somewhat kind to Arthur and Merlin as he claims that he owes Arthur what he calls a 'life debt'. When Arthur and Merlin escape after sparing Mordred's life, him and Ragnor went to Morgana. Morgana recognises him instantly however she then acts towards him in a way she hadn't acted to anyone in a long time; showing kindness and softness. But later, whilst Mordred was feasting with Morgana, Mordred reveals to Morgana that Arthur was previously, only days before, in his and Ragnor's 'grasp'. This angers Morgana, she then shouts extremely shocking slurs; Mordred tries to calm her down, however she doesn't flinch.

Morgana, with Mordred at her side, corners Arthur, and Morgana holds him at sword-point. Threatening to kill Arthur, whilst Merlin cannot do anything. Arthur then tells Morgana that she was once good and they were once friends, but Morgana shows no signs of mercy, this seemingly persuades Mordred to turn on Morgana to save Arthur. Mordred slits Morgana with a knife, it is unknown if his intentions were to kill her, but Morgana was on the ground, dying. Mordred was then taken to Camelot and knighted a Knight of Camelot. Merlin then asked him of his intentions and he claimed that they were only natural, he says he believes Arthur is good (Arthur's Bane).

The Great Dragon informed Merlin that Mordred, if allowed to live, would eventually bring about Arthur's death (The Beginning of the End), likely in conjunction with his foreseen alliance with Morgana (The Witch's Quickening). He was also seen in a vision forseen by the druid seer Lochru of him killing Arthur in combat, and the Euchdag futher told Merlin that Arthur's Bane is Arthur himself (Arthur's Bane).

At first, Mordred seemed to be a shy and innocent child. He normally spoke telepathically and rarely communicated with his voice. Morgana even started to think he was mute, because he spoke so little. He was frightened whilst trapped in Camelot, which could explain his selective mutism. When his father was executed Mordred sensed it even though he had not actually seen what had happened, manifesting his psychic abilities and his emotional bond to his father. Nonetheless, Mordred revealed a dark and vengeful personality when he told Merlin that he would never forgive or forget him after Merlin led Arthur and his knights to Mordred's camp and tried to stop him from escaping. He had a close bond with Morgana, who was the only person besides Merlin and a few other magic users who was able to hear him speak telepathically.

As an adult Mordred no longer spoke telepathically, even to Merlin. He was shown to be more confident than he had been as a child since he spoke commandingly to the men who captured Merlin and Arthur. He appeared to have changed, showing no hostility towards Merlin or Arthur and although he seemed to still have a bond with Morgana, he also appeared to realise that she had turned into a monster. Mordred eventually chose to save Arthur's life and stabbed Morgana although it is likely that he had not intended to kill her. He also promised to keep Merlin's magic a secret. Nevertheless Merlin had seen a vision of Mordred killing Arthur and for a while he thought that Mordred was Arthur's Bane.

Mordred was powerful in magic and his greatest ability was telepathy, using it to the extent that he rarely spoke with his mouth. Also simply by screaming, both telepathically and with his voice, he was able to smash glass in Morgana's chambers and blast back two knights that surrounded him, either knocking them out or killing them. He was also able to levitate two spears and impale two guards without saying a word. Kilgharrah said that Mordred was possibly powerful enough to wield the Crystal of Neahtid while Morgana was not.

Mordred was later made into a Knight of Camelot, after saving Arthur's life from Morgana. He stabbed Morgana, although he was careful not to inflict a fatal injury. In a vision that Merlin saw, Mordred was shown to be extremely skilled with a sword, being able to fatally wound Arthur Pendragon. Kilgharrah believed that Mordred would eventually kill Arthur and Merlin has been shown to be capable of reading the future with extreme accuracy, making it likely that Mordred will become a master swordsman in the future. 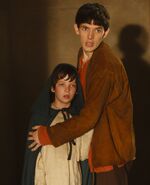 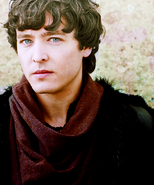 Retrieved from "https://merlin.fandom.com/wiki/Mordred?oldid=131719"
Community content is available under CC-BY-SA unless otherwise noted.