“Do as your king commands! Give your money to Pudsey, or I’ll chop your head off.”
— Uther

Merlin in Need is a special episode made for Children in Need 2008 during the course of the first series of Merlin, which was broadcasted on 14 November 2008.

A mysterious yellow creature with one eye appears in Camelot. Money has to be raised to appease it and save Merlin from the stocks.

Uther, Arthur and Gaius are discussing the peace within Camelot when they hear a loud growl. Merlin rushes into the throne room, telling them that he has seen a terrifying yellow creature with one eye.

Uther tells Arthur to ride out straight away and kill it. However Gaius consults his book of creatures and states that it is a "Pudsey" - a creature of charity - and says the only way to defeat it is to donate it money. In order to encourage the people of Camelot to do so, Gaius suggests someone amuse the people by going to the stocks and having fruit thrown at them - Merlin.

Merlin goes to the stocks and the people of Camelot give money in order to throw fruit and vegetables at him.

A large amount of money is raised by the people of Camelot and Merlin is allowed out of the stocks. Uther praises the people of Camelot for their generosity. Merlin stumbles into the throne room just as Uther states that he wishes to donate money to the Pudsey every year, to which Gaius says Merlin would be happy to help. Merlin rolls his eyes as Arthur throws a tomato at him.

The episode closes with Uther sitting in his throne telling the audience that as their king he orders them to give money to Children in Need - or he'll chop their heads off! 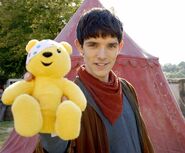 Retrieved from "https://merlin.fandom.com/wiki/Merlin_in_Need_(2008)?oldid=192980"
Community content is available under CC-BY-SA unless otherwise noted.