This is the name of the incredible TV series, for the character see Merlin.

“In a land of myth, and a time of magic, the destiny of a Great Kingdom rests on the shoulders of a young boy, his name; Merlin.”
— Kilgharrah's opening narration

Merlin (also known as The Adventures of Merlin) is a BBC fantasy drama which premiered on BBC One on 20 September 2008. It stars Colin Morgan as Merlin and Bradley James as King Arthur Pendragon. It consists of 13 episodes per series with a running time of 45 minutes. There were a total of five series. [1]

A Remedy to Cure All Ills

The Gates of Avalon

The Beginning of the End

To Kill the King

Beauty and the Beast: Part One

Beauty and the Beast: Part Two

The Sins of the Father

The Tears of Uther Pendragon: Part One

The Darkest Hour: Part One

A Herald of the New Age

The Sword in the Stone: Part One

The Sword in the Stone: Part Two

The Death Song of Uther Pendragon

The Diamond of the Day: Part One

The Diamond of the Day: Part Two

The Real Merlin and Arthur

Shine TV is set to be planning a spin-off series to the TV show with characters from The Adventures of Merlin. Johnny Capps and Julian Murphy are set to not take part in it whatsoever.[2] There are many rumours on whom the spin-off series will be set around, many fans suggest big characters such as: Kilgharrah, Aithusa, The Dragons, Mordred, Lancelot, Elyan, Gwaine, Alvarr, Enmyria, Nimueh, Freya, Balinor, Morgause, Vivienne, Cerdan, Iseldir, Aglain, The Druids, Tristan, Isolde, Mithian, Daegal, Alator, Finna, Sefa, Arthur Pendragon, and Morgana Pendragon, or simply the characters that were alive at the end of the finale of the series. such as: Merlin, Gaius, Leon, Percival, and Guinevere Pendragon. There has been no further information on this to date. 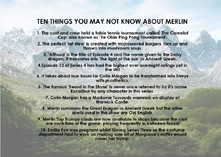