Mark Lewis Jones (b.November 16, 1964) is a Welsh actor who portrayed King Olaf in the episode, Sweet Dreams of the BBC series Merlin.

Lewis Jones has made notable appearances in a number of television productions including This Life, Holby City, Spooks, Murphy's Law, Waking the Dead andTorchwood. Perhaps his most significant role for BBC television, however, has been as Detective Inspector Russell Bing in the police drama 55 Degrees North in which role he played an outspoken, opinionated, and at times humorous police officer, in a complex and intricately crafted series.

He also played Detective Sergeant Ray Lloyd in police drama, Murder Prevention. His two most renowned appearances in Hollywood blockbusters were as Hogg the Whaler in Master and Commander: The Far Side of the World, and Tecton, a soldier in Troy.

In 2001 he also portrayed Igraine's second husband Uther Pendragon in the American TV mini series The Mists of Avalon. 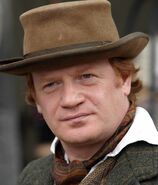 Mark Lewis Jones as Uther Pendragon in Mists of Avalon(2001)
Add a photo to this gallery
Retrieved from "https://merlin.fandom.com/wiki/Mark_Lewis_Jones?oldid=204689"
Community content is available under CC-BY-SA unless otherwise noted.