“How's your mace work coming along?”
— Arthur to Merlin[src]

A mace is a weapon used recurrently in Camelot. It's a heavy club with a spiked metal ball attached by a chain at the end of the object.

Arthur Pendragon used a mace to intimidate Merlin at their initial encounter. Whilst swinging it, he claimed that he had been "trained to kill since birth". He later used the mace when he hustled into a dispute with Merlin (The Dragon's Call).

Later on, Arthur used this weapon to train for the tournament and bestowed Merlin as his practice opponent (Valiant).

When Olaf challenged an enchanted Arthur to a duel, the mace was a weapon they used in one of the rounds. In this duel, King Olaf toppled Arthur. Arthur defeated King Olaf with a sword in a later round (Sweet Dreams).

When Arthur was training with fellow knights, he did a stingy impression of Merlin as a weakling who is afraid to fight. Merlin, however, got back at him by using magic to distract Arthur while he was dodging maces, so that he was hit by one of them in the stomach (The Tears of Uther Pendragon).

In the Decennial Tournament, an unknown opponent used a mace in his round against Uther. Although he seemed skillful with the weapon, he was easily defeated by Uther (The Sorcerer's Shadow).

Later when Merlin, Arthur, and the knights were riding through the Valley of The Fallen Kings and were attacked by bandits, Merlin was injured in the chest by a mace (A Servant Of Two Masters).

In Arthur's Bane, the Druid Warrior Ruadan used a mace to best the three best knights of camelot. Then he later bested Arthur Pendragon. He came to close to killing Arthur, and if it wouldn't have been for Merlin would bolted away the Druid Warrior, Arthur would have been dead. 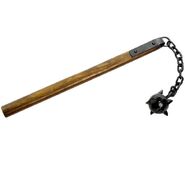 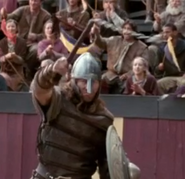 Add a photo to this gallery
Retrieved from "https://merlin.fandom.com/wiki/Mace?oldid=203613"
Community content is available under CC-BY-SA unless otherwise noted.