Leander Deeny portayed the character George in the episode, A Servant of Two Masters of the BBC series Merlin. Recently, Deeny appeared in the 2011 film, Captain America: The First Avenger.

Leander Deeny was born in New York to Irish parents on December 2nd 1980. From there, they moved in declining circles of glamourousness to Antibes, then London, then Swindon, then Salisbury.

He was educated at St. Hugh’s Preparatory School, Bishop Wordsworth Grammar School, Oxford University (Lincoln College), and the London Academy of Music and Dramatic Art, which he left last summer.

He has acted in Tv (Skins, Merlin) and Film (Atonement, Captain America: The First Avenger). In between acting, he has worked as a childrens’ entertainer, a receptionist, a flyerer, and an author of children's books

At Oxford he was President of the Oxford Revue, editor of Isis Magazine, a deeply ineffectual member of OUDS (Oxford University Drama Society), and a columnist for The Cherwell. He also portrayed Dorian Gray at the Oxford Playhouse in his third year.

Between the ages of 4 and 5 he refused to leave the house unless dressed as a jockey. He likes whisky, cookery, rock and roll, and falconry. He lives in Peckham. He is five foot seven. Which is the same height as Tom Cruise. But much taller than Prince.

Leander Deeny also works as an actor. He graduated from LAMDA in 2006. He is represented by Roxane Vacca Management. 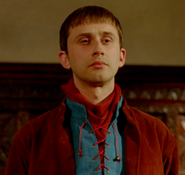 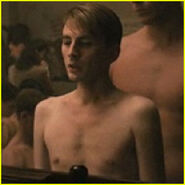 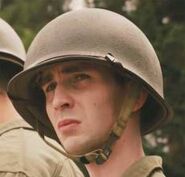 Add a photo to this gallery
Retrieved from "https://merlin.fandom.com/wiki/Leander_Deeny?oldid=214446"
Community content is available under CC-BY-SA unless otherwise noted.