Laura Donnelly portrayed Freya, the young cursed druid girl and the Lady of the Lake, who fell wildly in love with Merlin. Her character first appeared in The Lady of the Lake in Series 2. Her character later appeared to Merlin in a scrying pool to assist him in The Coming of Arthur in Series 3. Her character also returned briefly at the end of series 5, the complete series' finale, but as only her arm appeared, Laura did not return for the role. Instead, an uncredited actor (possibly a professional diver, and supposedly male) did.

She is also known for appearing in Casualty, Hex, and as a main character in the Irish film Insatiable (2008).

She recently starred in Best: His Mother's Son, a BBC drama on the life of George Best, playing Best's sister, Barbara.

Laura appeared in the TV show, The Bill (1 episode, 2006) as a character named Jody Macmillan.

Laura Donnelly appeared in the film, Dread (2009) as Abby. and in Right Hand Drive (2009) portraying a character named Ashley. 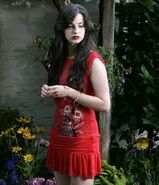 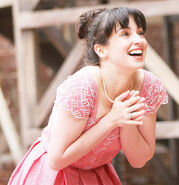 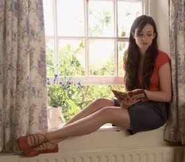 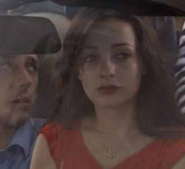 Add a photo to this gallery
Retrieved from "https://merlin.fandom.com/wiki/Laura_Donnelly?oldid=213188"
Community content is available under CC-BY-SA unless otherwise noted.