Lamia is the eighth episode of the fourth series of Merlin which was first broadcast on the 19th of November 2011.

A mysterious illness draws Merlin to a distant village as the magical drama continues. But it soon becomes clear there is more at stake than just his well-being as something sinister turns the air sour. Far from home and with no one to trust, Merlin becomes embroiled in a deadly game of cat and mouse. No longer sure who is the hunter and who is the hunted can the young warlock survive long enough to uncover the truth?

An old friend of Gwen's comes to Camelot seeking help because her village has been struck by a mysterious disease, which nothing can cure. Gaius is too busy in Camelot taking care of a sweating sickness to come and help the village, so he suggests that Merlin goes instead. Arthur is skeptical of this idea but Gaius persuades him Merlin is up to the job.

Merlin, Gwen, Leon, Percival, Gwaine and Elyan set out for the village. When they arrive, Merlin tries to treat the sick villagers but not even his magic works, making him suspect magic is involved in the sickness. He decides to return to Camelot to fetch Gaius, as only the physician's experience can help the sick people. On the way back to Camelot, the group comes across a gang of bandits who have captured a pretty young woman. Gwaine and the others knights attack, knocking out or killing the bandits and saving the woman, who is extremely nervous and afraid of Merlin but once Percival comforts her, she says her name is Lamia. After they rescue Lamia, the knights, starting with Percival, become aggressive and hostile, especially to Merlin. As their behaviour changes, the task of returning Lamia to her home slowly becomes more important to the knights, rather than heading back towards Camelot, making them change course and head towards an unknown destination.

Meanwhile, back in Camelot, Arthur becomes concerned about Merlin, Gwen and the knights disappearance and he along with Gaius and Agravaine, go to the village. After questioning the villagers and the single survivor of a group of people who had originally caught the girl, Gaius concludes the creature responsible for the sickness is a Lamia, a creature of magic which has the appearance of a girl, the power to control men, kill their victims with a kiss and transform into a gigantic monster. Arthur and Agravaine search for Merlin, Gwen and the knights while Gaius remains in the village to cure the sick people. Meanwhile, Leon and Gwaine fight with each other until Elyan and Percival break the fight. Merlin tells Gwen he suspects Lamia, is responsible for their strange behaviour. That night, the Lamia seduces Elyan and with a kiss, causes him to succumb to her power.

The knights later find Elyan gravely ill and Gwen tells Merlin she knows Lamia is responsible for Elyan's sickness. Merlin attempts to convince the knights to return back to Camelot so Elyan can be cured but they angrily refuse as Lamia convinces them to go to a place of shelter. As they go to the shelter Lamia suggested, Gwen ties a cloth to a tree so Arthur will find them. Although Agravaine tries to prevent Arthur from finding Merlin, Gwen and the knights by covering up hoof prints, Arthur finds the cloth clue tied to the bushes, and recognising the cloth as belonging to Gwen, vows to keep looking, even if they have to search through the night.

When Merlin, Gwen, and the knights reach the shelter, an abandoned castle, Lamia disappears, forcing them to search for her while Merlin and Gwen remain behind. Gwen tells Merlin there is something about him as he was not affected by the Lamia's power and she was also not affected. The Lamia, during this time, causes Gwaine and Percival to succumb to her. Leon returns to his senses when he sees Percival fall at the Lamia's hand and he attacks her, only to be knocked out by the creature. Merlin leaves to search for the knights and sees the Lamia kissing Leon, telling her he will not be easy prey as he has magic.

A magical duel ensures between them until Merlin levitates Leon's sword at her, causing her to retreat. However, the Lamia survives the attack and transforms into its monstrous form. Gwen, when hearing the struggle, defends Merlin until the Lamia knocks her to the ground. Just as Merlin is about to attack the creature with his magic, Arthur arrives with Agravaine and kills the Lamia with a spear.

After Arthur, Merlin, Gwen and Agravaine return to the village with the sick knights, Gaius cures the knights as well as the sick villagers, and they return to Camelot. 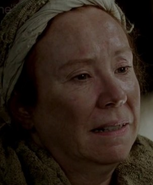