“When the fires of Idirsholas burn, the knights of Medhir will ride again.”
— Gaius[src]

The Knights of Medhir were created over three hundred years ago by a powerful sorceress called Medhir. A group of seven Knights of Camelot were seduced by a sorceress's call. One by one they succumbed to her power, becoming a terrifying and brutal force that rode through the lands leaving death and destruction in their wake. They were only stopped when the sorceress herself was killed, as without her power to animate them, they became lifeless. It is said they can wake again if a strong enough power summons them. While summoned, no weapon can harm or kill the Knights. Only if the spell animating them is broken, they can be stopped (The Fires of Idirsholas).

Morgause awakes the knights of Medhir 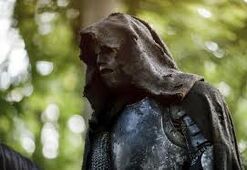 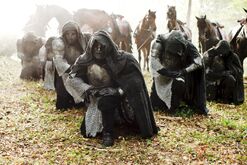 Retrieved from "https://merlin.fandom.com/wiki/Knights_of_Medhir?oldid=214298"
Community content is available under CC-BY-SA unless otherwise noted.