Following years of running, due to the persecution of those with magic, Kara was set in her beliefs, to the point of being blinded by them. She rejected all Arthur's attempts at change, seeing him as no better than his father, and accusing him of murder. She claimed to fight for freedom, and the right to be who she was. Despite this Kara was also dark and possibly delusional, and had no problems with murdering in cold blood, seeing all connected to Camelot as evil. Her hatred of Arthur was so strong she rejected her chance of freedom, claiming to have committed no crime, despite being on trial for murder and not for magic.

However she also had  a nicer side, and loved Mordred, to the point where she refused to betray him to Arthur. 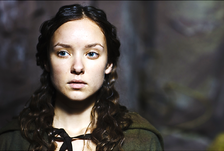 Add a photo to this gallery
Retrieved from "https://merlin.fandom.com/wiki/Kara?oldid=161949"
Community content is available under CC-BY-SA unless otherwise noted.