“I know Kanen's kind. He'll be back. And when he is, you must be ready for him.”
— Arthur to the people of Ealdor[src]

Kanen was a brigand who terrorised the country of Essetir, in particular the village of Ealdor.

His forces raided the town for provisions, but Matthew held back rations, and Kanen gave the villagers one week to make up the difference. He returned a week later, and discovered that Matthew had hidden provisions in an underground cellar; he attacked and nearly killed Matthew before Merlin, Guinevere, Morgana, and Arthur arrived. Kanen's band left and Kanen killed Matthew the next day; a day later, Kanen returned with more brigands and launched the Battle of Ealdor. He was later killed by Arthur in the battle, and in his final moments he slayed William who died protecting Arthur.

Kanen was a brutal man who fought only to kill and was indifferent about the fact that the people of Ealdor would starve if he stole their food. He was also vengeful, claiming that Arthur, Merlin, Morgana, Gwen, Hunith and the people living in Ealdor would pay for killing his men with their lives. This could indicate that he cared about his men; alternatively he could have simply been frustrated that they had prevented him from collecting the villagers' food. His vengeful nature was also shown when he challenged Arthur to a duel, after Arthur organised the defence of Ealdor (The Moment of Truth).

Kanen was a ferocious and merciless fighter and wielded an axe in combat. He fought with Arthur during the final moments of the battle of Ealdor and after Arthur disarmed him during their duel, he wielded a sword instead. He was shown to be a cunning and unpredictable swordsman. Though he held his own against Arthur for a short time, the prince proved to be the superior fighter and killed Kanen. He was also proficient with a crossbow and would have killed Arthur if not for the intervention of William.

Series 1
The Moment of Truth 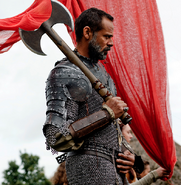 Add a photo to this gallery
Retrieved from "https://merlin.fandom.com/wiki/Kanen?oldid=212655"
Community content is available under CC-BY-SA unless otherwise noted.